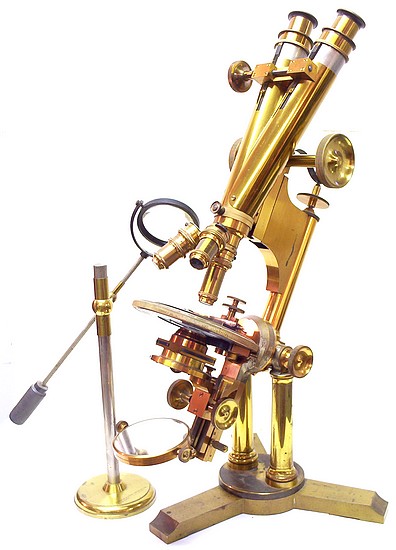 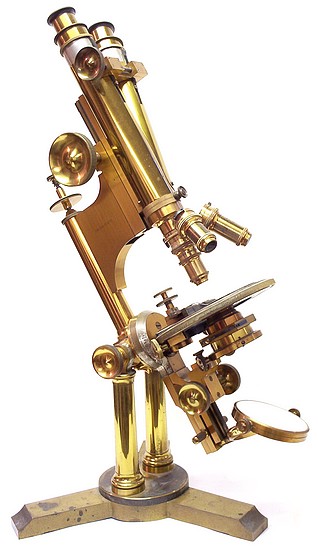 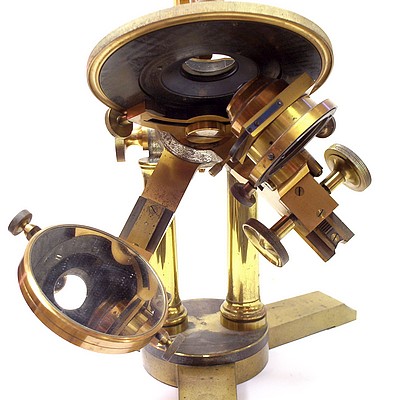 The mirror arm and condenser arm can be positioned independantly allowing use of oblique illumination. 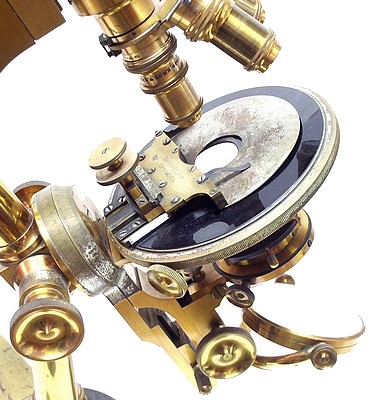 The stage is of the Turrell type with full graduated rotation and centering adjustments. The thin metal plate moves on the black glass surface. 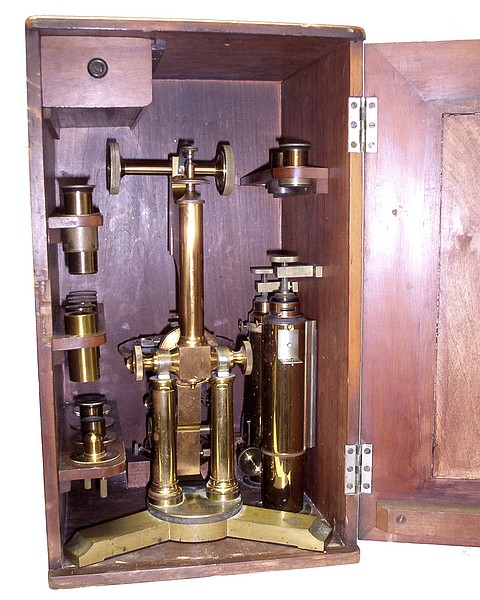 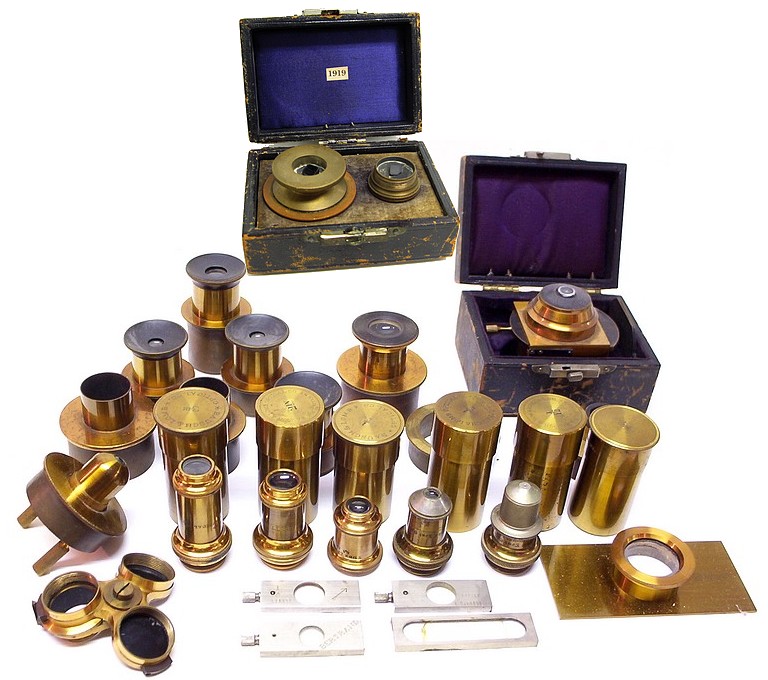 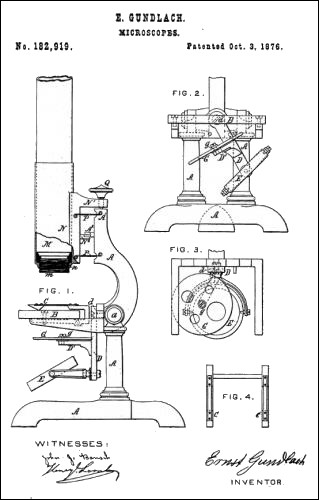 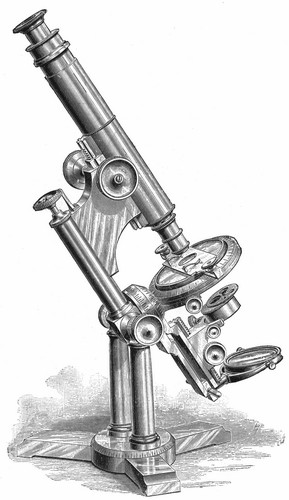 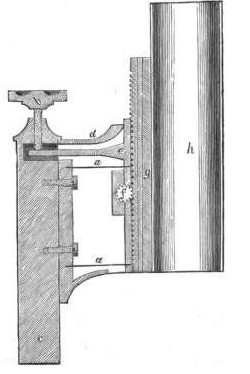 From The Journal of the Royal Microscopical Society, 1882

Bausch and Lomb Optical Co.'s Professional Microscope. Fig. 113 (cut from America, is one of the best woodcuts of a Microscope which we have seen) shows the "Professional" Microscope of the above Company. Its specialities are the frictionless fine adjustment (described at p. 683), the glass stage and slide-carrier (described at p. 687), the centering of the substage (of which we have no detailed description), the two draw-tubes which allow of more than the ordinary variatious of length, and the mirror and substage bars which are separate and can be moved independently of one another, or simultaneously when the arm on the mirror is placed in a recess in the substage bar.

Bausch and Lomb Optical Co.'s Fine Adjustment. Fig. 126 represents the original of the fine-adjustment referred to at Vol. I. (1881) p. 110. Two strong parallel blades of finely tempered steel, a a, are securely fastened on one end to the back of case Fig. 126. d, on the other to the arm e, which carries the rack and pinion, b shows the micrometer screw, which is fitted to the upper part of the upright arm c, f is the pinion, g the rack and slide, h the tube. Two screws fasten the adjustment case d to the pillar c. An arm projects from the part e and passes into a recess in the pillar c. The springs support the entire body, and as their tension is upward, the projecting arm bears continually against the micrometer screw b, and it is evident that tho distance traversed by tho screw involves the same movement of the arm e, and consequently the body. The only points of contact are at the ends of the springs a, a, where they are fastened respectively at d and e, and on the micrometer screw, and as in the former there is absolutely no friction, there is no wear; while that which may eventually take place in the latter is taken up by the force of the springs.

The points of excellence claimed by the makers for this adjustment over all others, are the following: 1. It moves the entire body. 2. It is extremely sensitive and direct. 3. It has no lateral motion or displacement of the image, while adjusting. 4. It has absolutely no lost motion. 5. It can in no manner deteriorate.

Extracted from the 1892 Bausch & Lomb catalog:

As high power objectives are in more common use than was formerly the case, particularly in biological research, it had been found that a more delicate movement than the ordinary fine adjustments is desirerable, and the one we now offer is the most simple as well as efficient, and particularly valuable inasmuch as it can be applied to almost every existi:ng instrument In which the micrometer screw is attached to the arm. It is put in connection with the micrometer screw, and comes into play at will by tightening the thumb-screw at the top. The one milled head operates one or the other. It can be made to almost any degree of fineness, but that which we have found most desirerable is the 1/75 in for the fine, and 1/300 in for the Differential Screw fine adjustment, for revolution of the milled head. 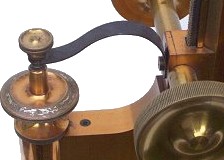 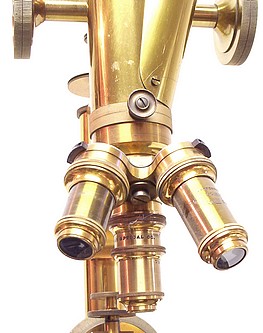 The Wenham prism on this microscope utilizes a patented mechanism for its mounting as described in the 1884 US patent 293,217. The binocular arrangement of the Wenham tube used with the Bausch & Lomb microscopes is described in the Sharp & Smith Catalog of Surgical Instruments, 1889 as follows:

The purpose of the binocular microscope is to give a stereoscopic vision of objects whereby their form, relative distance and position of the various parts are most plainly seen. The effect is striking and is so totally different from the image in the monocular, that it can only be fully appreciated after it has been observed. Different methods for accomplishing the same purpose have been used, but the one in most general use is that devised by Mr. Wenham;by this plan the rays coming from the objective are equally divided, one-half of them passing through the vertical tube without alteration, while the other half is reflected by the interposing prism, thus giving almost equally illuminated field in both eye-pieces. The prism is mounted in a sliding box which is fitted to the nose-piece, and by which it may be put in its proper position or partially withdrawn. The great advantage of this system is that the instrument may be used as a monocular by withdrawing the prism; but in this respect it is open to serious criticism, especially of late years, in that the size of the prism and its mountings are limited by the internal diameter of the nose piece and so decreases the opening for the passage of rays, that many of the advantages of good objectives have been lost. Provision has lately been made to remove the nose-piece altogether when used as a monocular, and replace it with one which is free from obstruction; this however consumes time, and is not always practical.

For some time it has been our purpose to obviate these difficulties, and we have succeeded in devising a number of improvements of which we have adopted the one described below; it is at once the most simple and effective. It is contained in the nose-piece which is attached to the tube; the prism, instead of being mounted in a sliding box, is fixed in a swing carriage, b which the axis is in c. The carriage b is fixed to the steel spindle r, which in turn passes through a sleeve in the nose-piece, and is provided with a milled head, by which it is turned; the spindle and sleeve are arranged with stop-pin to limit the motion of the prism; e is the vertical, and f the oblique tube. As the posterior system of any objective with society screw does not exceed 15 m. m., we have made the opening d in the nosepiece of this size. When the prism a is in position for binocular vision, as shown in full lines, all the rays coming from the objective will be utilized, whereas when the instrument is used as a monocular and the prism is swung to the side of the tube, as shown in dotted lines, the opening d is left without obstruction. In addition to this advantage, the fittings are all close, so that there is no opportunity for the dust to enter, and being cylindrical, there is practically no wear. The draw-tubes are provided with adjustment which works them simultaneously, and accommodates eyes different distances apart. A tightening screw is also provided, whereby the tubes may be fixed at any point at which they are set.

Beside the above advantages, this form of binocular and the arrangements of the prism permit the use of higher power objectives than is the case in others. Thus a 1/4 inch objective gives an excellent stereoscopic effect, while a £ may be made to do so, with some practice. This is of considerable importance in all cases where the above powers are required.

The microscope configured with the Petrological tube 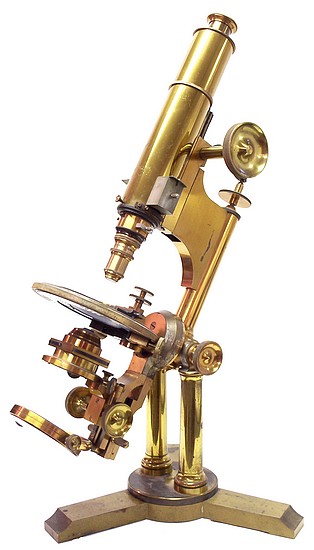 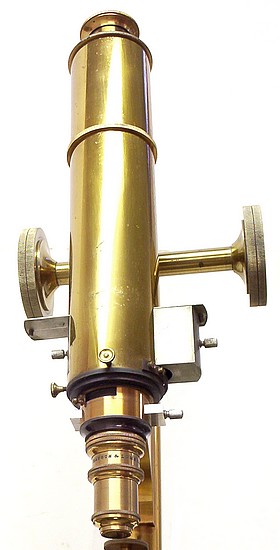 Extracted from the 1892 Bausch and Lomb catalog:

The rapidly increasing interest in microscopical work in geology which is manifested in all parts of: Americas, together with the difficulty and expense of importing instruments for this purpose from Europe seems warrant the construction of a fully equipped petrographical microscope at home.

The importance of supplying this want in the United States was suggested by Dr. George H. Williams, Associate Professor of Mineralogy and: Inorganic Geology in the Johns Hopkins University, Baltimore who has specified various points necessary to a microscope destined especially for rock-study, and who has approved the complete instrument as submitted to him for examination. It is believed that this microscope embodies the best features of the European instruments and that it is superior to any them now offered for the same price. The cut and description apply to the microscope as applied to our Model stand in which it is exceedingly compact and low priced; but we attach it as well to the Universal and Professional stands in which connection they are proportionally elaborate. The essential features of the Petrographical Microscope are as follows:

1--The lower Nicol (polarizer): is mounted in a cylindrical box beneath the stage to which it is held by a swinging arm so that it may be thrown: instantly to one side if desired. This polarizer may be vertically raised or depressed by rack and pinion movement, and is also capable of an axial revolution upon a graduated silvered circle. It is provided with a compound lens for securing converged polarized light, which may be removed at will.

3--The nose-piece is provided with a special adapter to which the objective may be screwed. Into this are made to slip four of the following accessories each mounted in a separate brass frame: a, Bertrand's lens for magnifying the interference figure: b, a quarter undulation-mica-plate: c, a quartz wedge: d, a Klein quartz-plate, or a gypsum-plate with red first order.

4--The centering screws are provided in the nose-piece for accurately centering the various objectives.

5--The upper Nicol (analyzer) is enclosed in one side of a double-chambered box, the other side being left vacant, So that it may be slid in and out of the tube at will, without at any time leaving an opening through which dust may enter.

No. 570, Model Petrographical stand as described, with any of our Huyghenian eye-pieces, in: polished: case with handle; lock and key, drawer for accessories and receptacles for eye-pieces and objectives... $108.00

The petrological features of this microscope are based on the 1887 design of Dr. George H. Williams, Professor of Mineralogy and Inorganic Geology, at the Johns Hopkins University. See: The American Journal of Science, pg. 114, 1888. This design was adapted to other instruments in the B&L product line. For instance, elsewhere on this website there is an example where these petrological features are applied to the B&L "Model" microscope.

The history of the development of this microscope is described in the article: