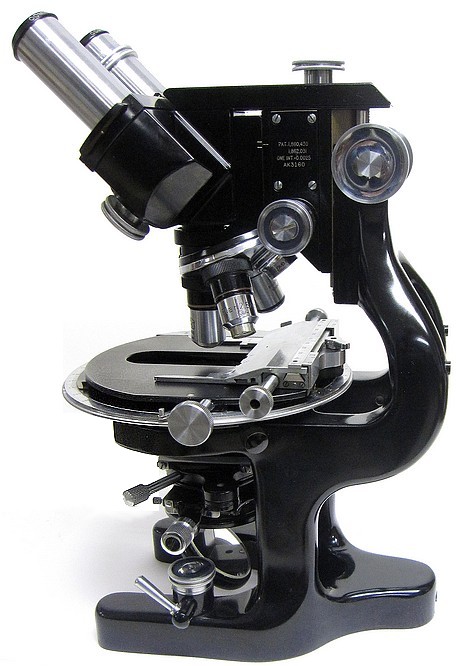 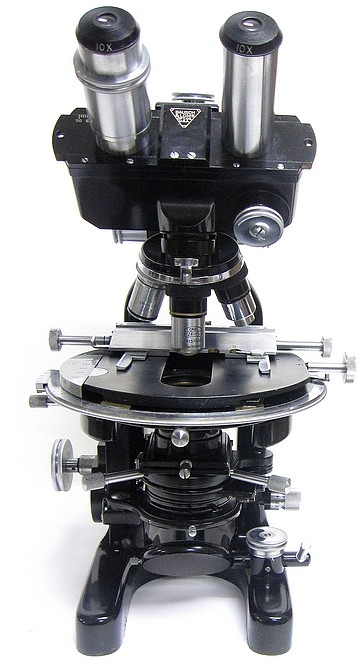 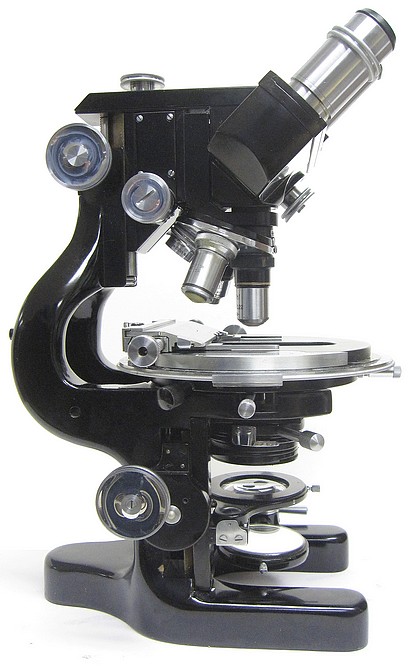 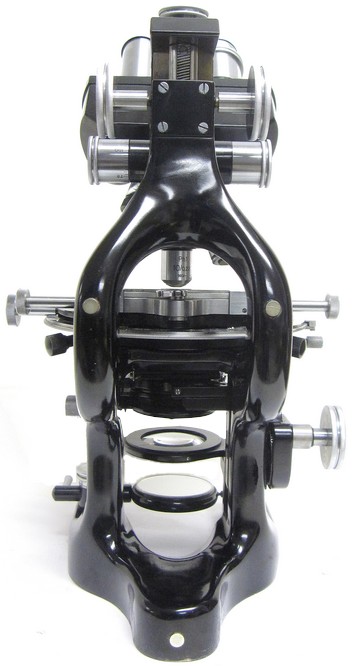 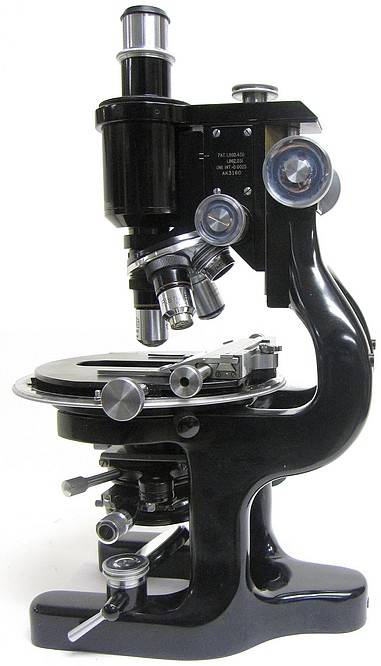 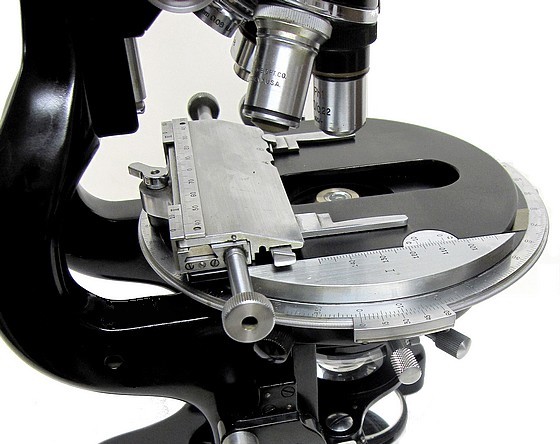 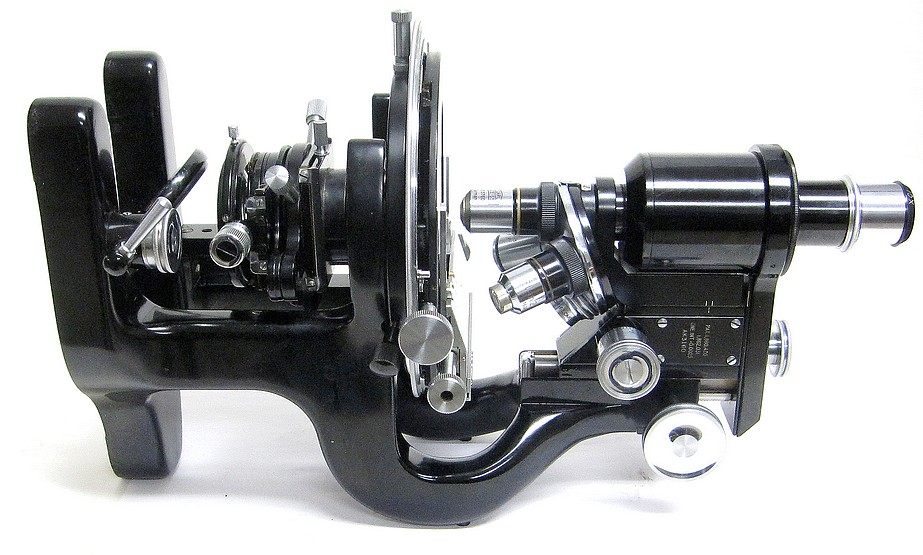 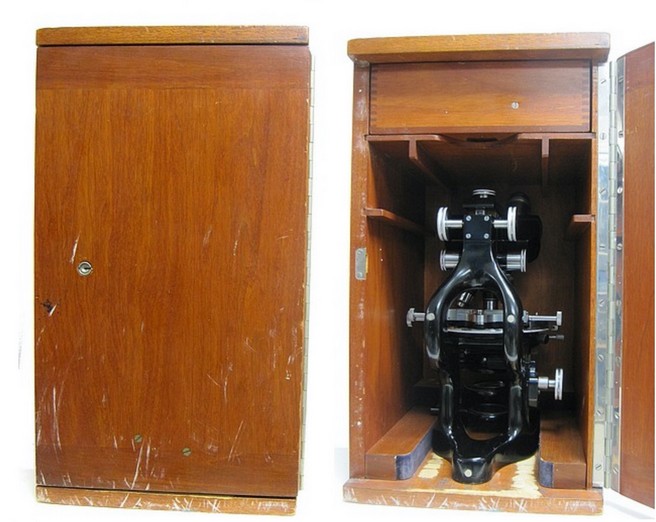 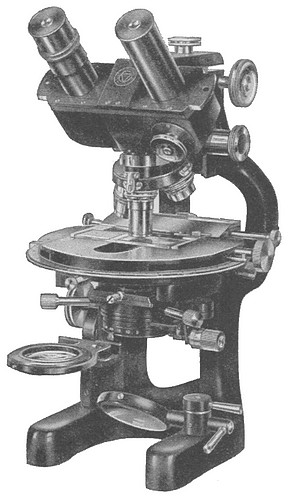 In 1929, Bausch & Lomb introduced a microscope having some novel features. It was called the DDE model. It represented their most advanced "Microscope for Research and Photomicrography". It remained the top of the line model up to the 1950s. It was supplied with both monocular and binocular tubes. It could be used in a vertical position for regular work or in the horizontal position for photographic work. On the basis of the serial number, the particular example shown on this page was produced in 1941.

Below is an image taken from the cover of a 1939 issue of the magazine Science. It illustrates one of the great innovations introduced with this model in that the stage is placed directly in front of the user with the illuminating source behind the microscope thus allowing the user full unhindered access to the stage. This innovation was influential in the design of future microscopes made by many of the leading manufacturers of the 20th century. 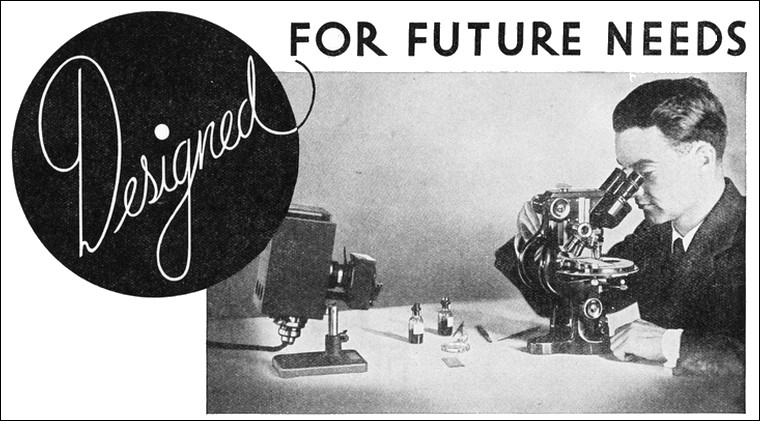 The DDE microscope in the horizontal position arranged for photographic work

The following text was taken from the brochure intitled Bausch & Lomb DDE Microscope for Research and Photomicrograpy, 1952 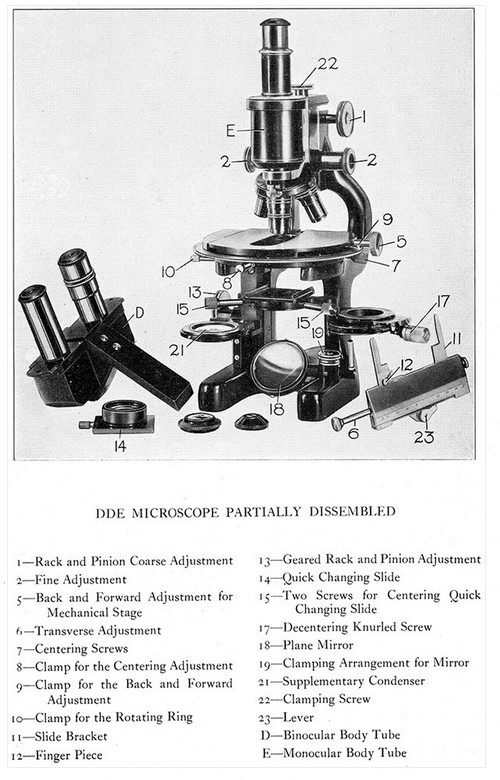 The DDE Research Microscope incorporates the suggestion of Dr. Lester W. Sharp of Cornell University and his associate, Dr. L. F. Randolph, of the U. S. Department of Agriculture and Cornell University, of placing the arm at the front of the instrument, so as to give free access to the object, stage, objectives, substage, and mirror and thus offer greater convenience and comfort to the user. With the further aim of providing extreme rigidity, the arm and pillars are made in one piece. When the instrument is used for visual microscopy, the stage is always horizontal. If the instrument is used for photomicrography and a vertical camera is employed, the stage is also horizontal. For use with a horizontal camera, the entire instrument is placed in a horizontal position, resting upon three bosses provided on the two arms and base. The mirror is moved aside to allow light to enter the condenser.

The rack and pinion adjustment is placed in a position away from the operator and carries both the binocular body and the fine adjustment. It is provided with wide bearings and is counter-balanced. The fine adjustment mechanism carries only the nosepiece and objectives. This insures the positive and responsive action necessary when working at high magnifications. This arrangement also relieves the adjustment of extra weight. It is of special value in photomicro-graphic work where it is necessary to make long exposures. The fine adjustment operating heads are extra long for convenience.

The instrument comes equipped with two different type body tubes: (A) the binocular type for visual use, and (B) the single tube for photomicrographic work. The binocular tube is inclined to a comfortable position, while the stage remains horizontal. Standard objectives corrected for 160 millimeter tube length are used with standard eyepieces at standard magnifications.

This microscope has a 150mm circular, revolving stage carrying mechanical movements in two directions. It is center able by the usual centering screws and has a clamp to arrest the centering adjustment when the stage has been brought to center. A special slide with cross lines in a circle aids in centering. The mechanical movements have forward and backward adjustments by rack and pinion, and transverse adjustment by multiple screw. These adjustments are so placed that they may both be operated from the right-hand side of the stage, and the stage may be completely rotated with the objective in focus without interference. Suitable scales are provided for all movements, including a graduated circumference for degrees of rotation. The transverse adjustment may be quickly removed if desired, to provide a large flat stage for dishes, plates, etc. A clamp is provided to arrest the backward and forward adjustment; another clamp arrests the rotation of the stage. It is, therefore, possible to fix the specimen firmly in position—a very desirable feature in photomicrography.

The substage is of the complete form, moved up and down by means of a geared rack and pinion adjustment, giving a slow motion for fine focusing of the condensers. A quick changing slide is provided for attaching condensers, dark ground illuminators or objectives — when used as condensers. This slide is centerable by means of two screws with extended heads. A graduated iris diaphragm, which is rotatable and decenterable, is provided so that oblique illumination of any degree and position may be obtained. The diaphragm can also be swung out of the optical axis to attach polarizer. A feature of the substage is a supplementary condenser on swing arm. The focus of this condenser is so selected that the field of a 16 or 32 millimeter objective may be entirely filled with light without moving the substage or any of its elements from the usual position for high power objectives. The advantage of this arrangement will be seen at once, especially when the condenser has been placed in immersion contact with the object slide and carefully focused for critical illumination. When the supplementary lens is placed in the optical axis below the condenser, the field may be searched with a low power and, when the object desired is found, the lens is swung aside. Both low and high powers function properly without readjustment of the condenser.

Only one mirror, the plano, is required. This is provided with clamping arrangement. An aluminized first surface mirror to secure a single reflection is available on special order. A suitable illuminator should always be used, especially in research work, in order that correct and uniform illumination be obtained. B&L has designed a research illuminator to be used with this microscope. 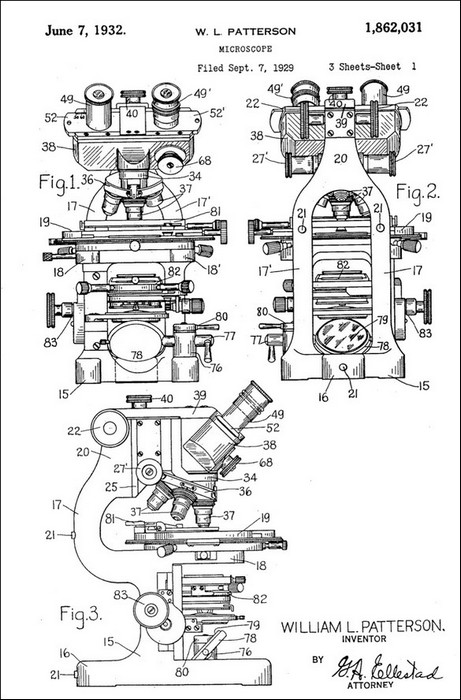 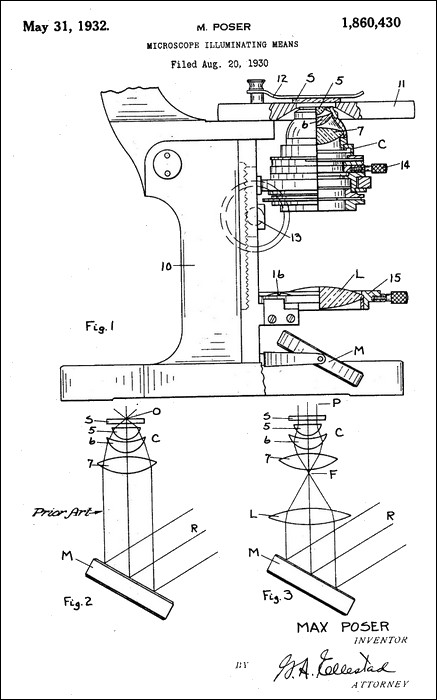 This microscope was formerly the property of Rockefeller University. It was purchased for this collection from a professor at the university who rescued it from the trash. He communicated to me what he knew about its history as follows:

Regarding the history of the instrument, I cannot give you anything solid, but there are some very interesting intersections. In 1990 (give or take a year) I was assigned new laboratory space at Rockefeller University. It was one half of the fourth floor of Founders Hall, a landmarked building completed in 1905. The building is steeped in history, with my fourth floor labs having a direct connection to a fifth floor 'add on' of rooms with skylights. These skylights provided the daylight for Dr. Alexis Carrel to operate. Carrel joined Rockefeller in 1906 and received the Nobel prize for surgery in 1912. My labs still had the dumbwaiter used to send up surgical supplies and still had the operating rooms, all painted black to allow detection of dust. These were the labs where Carrel collaborated with Charles Lindbergh to invent a perfusion pump. Unfortunately, both Carrel and Lindbergh were gone by 1939 when Carrel was forced to resign and joined a eugenics institute in France. His decidedly non-PC views did not make him a popular character at Rockefeller. Some speculated that Carrel influenced Lindbergh to take pro-Nazi views. When Carrel left, the labs then passed on to Frank Horsfall, a pioneer in virology, and then to his collaborator Igor Tamm. This pair was most famous for discovery of the "Tamm Horsfall protein" of urine which could inhibit some forms of viral replication. Tamm had just retired when I got the space, and he was a packrat, as attested to the freezers full of frozen urine he left behind for me to deal with. He was also a microscopist. He had a room dedicated to a matched pair of scopes in temperature control boxes for making time lapse movies of cells with one scope for the experimental conditions and the other for the control. I needed that room for other studies and the those time lapse instruments were put into storage and probably thrown away eventually. But the rest of the room was stocked with sundry optical equipment which I had to dispose of. I had arranged a large grant from Amgen which funded the complete renovation of the labs, and everything was cleared out. I took the Bausch and Lomb rather than throw it out. Given the serial number on the microscope which suggests it was made in 1941, it seems most likely that the microscope was first owned by Frank Horsfall and then by Igor Tamm, but I cannot point to a study or exact line of studies where it was used.

An article about the B & L DDE Research Microscope is online