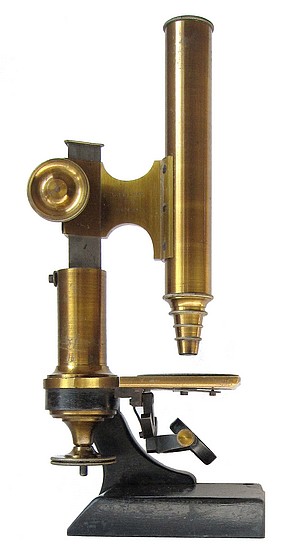 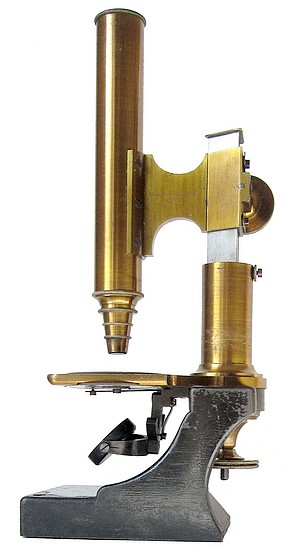 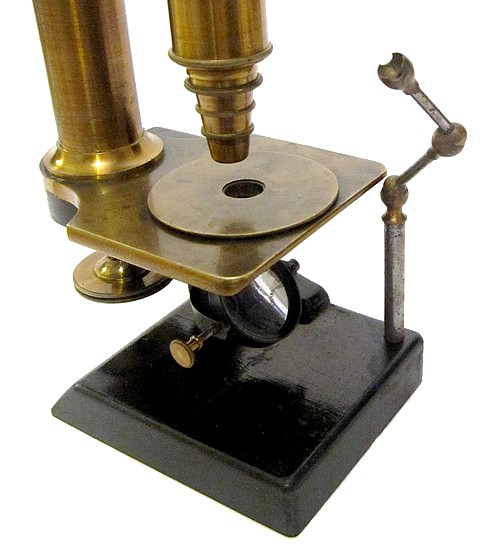 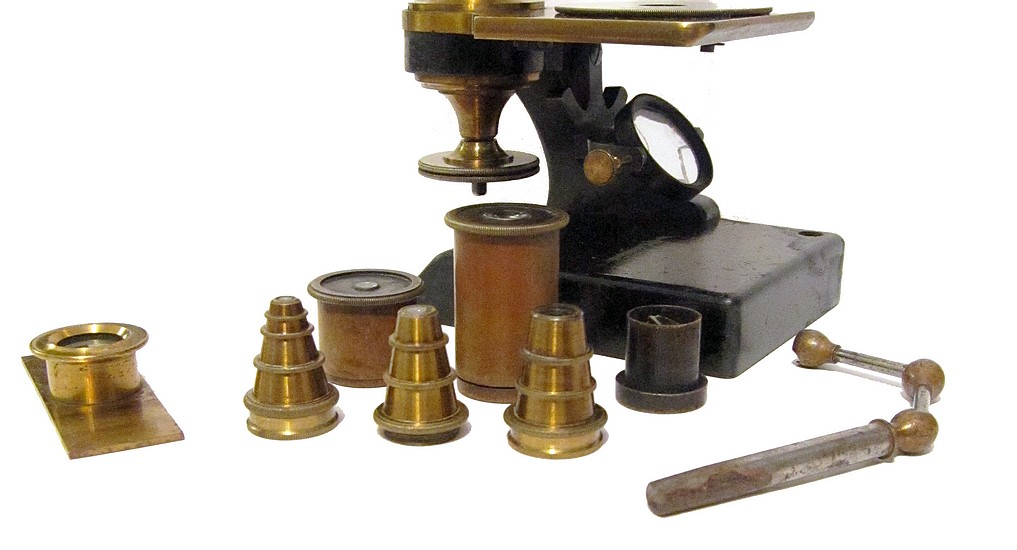 The microscope is equipped with eyepieces numbered I and II and the objectives numbered 1, 2, and 3 which are also signed Belthle & Rexroth. Note that there is an articulated arm with ball and socket joints that fits into a hole in the base which might have held a stage condenser (now missing) or something else? Also, there is a Nicol prism in a brass mount. The live box is based in the English pattern and may not have been originally purchased with the microscope. The upper round stage plate can rotate about the optical axis. Below the stage is a rotating diaphragm with 7 apertures. 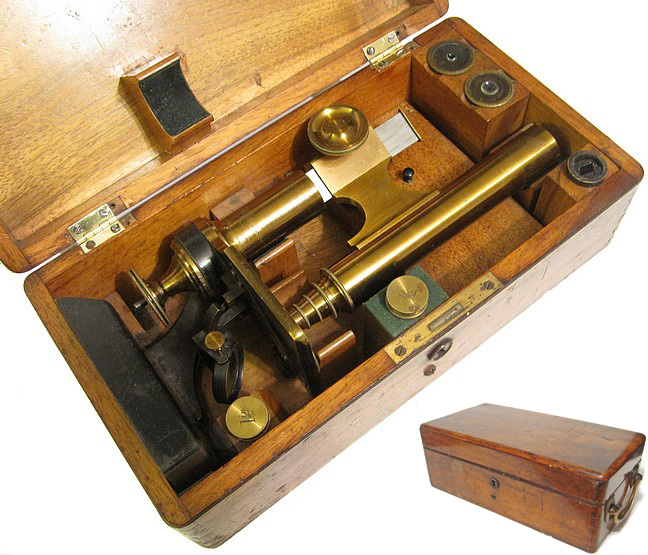 This is an example of the middle-sized model produced by the firm; see: C. Kellner in Wetzlar gegründeten Instituts Nachfolger: Belthle and Rexroth Price list for 1858 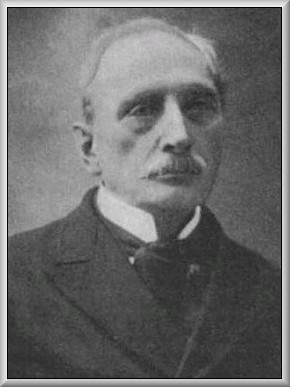 This microscope was purchased for this collection from a source located in the United States. A search of the production archives retained by Leica Microsystems GmbH of microscopes made in the early period of the Optical Institute in Wetzlar indicates that this Belthle & Rexroth microscope with serial number 280 was sold to Louis Bauer of the Brooklyn City on Febuary, 1859 ( an extract from the delivery book is reproduced here). Dr. Louis Bauer (1814-1898) has been referred to as "the father of orthopaedic surgery in the United States"

Louis Bauer was born in Stettin, the provincial capital of Pomerania. He received a good education and in 1833 he began his study of medicine at the Universities of Greifswald, Breslau, and Berlin. In 1838, he passed the state examinations and qualified as a physician, surgeon, and obstetrician. While he was engaging in a private practice and functioning as the district physician in Kreiss County, East Prussia, he was also active in politics. His participation in a democratic movement in opposition to the Crown resulted in a 10-week imprisonment in 1848. Because of this and likely facing additional imprisonment, he was forced to move his practice to England and in 1852 he became a member of the London Medical Society. However, a year later he emigrated to the United States and settled in New York, in a section then known as Brooklyn City.

There, along with a fellow German immigrant physician Gustav Braeunlich, he founded, in 1856, what was initially called the Brooklyn German General Dispensary. Within a short time, the name of the institution was changed to the Long Island College Hospital (today it is now known as the Downstate Medical Center); this was America's first college hospital.

Bauer held an appointment as Professor of Anatomy and Surgery at the hospital. In addition, he later was made Health Officer of Brooklyn City and served in that capacity for two years. He also served as the pathologist for the Brooklyn coroner and was a frequent lecturer at the Brooklyn Medical and Surgical Institute. During his 16 years in Brooklyn, Bauer wrote many articles and books among which was a work considered to be the first American textbook of orthopaedic surgery, Lectures on Orthopaedic Surgery, published in 1864 and a textbook of orthopaedic surgery in German, Handbuch der Orthopadischen Chirurgie, published in 1870. As a pathologist, he also showed an interest in the use of the microscope in medicine as evidenced by his 1859 publication of the English translation of Gustaf von Duben's Treatise on Microscopical Diagnosis. Interestingly, it was just at about that time that he came into possession of the Belthle and Rexroth microscope described herein. His accomplishments as an author, as well as his surgical skills and the treatments he pioneered for orthopedic diseases bought him renown within the profession.

In 1869, with the encouragement of some German residents of St. Louis, Bauer moved to that city. By 1878, Bauer chartered the St. Louis College of Physicians and Surgeons where he held the position of Professor of Surgery. He later became the dean of this institution, a position he held for 12 years. He continued to publish on orthopaedic and other medical subjects until his death on November, 5, 1898 at the age of 84. Today he is often referred to as "a pioneer in American orthopaedic surgery".

The professional life Louis Bauer is best summarized by this quote from the final paragraph of the Alferd R. Shands biographical article:

"He was a German born orthopaedic surgeon who lived in Brooklyn (1853-1869) and St. Louis (1869-1898); he was one of the chief founders of a medical school in each city; he wrote the first American orthopaedic textbook, which was a classic of its day; he founded in Brooklyn the second orthopaedic institution in the United States, which was the first in New York; he was a strong advocate of "rest-absolute and unconditional" for joint disease; he was spoken of by Sir Arthur Keith, as "the real founder of the American School of Orthopaedics"; he was greatly admired by Hugh Owen Thomas, who spoke of him as "the best exponent of American orthopaedics"; he was mentioned in the National Cyclopedia of American Biography in 1894 as being, "undoubtedly the father of orthopaedic surgery in the United States"; and he was a dynamic but controversial figure in American orthopedics for over forty years in the second half of the nineteenth century".

Some publications by Louis Bauer.

(I would like to thank Dr. Timo Mappes and Rolf Beck of Leica Microsystems GmbH for their help in obtaining information from the early archives of the firm; without their assistance, the association of this instrument with Dr. Bauer could not have been made.)

For more information about this microscope, related instruments, and the history of the Leitz firm, see the article:

Some Early Microscopes from the Optical Institute in Wetzlar