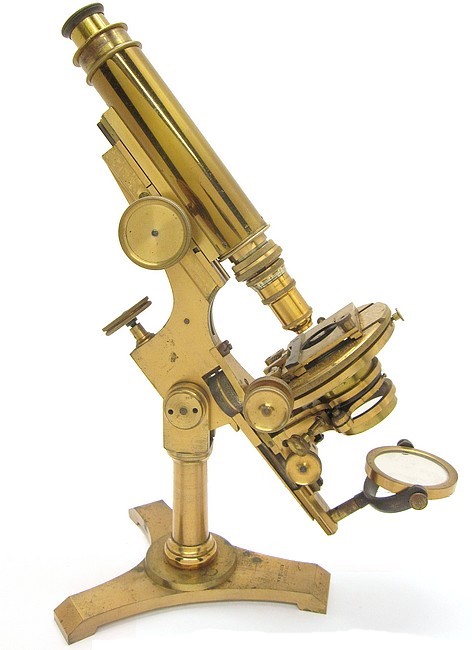 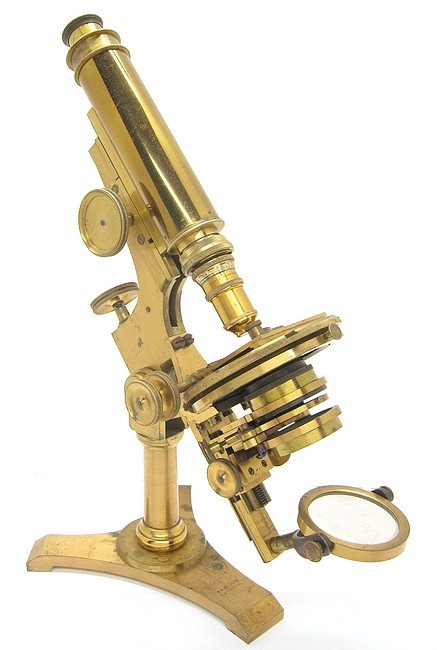 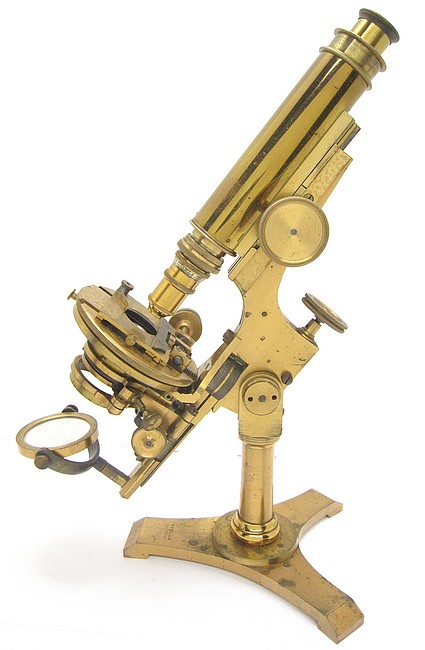 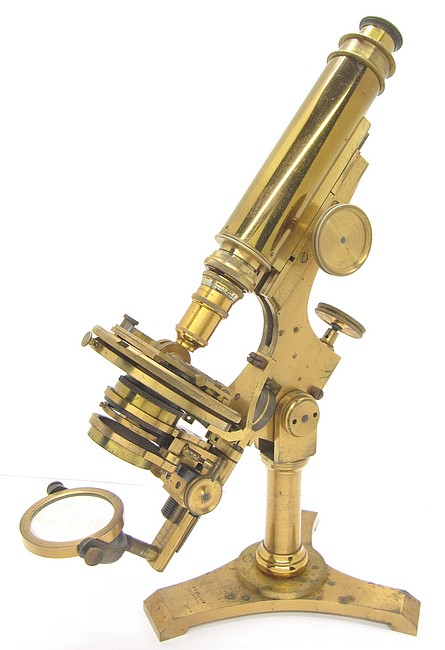 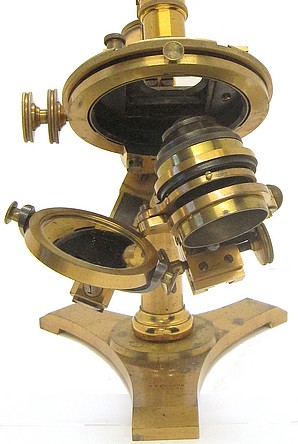 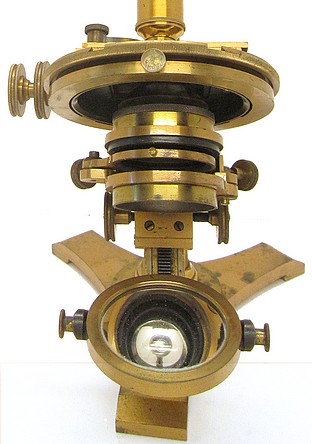 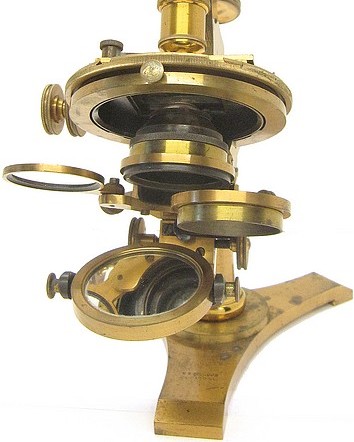 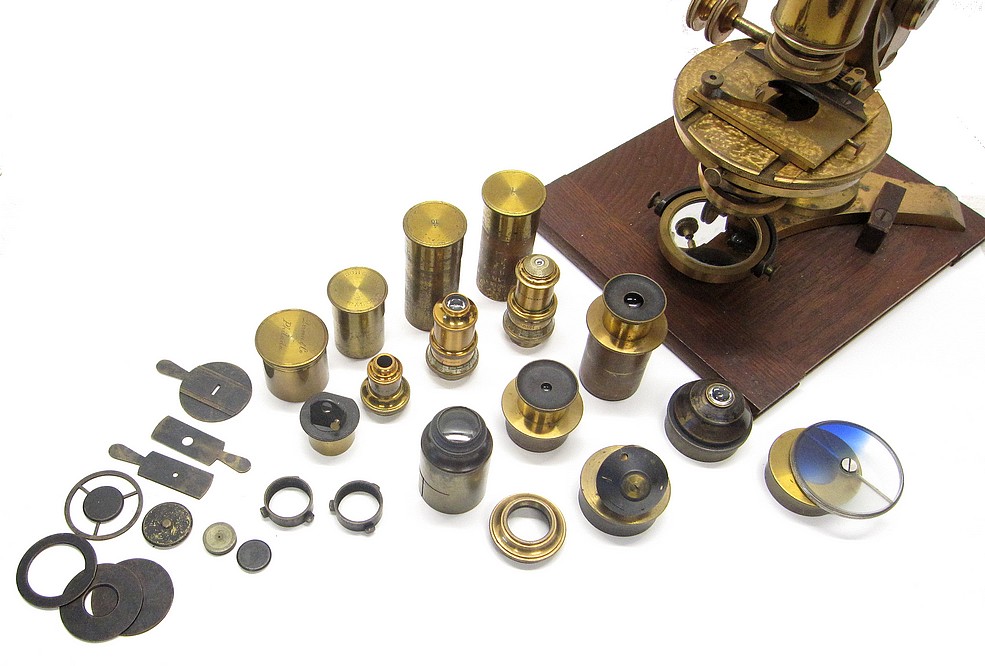 Among the accessories that survived with this microscope are three Bausch & Lomb objectives, a 1/6-inch immersion, a 4/10-inch (both with a correction collar), and a 1-inch, each with a canister. There are two eyepieces marked 6 and 12, an Abbe condenser, an elaborate set of stops that fit in a ring located under the condenser, a sub-stage tinted glass filter wheel, a camera lucida in a canister labeled Queen & Co., an erector that fits into the end of the draw-tube, a stage micrometer in a leather case, a sub-stage Gillet diaphragm, and a conventional nosepiece that can be removed and replaced with a safety nosepiece that also has Bulloch’s patented quick-change nosepiece attached. Accompanying the microscope is the original magnification chart.

The 1/6 immersion objective is marked Bausch & Lomb Opt. Co. and is also engraved with a name, possibly of the original owner of this microscope. The name appears to be H. A. Smith, although because of the difficulty in interpreting the Old English script, the identity of the two initials is uncertain. 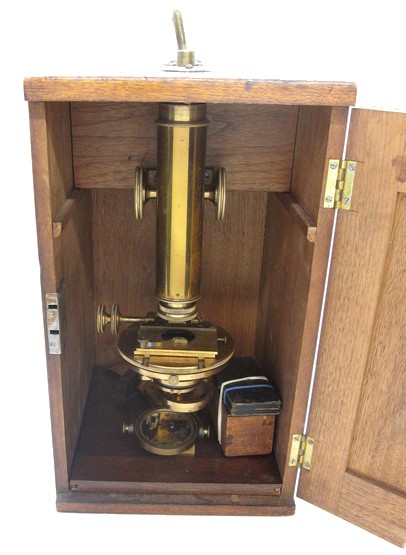 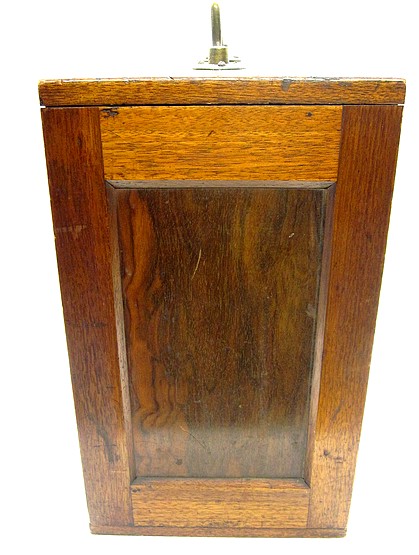 The following description of Biological Microscope No. 2 was extracted from the 1890 Bulloch catalog: 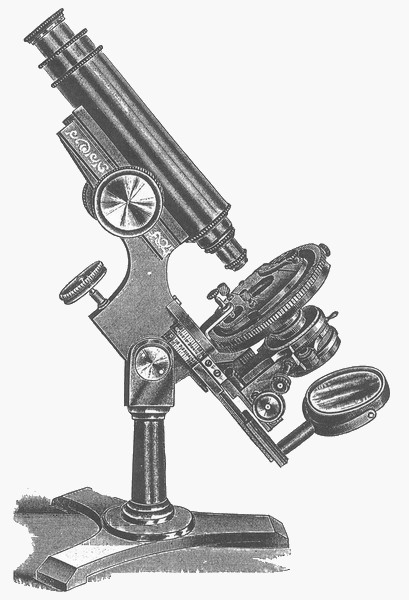 This stand has been expressly designed for the use of investigators who wish a well made, solid and compact instrument, which can be furnished with many accessories that are used on larger stands. The coarse adjustment is by rack and pinion, and is of sufficient range to admit of the use of very low-power objectives. The fine adjustment is by a lever, acted upon by a micrometer screw, which is graduated to 1/1000 inch, and has a double milled edge, between which a cord may be run for focusing when the microscope is used for photography. It has plain and concave mirrors, adjustable, on the bar. It has a revolving glass stage, with sliding object carrier under an ivory point. The instrument also revolves on the base, for convenience in photographing. The sub-stage has a rack and pinion, for focusing, and a newly arranged centering attachment, by micrometer screws. The mirror and sub-stage bars are separate, and move independent of one another. Both bars move freely in a circle around and above the stage. They are provided with graduated circles reading to degrees, and are arranged with spring stops, which act when they are in the optical axis. The sub-stage has another rotating attachment, for convenience of changing accessories. The sub-stage being made in two parts, similar to the Congress stand, the lower part, adapted to fit the polarizing prism, can be swung aside without disarranging the condenser. For the convenience of using diaphragms, or selenites, a frame swings between the two fittings. The instrument has the Butterfield broad gauge and society screw in the optical tube, and also has society screw adapters in the draw-tube and sub-stage. The length of the optical tube is 6 inches, and there is a marked ring on the draw-tube for the standard length of 9 inches. The instrument is of polished brass. 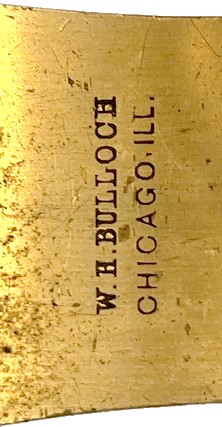 While the Bulloch signature is on the surface of the foot, it is marked on the underside of the foot with the serial number and patent date. As shown in the photos with the draw-tube closed, the microscope is about 15-inches in height. This microscope differs from the one described in the catalog entry in that it has a revolving Turrell-type mechanical stage where the inner knob operates a worm gear for the horizontal motion and the outer knob operates the vertical stage movement using a rack and pinion.

The unique features of this microscope are described in Bulloch's 1879 patent. The death of this. eminent Chicago microscope maker is a severe loss, not only to the Illinois State Society.of which lie was for nearly twenty years n prominent member, but to the cause of science at large. He was born in I835, at Glasgow. Scotland, and lived there until he was seventeen years of age. About 1852 the family emigrated to New York, where Walter learned the trade of tailor with his father. But his innate fondness for mechanical pursuits made him dissatisfied with his prospects, and he was apprenticed to Messrs. Pike & Sons, then a leading firm of opticians and instrument makers on Broadway. New York city. After serving his time he went into business until the war of the rebellion broke out, when he enlisted as a private in the 12th N. Y. volunteers. His term of service, however, was very short, as he contracted a severe cold, which developed into rheumatism, and he was incapacitated from further work, and was mustered out of service. Returning to New York he formed a partnership with William Wales, the well-known maker of objectives, and continued in business there until 1866, when he moved to Chicago. He was very successful and had accumulated considerable means, when his shop and tools were destroyed in the memorable Chicago fire of Oct. 8 and 9, 1871. And Mr. Bulloch sustained a financial loss from which he never recovered. Immediately after this misfortune, he went to Boston and was for a time connected with the late R. B. Tolles, but again returned to establish himself in Chicago. In 1889 he accepted a position connected with the U.S. Coast and Geodetic Survey in the Bureau of Weights and Measures, at Washington, but he chafed under the restraints of an official situation, and after six months experience, returned to his home here. Before he left his health had begun to fail, and after his return late in the fall of 1890 he suffered still more. But his indomitable perseverance led him to struggle on. He opened a place at No. 303 Dearborn street, in a very advantageous business portion of the city, and began work again. It was not for long. After struggling with disease for about six months he was compelled to stop forever. He died Nov. 5. 1891. at Elgin IllL., where he had gone for treatment by Dr. IP. Tyrrell. He leaves a wife but no children.

As of 2014, the highest known serial number for a Bulloch microscope was 675 suggesting that his output was much less than that for many other contemporary makers.