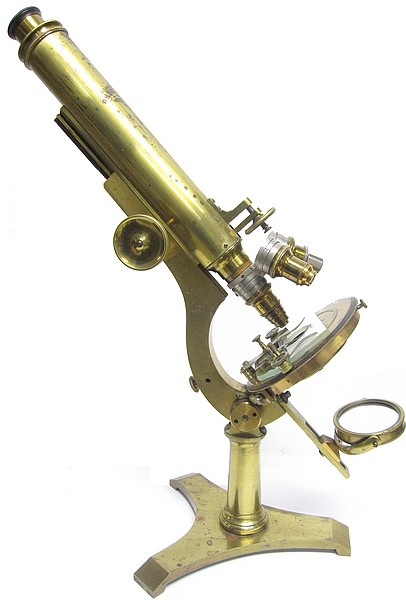 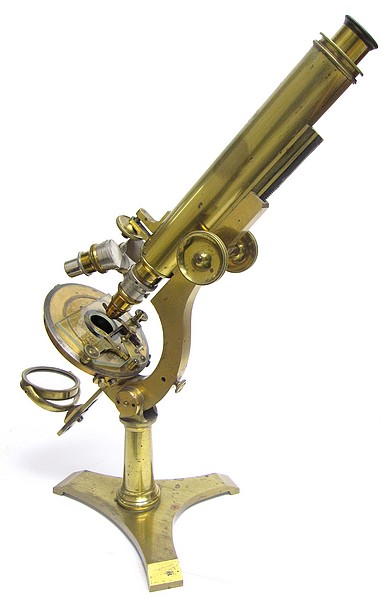 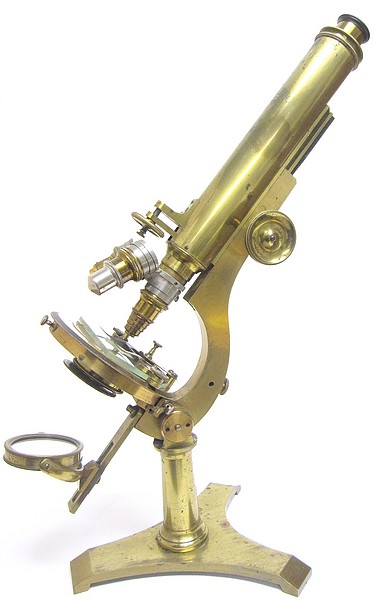 The microscope came supplied with the original Gundlach 3/4 and 1/5 objectives, two eyepieces, glass and brass slide carrier, and aperture wheel. The owner later added a Bausch & Lomb 1/12 oil immersion objective, an Abbe condenser, and a B&L triple objective changer. The microscope has its wood (walnut?) storage case having an internal drawer for the accessories. 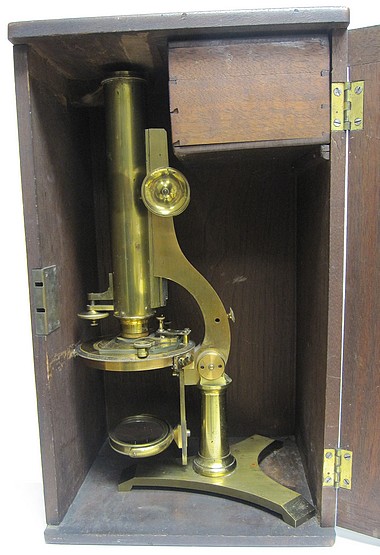 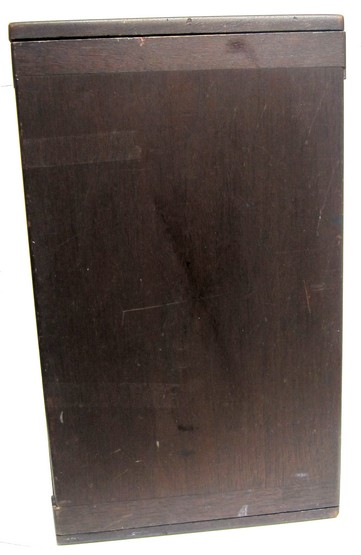 On the back of this receipt, Bulloch added a guarantee that he would exchange this microscope and apply the price to an upgrade to a better instrument should the owner decide to do so.

The following was extracted from the 1878 Bulloch catalog: 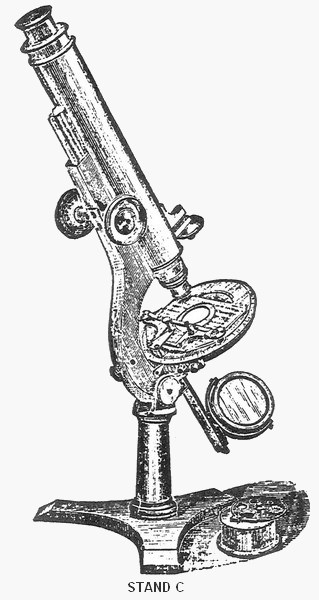 16 inches High when arranged for use; rack and pinion for the coarse movement; delicate screw for fine adjustment; has the concentric adjustable stage; can be centered to any objective; the edge of stage is beveled and graduated with a complete revolution, so that the angle of crystals can be measured; glass stage perforated in the center, brass fittings so that the Maltwood finder can be used; it has perfectly smooth motion under the highest power; to the under side of stage is fitted tube for accessories, but can be removed, so that the utmost angle of oblique light can be obtained. A plain and concave mirror; lateral motions for oblique light; diaphragm; graduated draw tube, with tube inserted with society screw, so that amplifier, &c., can be used above the objective. The Instrument is mounted on single column tripod base.

Obituary of Walter H. Bulloch (1835-1891) as published in the American Monthly Microscopical Journal, 1892

The death of this eminent Chicago microscope maker is a severe loss, not only to the Illinois State Society.of which lie was for nearly twenty years n prominent member, but to the cause of science at large. He was born in I835, at Glasgow. Scotland, and lived there until he was seventeen years of age. About 1852 the family emigrated to New York, where Walter learned the trade of tailor with his father. But his innate fondness for mechanical pursuits made him dissatisfied with his prospects, and he was apprenticed to Messrs. Pike & Sons, then a leading firm of opticians and instrument makers on Broadway. New York city. After serving his time he went into business until the war of the rebellion broke out, when he enlisted as a private in the 12th N. Y. volunteers. His term of service, however, was very short, as he contracted a severe cold, which developed into rheumatism, and he was incapacitated from further work, and was mustered out of service. Returning to New York he formed a partnership with William Wales, the well-known maker of objectives, and continued in business there until 1866, when he moved to Chicago. He was very successful and had accumulated considerable means, when his shop and tools were destroyed in the memorable Chicago fire of Oct. 8 and 9, 1871. And Mr. Bulloch sustained a financial loss from which he never recovered. Immediately after this misfortune, he went to Boston and was for a time connected with the late R. B. Tolles, but again returned to establish himself in Chicago. In 1889 he accepted a position connected with the U.S. Coast and Geodetic Survey in the Bureau of Weights and Measures, at Washington, but he chafed under the restraints of an official situation, and after six months experience, returned to his home here. Before he left his health had begun to fail, and after his return late in the fall of 1890, he suffered still more. But his indomitable perseverance led him to struggle on. He opened a place at No. 303 Dearborn street, in a very advantageous business portion of the city, and began work again. It was not for long. After struggling with disease for about six months he was compelled to stop forever. He died Nov. 5. 1891. at Elgin ILL., where he had gone for treatment by Dr. IP. Tyrrell. He leaves a wife but no children.

As of 2014, the highest known serial number for a Bulloch microscope was 675 suggesting that his output was much less than that of many other contemporary makers. At about the time this microscope was offered by Bulloch, several other very similar models were being sold in America, among which were the Zentmayer United States Army Hospital Model, the Queen Student Model, and the Beck National Model.

This microscope was purchased for this collection from a descendant of the original owner, Dr. Thomas Noonan Miller M.D. (1849-1930). The receipt, dated Oct. 16, 1877 (note that the last digit on the date was a printed "6", but was written over with a "7"), indicates it was sold directly to him. What follows is the content of a note that his great-granddaughter sent along with the microscope:

"Thomas Noonan Miller was born August 24, 1849, in Oneida County, New York. He died on January 14, 1930, age 81, of pneumonia, sitting in his chair at 1304 W. State Street, Rockford, Illinois. His wife, Arvilla Augusta Lane Miller, had hired a nurse to take care of him, but he wouldn't go to bed - said "pneumonia was an old man's friend."

Thomas Miller graduated from Beloit College in Wisconsin with a B.A. degree in 1872. He received his M.D. degree from Chicago Medical College (later Northwestern University Medical School) in 1880. It was unusual for a physician to have a college degree before attending medical school or being apprenticed to a practicing physician. He was a great reader and always had a library card. He walked or rode his bike to the library from his home at 1304 W. State St. in Rockford.

From the family archives of his descendants.