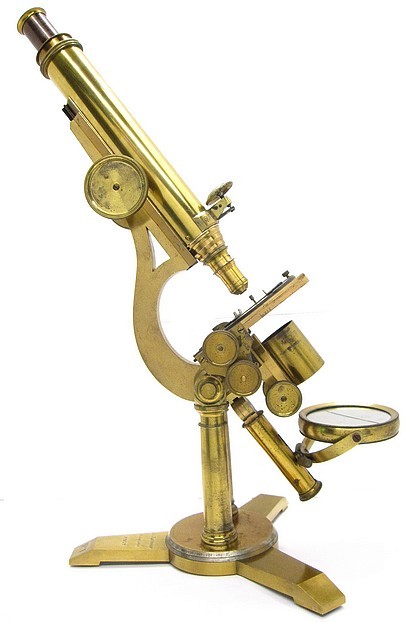 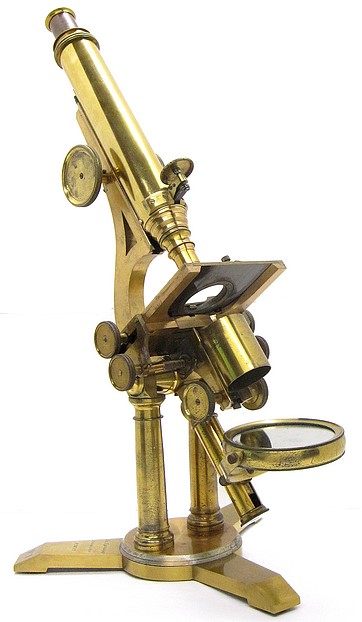 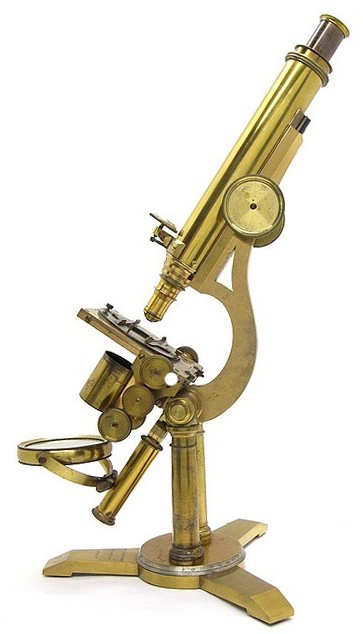 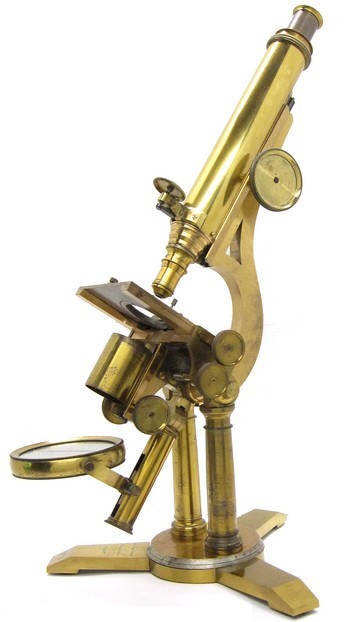 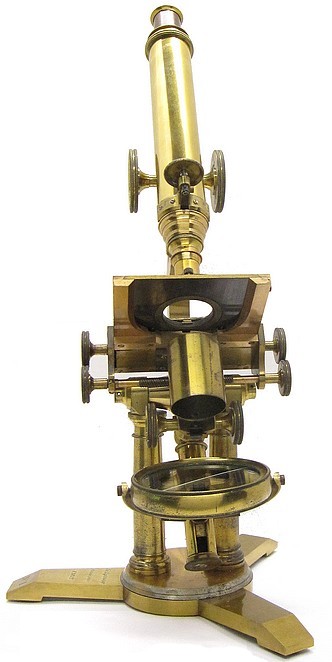 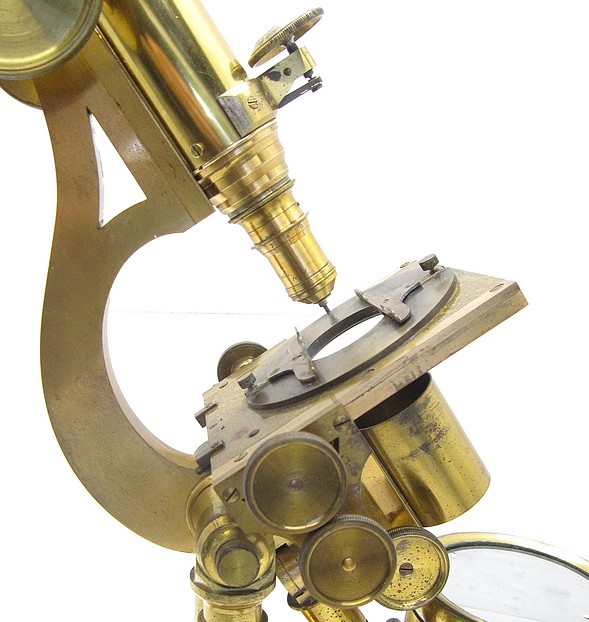 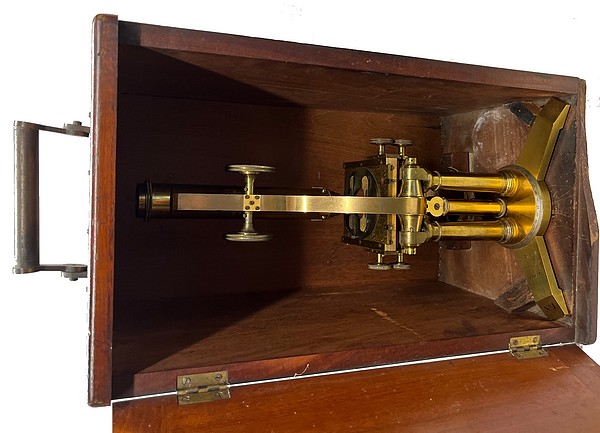 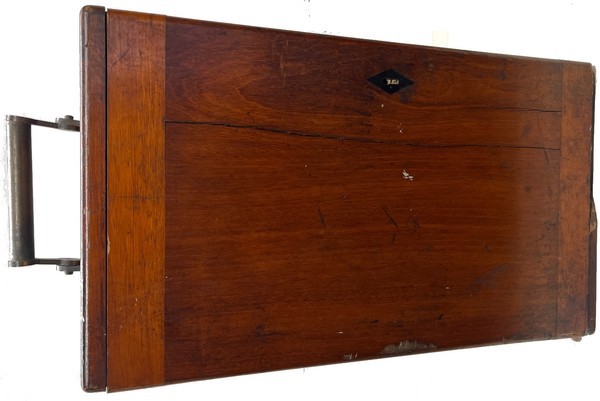 On the basis of the engraved serial number, No.1, this microscope is likely the first example (or the forerunner) of Zentmayer's Grand American model that was made in 1858. In addition, it is also likely that this was the very first large microscope that Zentmayer produced. See the article written by Zentmayer entitled "What I Know About Late Improvements of the Microscope", published in the Journal of the Franklin Institute, LXXXIV, 1877, where he describes some of the history of this model. Also, note the information quoted from the literature references given below, where the identity of the original owners of this microscope is discussed.


With respect to the stage, this microscope differs in several ways from the later standard version of the Grand American that is described in the catalog extract below . With the standard version, the revolving object carrier on the stage has a beveled edge that is calibrated in degrees, while the earlier microscope shown here has no calibrations. The standard version has a Turrell-type mechanical stage where the outer knob operates a worm gear for the horizontal motion and the inner knob operates the vertical stage movement using a single fusee chain. With the microscope shown on this page, there are two separate control knobs located one above the other, with the lower one using a worm gear for the horizontal motion and the upper knob for the vertical movement utilizing two fusee chains located on either side of the stage. These control knobs are duplicated on both sides of the stage. With the later standard version, there are graduations for the rectangular movements of the stage; these are absent on the microscope shown here.


This microscope was found with its mahogany storage case, the stand for a bulls-eye condenser (lacking the lens), and one eyepiece. The case doesn't seem to have ever had fittings for other accessories suggesting that Zentmayer may not have made any for this first microscope. It now has a replacement objective lens made by W. Wales.

Joseph Zentmayer was a German immigrant who arrived in America in 1848 at age 24. He worked as an instrument maker with various firms in Germany and then in the Northeast USA until he went out on his own in Philadelphia in 1853. The Grand American was the top-of-the-line model produced by Zentmayer from 1858 up to 1876, when production of this model ceased and was replaced by the American Centennial model microscope. Elsewhere on this website is an additional example of a monocular Grand American with serial number 14, a binocular/monocular version with serial number 1089, and another binocular model with serial number 330.

The following is a catalog description of the later standard version of this model: 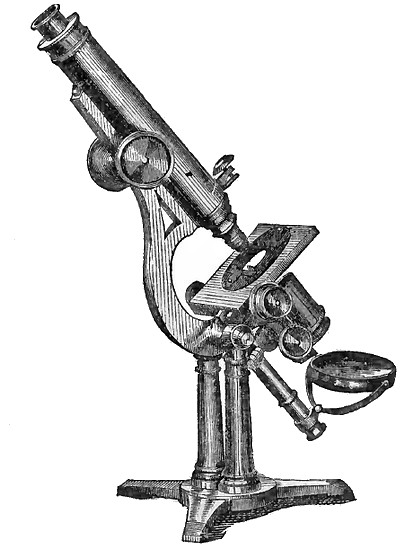 Is eighteen inches high when arranged for use. The instrument is mounted on a broad tripod with revolving platform, beveled, silvered, and graduated in degrees for measuring the angular aperture of Achromatic Objectives. Upon this platform two pillars are planted, which carry the curved bell-metal bar to which the body of the instrument, the stage, the secondary body, and mirrors are attached. The bar supports almost the entire length of the body, giving great steadiness and freedom from tremor. The movement of the body it effected by rack and pinion, connected with two large milled heads, which form the coarse adjustment. It has a graduated draw-tube to receive the eye-piece, erector, and analyzer. A fine micrometer screw with graduated and silvered head, acting on a lever, forms the delicate fine adjustment. Below the stage is the secondary body, a short tube, perfectly centrical to the main body, and moved by rack and pinion, to receive accessories.

The large plane and concave mirrors are so attached as to facilitate oblique illumination and to swing in one plane to the optical axis of the instrument. To ensure smoothness and durability in the movements, the touching parts are of different metals; one being always of hammered brass, the other of bell metal. The stage is firm, broad, and steady, and only 3/16 inch thick, giving great facility for extreme oblique illumination. It has rectangular movements of one inch in both direction, operated by milled heads that work upon the same axis, with an additional one on the other side of the stage (not visible in the cut), by which diagonal movements are obtained. Upon the square stage a revolving object-carrier is placed. The beveled and silvered edge of the revolving plate is graduated into degrees, and serves as a goniometer, Graduation are also connected with the rectangular movements of the stage, to indicate the position of an object in view so that, when once recorded, it can be easily refound.

It is worth speculating about who might have been the early owners of this microscope. Some relevant information can be found in the literature where there are suggestions that this microscope was once the property of Dr. Paul Beck Goddard (1811-1866) and that it was subsequently owned by Dr. Edward Robinson Squibb (1819-1900).

While there is no literature reference that specifically states that the Zentmayer microscope made for Dr. Goddard was marked with serial No.1, it is conceivable that it was on the basis, as stated in Frey and elsewhere, that the Goddard microscope was the first large microscope Zentmayer made and that it was "almost identical with the present Grand American Stand". This suggests that the microscope shown on this page, having serial No.1, was likely the one made in 1858 for Dr. Paul Beck Goddard and owned, subsequently, by Dr. Edward Robinson Squibb. 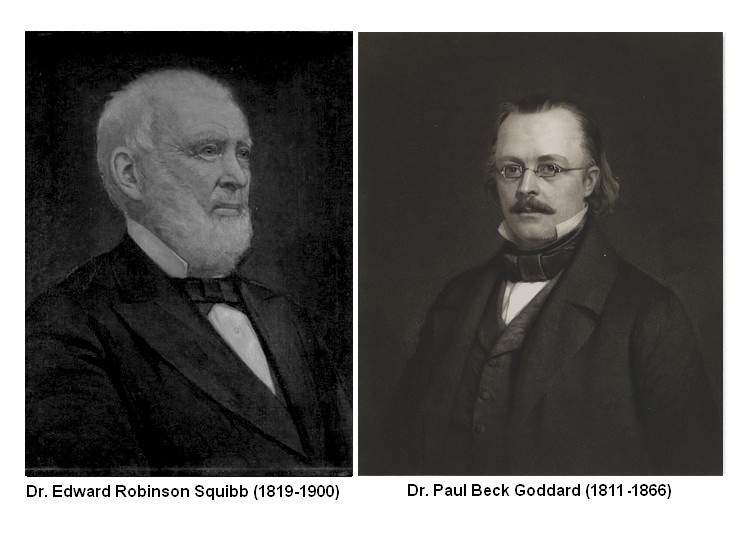