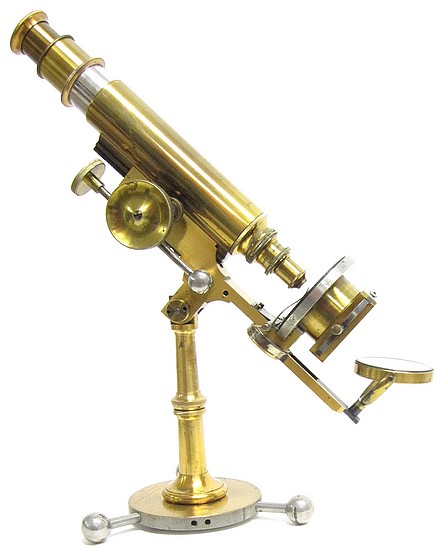 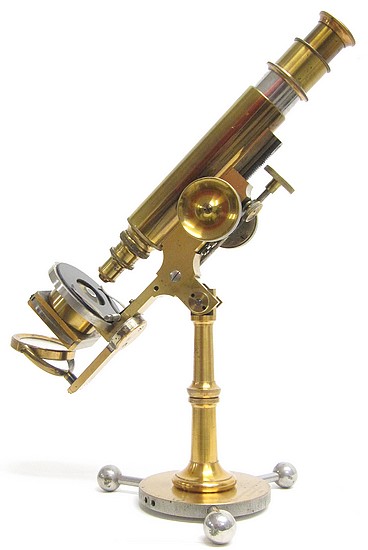 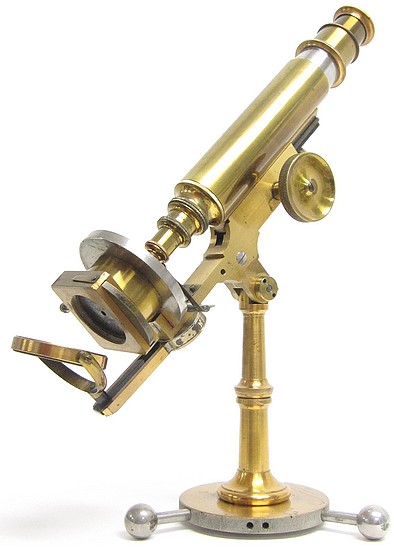 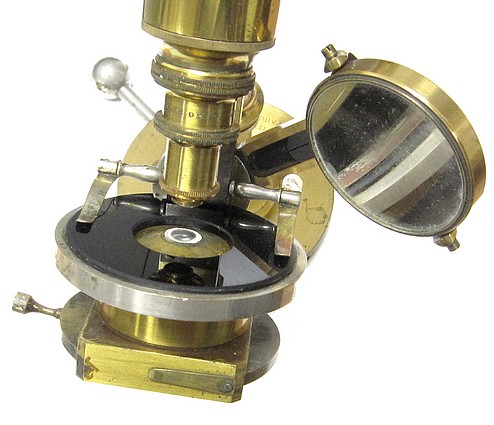 Microscope arranged for above stage illumination 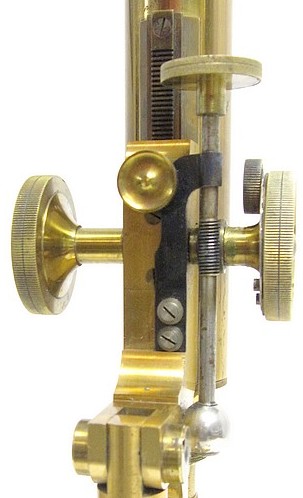 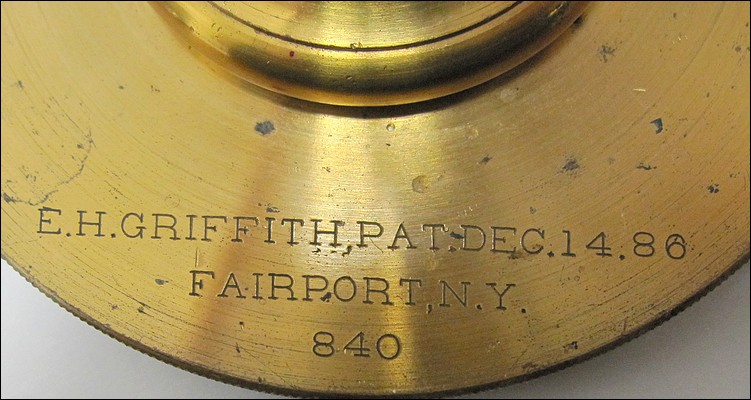 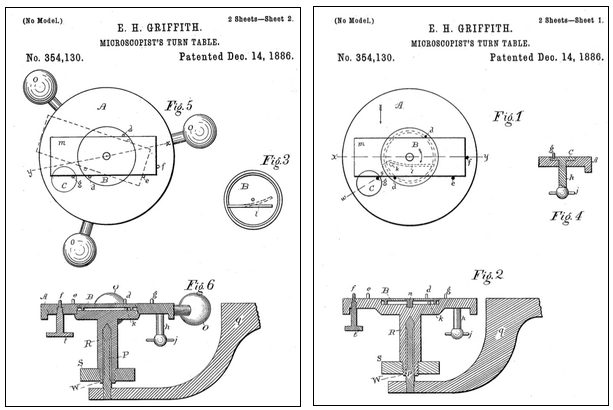 The Dec. 14, 1886 patent granted to Ezra H. Griffith concerns the removable base of this microscope which can serve as a self-centering turn-table for ringing the cover-glass in the preparation of a microscope slide.

Extracted from The Journal of the Royal Microscopical Society, 1883

Improved Griffith Club Microscope: (Proc. Amer. Soc. Micr., 5th Annual Sleeting, 1882, pp. 149-52, Ser. 2, Vol. III). The original "Griffith Club Microscope" was described in Vol. I. (1881) p. 293. Since that time important changes have been made by Mr. E. H. Griffith, so that very little of the original form is left, as will be seen on comparing figs. 8 and 9 with the earlier illustrations. It retains its original 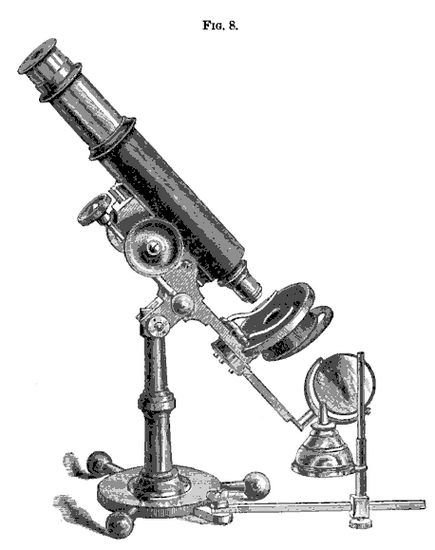 name in appreciation of the honour conferred on the inventor by the " Griffith" Clubs of Detroit and Danville, U.S.A. It is a full-sized instrument and the main and draw tubes have the Society screw. The coarse adjustment is effected by rack and pinion on the "Jackson" principle, and has about 3 in. of motion. The fine adjustment, which appears to be both simple and efficient, is effected 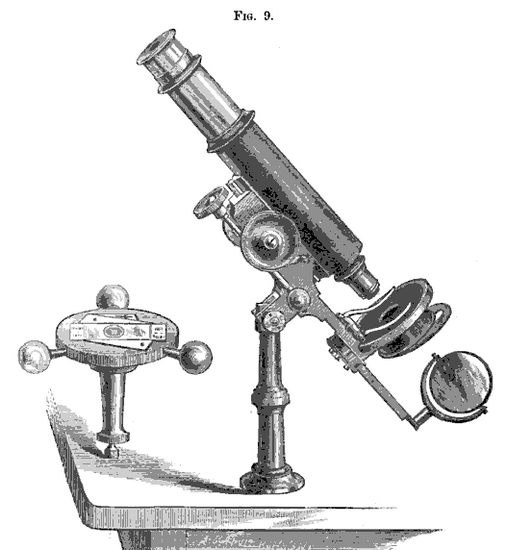 by the application of a worm-wheel and tangent-screw to the axis of the pinion of the coarse adjustment. The worm-wheel is on this axis, near the limb, and it is acted upon by the tangent-screw being sprung against it, the milled head of which is shown behind the limb in fig. 8. When the coarse adjustment is in use, a " snail "-shaped lever on the right of the limb (handle shown beneath the large milled head) forces the tangent-screw from contact with the worm-wheel, a spring latchet locking it in position (for the example represented in this collection, a different mechanism is used to engage the fine adjustment (see below)). By releasing the " snail" lever the tangent-screw is pressed into the worm-wheel, and acts upon the coarse adjustment so slowly that objectives of high power can be focused with it. It will of course be understood that when the tangent-screw is sprung against the worm-wheel the coarse adjustment is no longer operative, which Mr. Griffith considers to be a protection against breakage of slides. A similar system of fine focusing was adopted in England many years ago, and is still used in some of Plossl's models. The stage clips are supported on a bar above the stage, allowing the slide to make almost a complete revolution. The mirror-bar is adjustable in length, and the mirror can be set at any angle above or below the stage, allowing any obliquity of illumination for opaque and for transparent objects. The standard divides midway between the body and the foot, and the base may be detached, and the body set on an extra standard (fig. 9), with a screw at the end for fixing it in a tree, laboratory table, &c. The base being inverted and placed on a spindle, which is always in position in the box, becomes a turntable, provided with self-adjusting clips for holding the slide. Three rods, with silvered balls at one end, are the supports for the Microscope, and they give momentum to the turntable when in use. Two small holes in the edge of the turntable foot allow the attachment of an adjustable lamp-holder, which is furnished with a lamp for class, lecture, and exhibition use. A case about 7 in. long, 5 in. wide, and 3 in. deep, internal measure, holds the instrument when packed (fig. 10), and it may be taken down and packed for travelling or be taken from the box and set up ready for use in a few seconds, " making the Microscope not only a first-class monocular for home and office use, but also for the tourist and the naturalist." The Bausch and Lomb Optical Company are the makers. 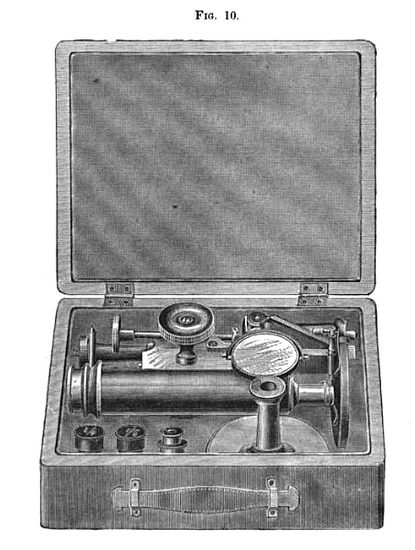 The microscope stores disassembled within its leather covered wood case having a red felt lining. Unfortunately, the microscope represented herein was obtained without its case. Instead, it was stored over the years on an oval wood platform with a glass dome covering. While the glass dome has not survived, the platform has. 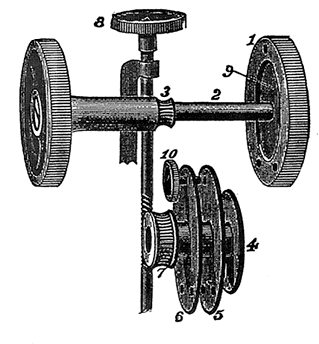 The method of engaging fine adjustment mechanism used on this example and illustrated above is different than the more simple mechanism described in the above extract from the JRMS. This newer mechanism allows the fine and coarse to be engaged simultaneously by proper adjustment of the small milled knob (labeled 10) which presses on a leather washer. 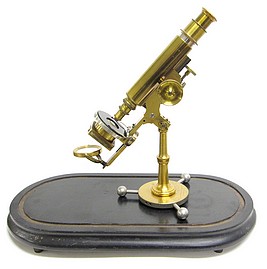 Bausch and Lomb Condenser and Substage. —This (fig. 219) consists of a condenser and substage, the latter having five stops, diaphragms and blue glass. The lenses of the condenser are of such a size os to utilize almost all the rays of light which may pass through the substage ring. ln order that objectives having a large aperture may be used, the condenser has been made with a numerical aperture of about 1.42 (another of 1.20 is also manufactured). Its volume of light is sufficient with the highest amplification, and although it gives an intense light at the focal point it may be distributed over a large space by varying its distance from the object. It will work both dry and immersion. The mounting of this condenser is new and simple, and is so arranged that the instrument can be used where the substage is adjustable or fixed. The diaphragms are separate.

Dr. George Minges was a physician and surgeon located at 989 Clay street, Dubuque Iowa. He was a native of that city and was born on July 8, 1855. He attended school in Dubuque and continued his education in Europe, mostly in Vienna. He studied medicine and graduated from the Bellevue Medical College in New York in 1878. He then completed his medical education in Europe after which, he began the practice of his profession in Dubuque in September, 1879. He was a member and president of the Dubuque Medical Society. He died in 1926 at age 71 from tuberculosis, which is ironic given that he published in 1905 a twelve page pamplet entitled "The Spread and Prevention of Tuberculosis." See the obituary Dr. George Minges.

A Case of Delivery of Brow Presentation, The American Journal of Obstetrics and Diseases of Women and Children, 18, 1135,1885

Primary Malignant Disease of the Kidney, Journal of the American Medical Association, 4, 650, 1885