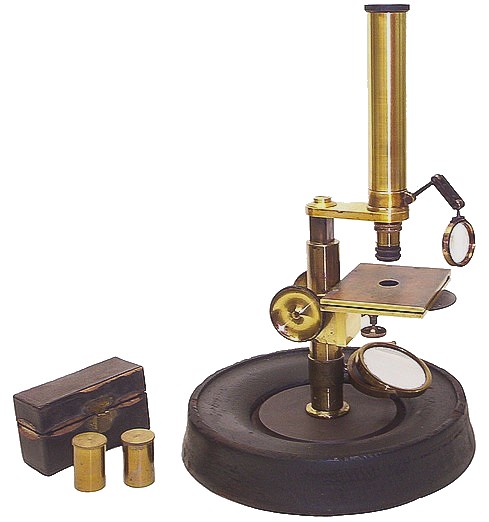 The fine adjustment knob is located under the stage. It works by tilting the upper stage plate. The microscope came supplied with two objectives with canisters that are stored in a small leather covered box and an adjustable stage condenser. Under the stage is an aperture wheel. The mirror is single sided and concave. 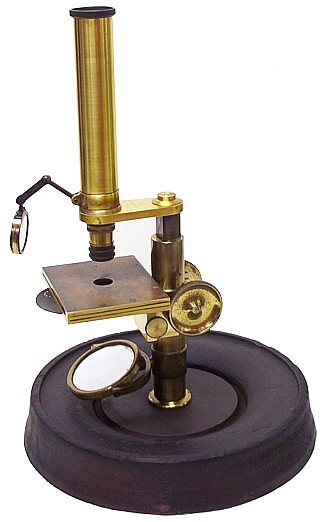 While this American-made microscope mounts on a round iron and wood base which was made for it, it is possible, given its small size and the fact that the stage is removable, that it was originally case-mounted and served as a field microscope. This is the only example of this model that I have seen. 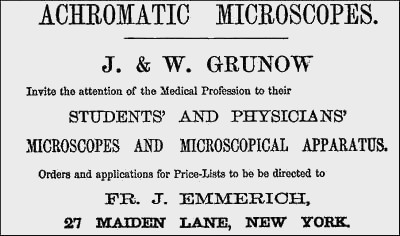 This advertisement appeared in the Army Surgeon's Manual for use of Medical Officers, Cadets, Chaplains, and Hospital Stewards by William Grace published in 1864. 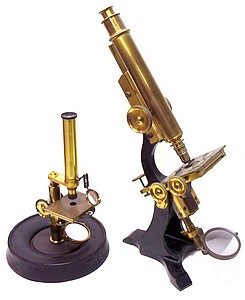 This microscope dates from around early 1860's and is therefore of Civil War vintage. The Grunow brothers, Julius and William, emigrated from Germany to New York around 1849. They started in the scientific instrument business by first working for the optician Benjamin Pike of that city. By 1854, they began their own operation in New Haven CT where they concentrated on the production of microscopes. By 1864, they were back in New York. Some years later, the partnership ended. J. Grunow continued on to produce microscopes up to around 1892. The total output of the Grunows was limited in comparison to some other contemporary firms; on the basis of the observed serial numbers, they manufactured just over one thousand microscopes in total.

A family history of the Grunows in 19th century America written by a descendant. 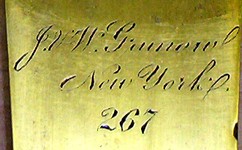