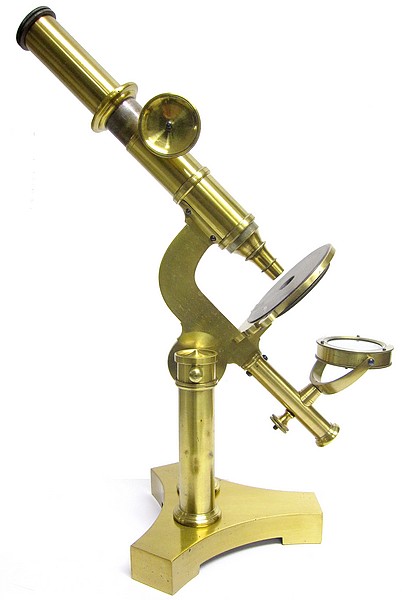 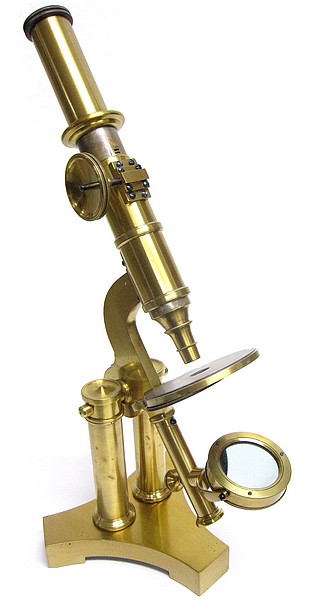 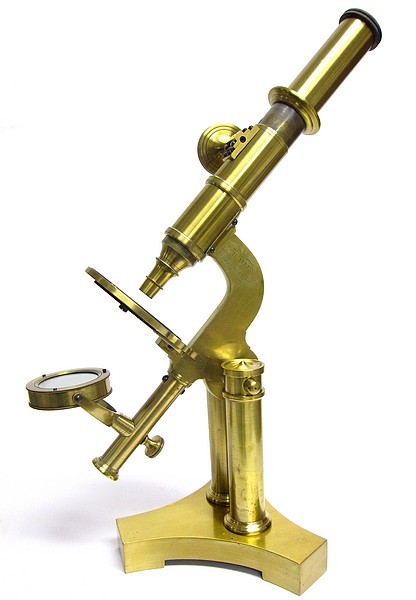 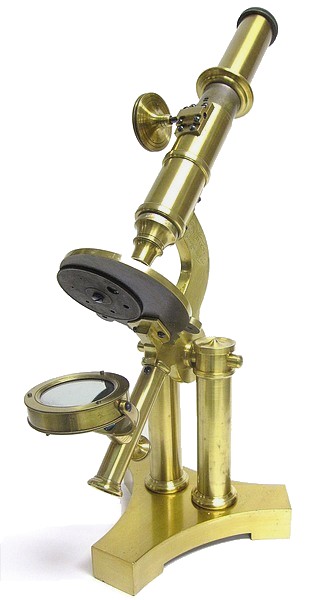 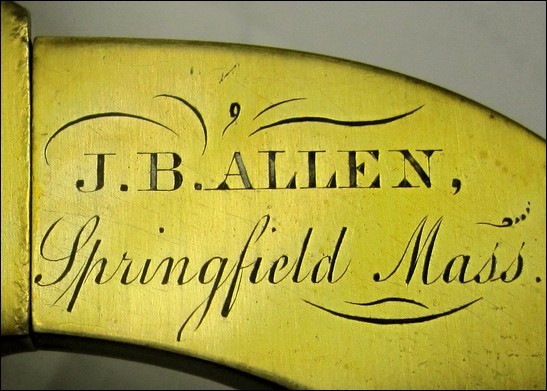 This unusual microscope was made by Josiah Bennett Allen (1813-1870) of Springfield MA, one of America's earliest manufacturers of microscopes. It is constructed entirely in brass and measures almost 16-inches tall inclined as shown in the photos. Focusing is by rack and pinion; there is no fine adjustment. When purchased for this collection, the microscope was missing all of its original surface finish and was in disrepair. It has now been professionally restored.

Allen was a talented individual who not only constructed optical instruments (microscopes and telescopes), but also string instruments (for example, see this). Microscopes by J. B. Allen are apparently quite rare. In 2009, two articles were written on the subject of Allen's microscopes (see the references below). At that time, only four Allen microscopes were known. Each of these microscopes, including the one described on this page, have a different unique design. The one located in the Harvard collection is the most similar to the one described here. The major difference being that the body is supported by two flat plates instead of the two cylindrical pillars supporting the body in the present microscope. Another microscope made by Allen sold at auction several years ago and is one of the previously known four.

While the exact date of manufacture of the instrument shown on this page is not certain, it is believed to date from the late 1850s. Unlike this microscope, two of the later surviving Allen microscopes from the mid-1860s have their dates of manufacture engraved under the signatures.

The following article was extracted from The Annual of Scientific Discovery or Year-book of Fact in Science and Art, 1850:

"AMERICAN MICROSCOPES: Mr. Spencer, of Western New York, has hitherto been almost the only person in this country who has turned his attention to the manufacture of microscopes, and he has succeeded in producing some instruments of great power and excellence. Most of those, however, at present in use in this country are of foreign construction. About a year since, Mr. J. B. Allen, of Springfield, Mass, having had his attention called to the subject of microscopes,with true Yankee perseverance and ingenuity, set about the construction of one of these instruments. Although he had never seen but one microscope, and that only for a few minutes, and had never seen a piece of glass ground, he devised his own tools and processes, and in the course of a few months produced an instrument, which he exhibited to the American Association, at Cambridge, in September. The power of this instrument was about 1,300, and it received the most unqualified commendation of the distinguished men there assembled. Professor Agassiz, after a careful examination of it, made a report, in which he spoke in the highest terms of its excellence. This instrument was purchased by Amos Lawrence, Esq., of Boston, who liberally presented it to the academy at Groton, Mass. By the advice of Professor Agassiz, Mr. Allen immediately commenced the construction of another microscope, with some improvements suggested by Professor A. This new instrument he completed in about three months. It was submitted to the inspection of Professor Wyman, of Harvard University, who carefully compared it with a similar microscope manufactured by the celebrated Oberhauser, and by him exhibited as one of his best instruments. The American specimen was found to be fully equal, if not superior, to the European, and there can be no doubt that it is the most excellent microscope ever produced in this country."

In an article in The Boston Medical and Surgical Journal of 1849, there was mention of some local individuals who were accomplished in the field of optics. One was Alvin Clarke, known for his telescopes, and the other was Josiah Bennett Allen. The following was written about the latter:

"The other, equally deserving for his moral qualities, mechanical ingenuity and profound knowledge in the same field of science, is J. B. Allen, of Springfield, a modest, retiring, deserving individual, who, as in the other case, without a patron, without an instructor, and almost without the approving recognition of those who are reputed to be wise above the multitude, has few equals in the domain of optics. He, too, has fabricated excellent reflecting telescopes—and it would be an honor to the great town of Springfield to purchase one of them for the use of the public schools, as the period may come when it will be a boast that Mr. Allen resided there. At the late session of the American Association for the Advancement of Science, at Cambridge, Mr. Allen exhibited a microscope which he had made. If we are not misinformed, he had never seen one himself before. It was admired for its wonderfully defining powers, and is enough to give him a permanent reputation. Amos Lawrence, Esq., of. Boston, celebrated for acts of generosity and encouragement, purchased it at once, and Mr. Allen was elected a member."

The following was writen in the book The Microscopic Anatomy of the Human Body by A. H. Hassall, 1851:

"Mr. J. B. Allen, of Springfield, Mass., has constructed several microscopes which are said to have been very good instruments, both as to model and object-glasses. The form is somewhat after the Pritchard model, in which the body inclines to any angle: the object-glasses yet made have been chiefly of low and medium powers, and have performed very satisfactorily"".