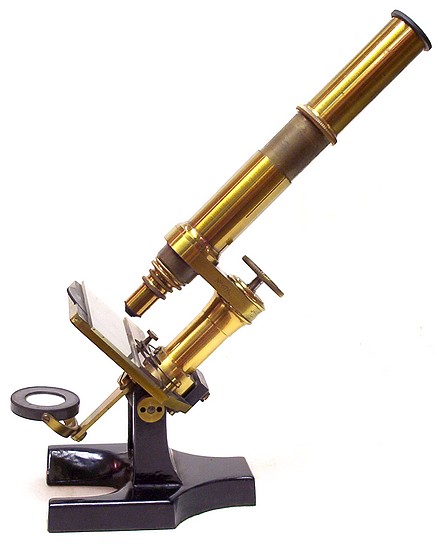 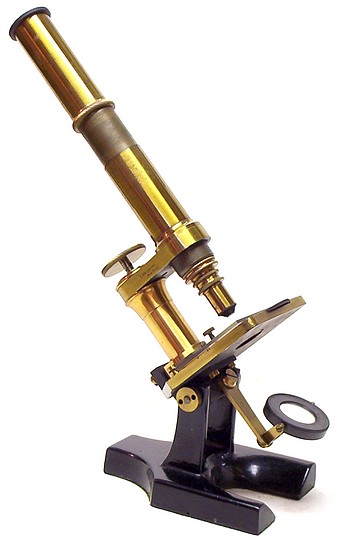 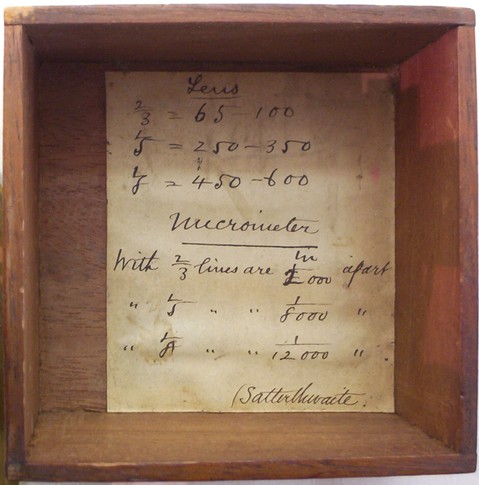 Attached to the bottom of the accessory drawer is a hand-written magnification chart. Of significance is that it is signed at the end with the relatively uncommon name "Satterthwaite". The literature indicates that a Thomas Edward Satterthwaite, Professor of Histological and Pathological Anatomy in the New York Post-Graduate Medical College, was an active microscopist during the latter part of the 19th century. Might this microscope be associated with him?

A quote from his book A Manual of Histology, 1882 suggest that he was familiar Grunow instrumentation as follows: "For ordinary histological purposes, a lens that will show the oscillatory movement in the mucous or salivary corpuscles is sufficiently high for practical purposes. This is accomplished by the ordinary student's one-fifth of Grunow, for example." Among the lenses associated with this microscope is indeed a 1/5 Grunow student's objective. Overall, it is likely that this microscope was an instrument in the laboratory of Professor Satterthwaite.

Thomas Edward Satterthwaite, M.D., (Belleville, N. J.), son of Thomas Wilkinson and Ann Fisher (Sheafe) Satterthwaite, was born March 26, 1843, at Spuyten Devil, Westchester Co., N. Y., which is now within the limits of New York City. In college he was a member of Linonia, Varuna Boat Club. In Sept., 1864, he entered the Scientific School of Harvard University, in the department of comparative anatomy, and became a private pupil of Jeffries Wyman. In November he attended one course of lectures in the Harvard Medical School, and then reentered the medical department of the Scientific School, where he remained until July, 1860. In Oct., 1865, he entered the College of Physicians and Surgeons, New York, and received the degree of M.D. from that institution in March, 1867. He was appointed an Interne of the New York Hospital, August 7, 1867, where he served for two years. He then went to Europe and continued his medical studies in Vienna. The Franco Prussian war breaking out, he entered the Prussian army, where he held the position of Assistant Surgeon and later of full Surgeon, remaining in the service till the spring of 1871. For these services he received from the Emperor William the Decoration of the Iron Cross. On his return to this country (December, 1871), he settled in New York City, where he has since practiced his profession. In 1872 he was appointed Microscopist and subsequently Pathologist to St. Luke's Hospital, holding these positions about twelve years; in 1873, Pathologist to Presbyterian Hospital, holding it fifteen years; in the same year he opened a private Laboratory for instruction in Histology, which was continued for seventeen years. In 1880, and 1881 he was President of the Pathological Society of New York ; in 1882 he was instrumental with others in founding the New York Post Graduate Medical School and Hospital and was its secretary for the first two years of its life, being also Professor of Pathology (1882-84), Professor of General Medicine (1884-90) and Vice President (1890) of the same. He is consulting physician to the Orthopaedic Hospital, and the Northeastern Dispensary, and President of the Babies' Hospital. In 1881 he published simultaneously in New York and London a " Manual of Histology'''' which has gone through several editions, and in 1887, in Detroit, a work on " Practical Bacteriology." He has also contributed extensively to various medical journals. A list of his published papers may be found in Atkinson's " Physicians and Surgeons of America " under his name, where is a biographical notice, as also in Johnson's Encyclopaedia. He is a member of the American Academy of Medicine, the New York Academy of Medicine, the Medical Society of the County of New York, the Medical Society of the State of New York, International Medical Congress, N. Y. Physicians Mutual Aid Association, Geographical Society, Genealogical and Biological Society and of the University and Century Clubs.

The following is his obituary as published in the American Decades:

Thomas Edward Satterthwaite, 91, physician and author; while studying in Vienna after receiving his M.D. from Columbia University, the Franco-Prussian War broke out and Satterthwaite received a commission as assistant surgeon in the Prussian army; on his return to the United States, he worked as a microseopist and pathologist at various New York City hospitals and founded and cofounded the Babies' Hospitaland Post-Graduate Medical School, New York City. He died 19 September 1934.

This microscope dates from around 1880. The Grunow brothers, Julius and William, emigrated from Germany to New York around 1849. They started in the scientific instrument business by first working for the optician Benjamin Pike of that city. By 1854, they began their own operation in New Haven CT where they concentrated on the production of microscopes. By 1864, they were back in New York. Some years later, the partnership ended. J. Grunow continued on to produce microscopes up to around 1892. The total output of the Grunows was limited in comparison to some other contemporary firms; on the basis of the observed serial numbers, they manufactured just over one thousand microscopes in total.