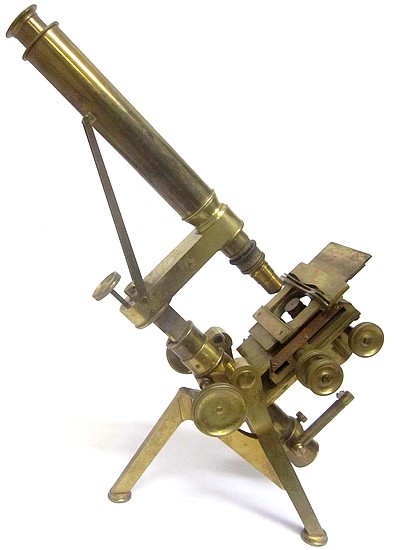 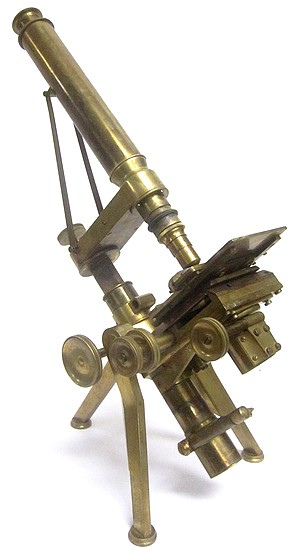 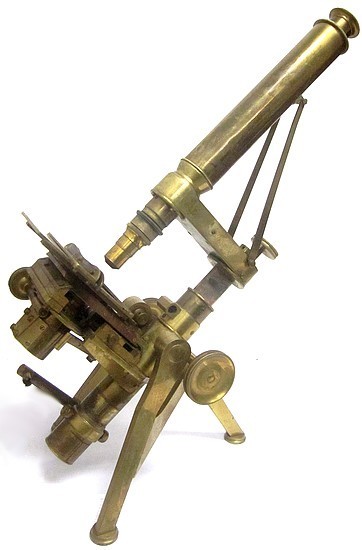 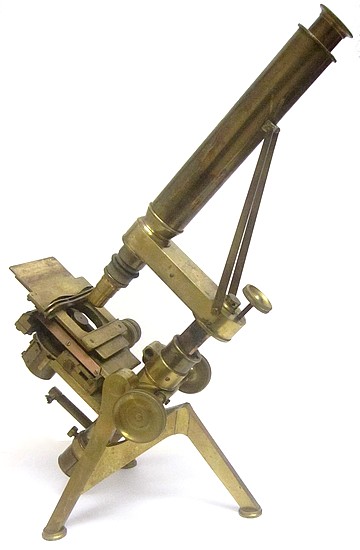 The following was extracted from an article entitled The Microscopes of Powell, Ross, and Smith by E. M. Nelson, Journal of the Royal Microscopical Society, 1900, pg 282:

The next Microscope made by Messrs. Powell and Lealand (fig. 79) is a very important one; it is figured and described in the November number of the London Physiological Journal for 1843 (only five numbers of this very rare work were published). We notice that both the Lister limb with the Jackson groove and the flat tripod with the two pillars have been discarded, and in their place we have a bar movement and a true tripod to carry the Microscope. Inside the bar or transverse arm is a lever of the first order, which moves only the nose-piece carrying the objective, the other end of the lever being actuated by an advancing cone on the end of a micrometer screw; the stage is similar to that of the preceding Microscope, viz. a Turrell's with non-concentric rotation. The instrument is still supported on trunnions, so the advantage of Jackson's plan is retained, although his form of foot is altered. There can be no doubt that Microscope built on the bar movement model had far superior fine adjustments to those made with a Lister limb, which at that time, and for forty years afterwards, were fitted only with short lever fine adjustments attached to the end of their body-tubes.

As the publication of this Microscope pre-dated that of Andrew Ross by one month, it follows that the credit of the invention must be given to Powell. In the article "Microscope" in the Penny Cyclopedia, 1839, Andrew Ross utterly condemns the bar movement; nevertheless in 1843 he adopted it, and it was exclusively used by that firm for about thirty years.

In 1847 Messrs. Powell and Lealand greatly improved this fine adjustment by suppressing the advancing cone, and by placing a direct acting micrometer screw in a vertical position on the top of the bar, immediately behind its pivot (fig. 80); and from that day to the present time the fine adjustments made by this firm have remained unchanged 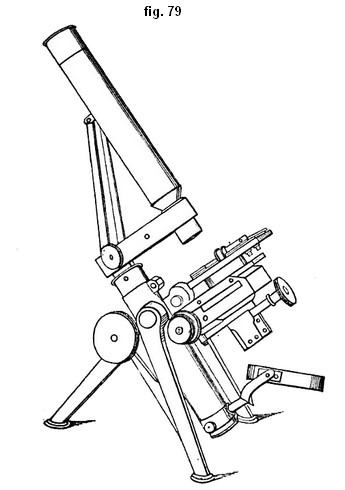 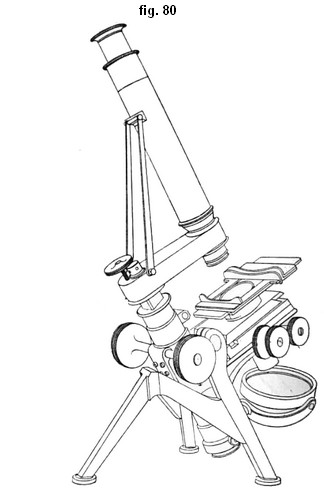 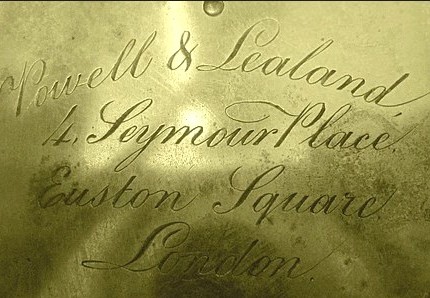 With respect to its size and features, this early P&L microscope is in many ways similar to what was later called the No. 3 model. It is outfitted with the original P&L eyepiece and achromatic condenser on a focusing mount, but the objective is a replacement and the mirror is lacking as is the storage case and other accessories. Nevertheless, it is an important representative of an early P&L designed tripod mounted microscope, a design that became famous and influenced the continued output of this firm beyond the end of the century.

The firm began with the partnership established between Peter Lealand & Hugh Powell in 1841. Previous to that, Hugh Powell produced microscopes under his own name and for the trade. At different times, they were located at various addresses in London: 24 Clarendon St., Somers town 1841-1846, 4 Seymour Place, Euston Sq., New Rd. 1847-1857, and 170 Euston Rd. 1857-1905. The business was operated by Thomas Powell, son of the founder, after his father's death in 1883. The firm ceased the manufacture of microscopes in 1901 although some models continued to be made by the firm's former foreman, Charles Perry, under the guidance of Thomas Powell with the work being done in the factory of Charles Baker. This continued up to 1914.