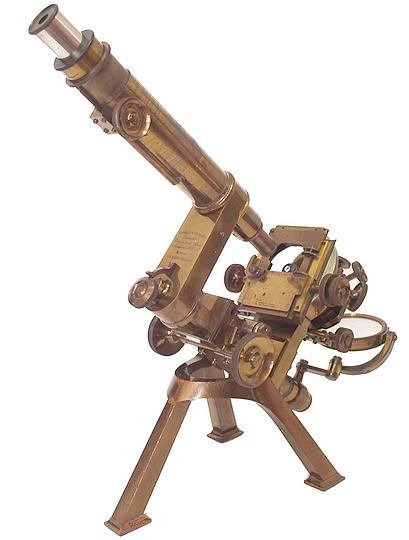 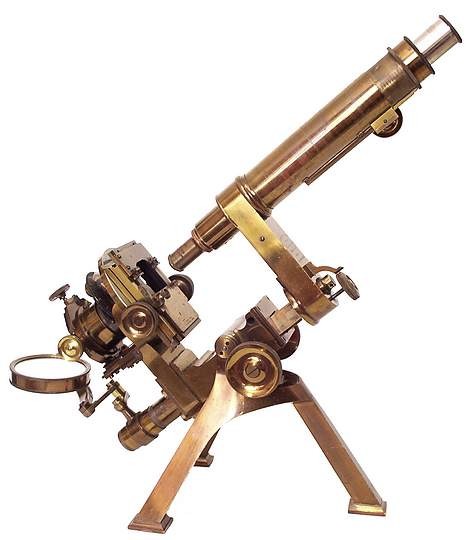 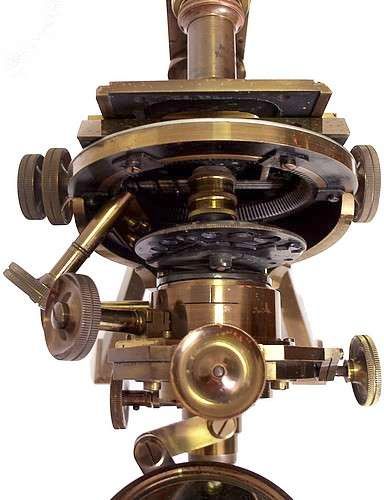 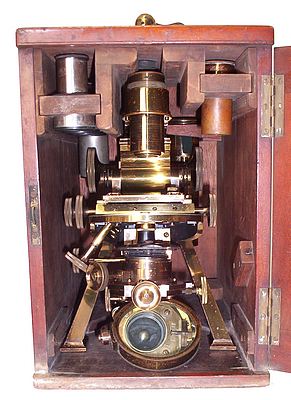 The objectives are Zeiss apochromates made for a 250 mm tube length with magnifications 24, 16, 12, and 6 mm, the last with correction collar.

The Powell & Lealand achromatic condenser. The condenser has two diaphragm disks that can be used in combination where the upper disk has conventional graduated apertures. The bottom disk is controlled by a lever and has apertures for dark field and oblique illumination. 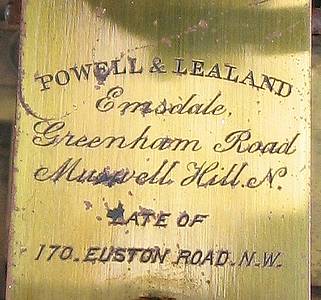 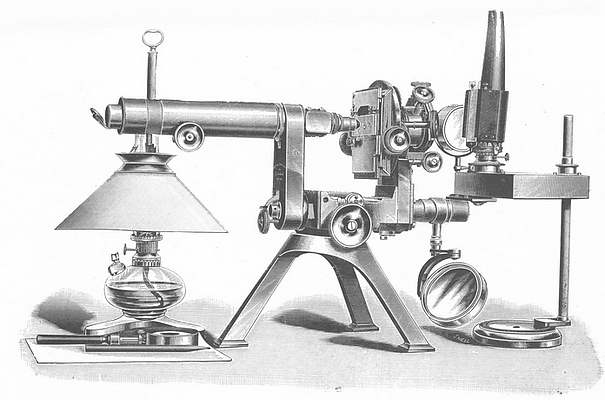 The firm began with the partnership established between Peter Lealand & Hugh Powell in 1841. Previous to that, Hugh Powell produced microscopes under his own name and for the trade. At different times, the firm was located at various addresses in London: 24 Clarendon St., Somers town 1841-1846, 4 Seymour Place, Euston Sq., New Rd. 1847-1857, and 170 Euston Rd. 1857-1905. The business was operated by Thomas Powell, son of the founder, after his father's death in 1883.

This instrument represents the final version of the Powell & Lealand No.1, which was in production for more than 60 years. The No.1 model was the top of the line instrument offered by the firm. The stage of the microscope is marked: Sold by, C. Baker, Optician, 244 High Holborn, London. According to B. Bracegirdle in Notes on Modern Microscope Manufacturers, Powell and Lealand ceased the manufacture of microscopes in 1901. In 1904, Charles Perry (the P&L foreman) began working in the factory of C. Baker where he continued to make instruments to be approved by Thomas Powell until 1914. Below is the price list for this model taken from the 1911 Baker catalog. This particular example has the rack and pinion adjustment to the secondary stage and the fine adjustment to the substage. 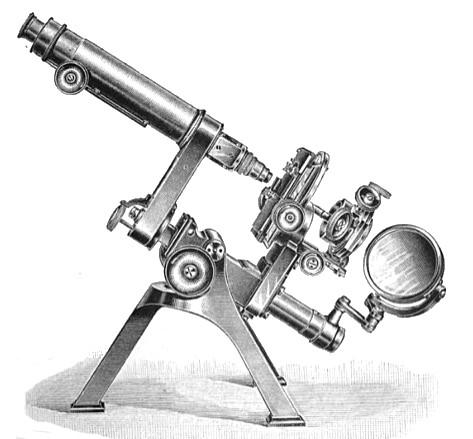 A binocular version of this microscope is also in this collection.

The following is the description of the Powell & Lealand No. 1 in Carpenter, The Microscope and its Revelations, Dallinger Edition (8th) 1901 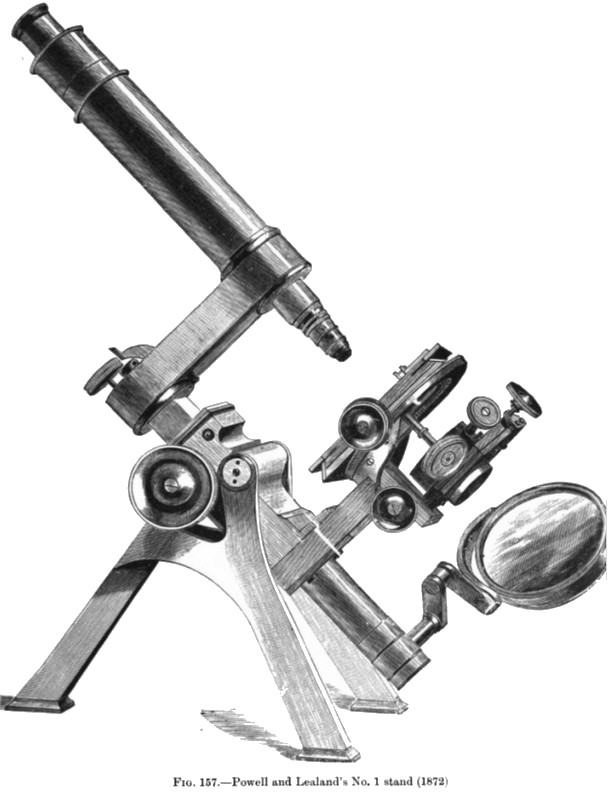 Beginning with the highest types we place first on the list Powell and Lealand's No.1. This instrument may claim seniority over all the foremost instruments, because for nearly fifty years it has practically remained the same. All its principal features were brought to their present perfection nearly fifty years ago, while all other microscopes during this period have been redesigned and materially altered over and over again. This is no small commendation, for during that period, its the reader so well knows, the apertures of objectives have been enormously enlarged, and with this has come a great increase of focal sensibility. As a result the majority of the microscopes of forty years ago are absolutely useless for the objectives of today, but the focussing and stage movements of Powell and Lealand's microscope still hold the first place.

Fig. 157 represent the instrument in its monocular form. The foot of the stand is a tripod in one casting; it has an extended base of 7 X 9 inches, forming at once the steadiest and the lightest foot of any existing microscope. The feet are plugged with cork, and when the body is in a horizontal position the optic axis is (as it should lie) 10 inches from the table.

The coarse adjustment is effected by a bar, consisting of a massive gun-metal truncated prism in form, which bears only on a narrow part at the angles. It extends sufficiently to focus a 4-inch objective. The arm which carries the body is of unusual length for the type it represents; but this gives a large radius from the optic centre of the instrument, and makes the complete rotation of the stage easy. Great efforts have been made to accomplish this in other instruments. The older Ross form from the shortness of the arm only allowed of a two-thirds rotation, and in the Lister model many different devices have been tried, the latest being the placing of the stage pinions in a vertical position above the stage, which is an unquestionable error.

The rotation of the stage in the Powell and Lealand model is by means of a milled head most conveniently placed, and the divided circle is on a plate of silver. It will also rapidly rotate by hand.

The arm is on a pivot, which allows it to lie turned away from the stage altogether, and, as we have already indicated, the length of the arm lent itself to the use of a longer lever for the fine adjustment. The milled head is placed behind the strong pivot of the arm, where vibration is impossible, and it is in an easy and natural position for the access of either hand.

The body may be, with great ease, entirely removed from the arm; this makes the use of the binocular or monocular body or of a short or long body a matter of choice, while it gives access for cleaning and other purposes to the nose-piece tube, as well as for the insertion and focussing of the lens used with an apertometer or an analysing prism. So also it is of service in low power photomicrography.

We have already referred to the stage of this instrument; but it may be briefly stated that it is large, has complete rotation, it has one inch of rectangular motion, being graduated to the 1/100 inch for a finder. There is the same speed in the vertical and the lateral movements, and the pinions do not alter their positions. The aperture of the stage is amply large.

The ledge of the stage has a stop placed on its left-hand side; this is held by a screw, but is removable at pleasure. Two massive brackets under the stage remove all possibility of flexure. 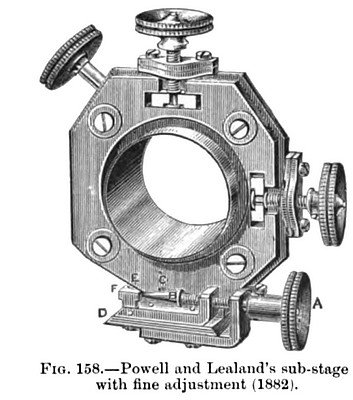 The sub-stage has rectangular movements by screw in either direction, as well as a rotary movement by pinion. The coarse adjustment is by rackwork, and a fine adjustment is added when desired. Fig. 158 illustrates this stage, showing its under side in order to enable the fine adjustment to be seen.

The vertical and upper horizontal milled heads are centring screws, acting at right angles to each other, while the diagonal screw to the left is the milled head, which causes the stage to rotate, the whole acting with great smoothness and accuracy, also enabling the operator to centre with complete precision, while, as we have already the milled head A works by an advancing cone the fine adjustment to this stage. The mirror is plane and concave, with double-jointed arm.

The finish and workmanship of this instrument are of the highest order. The seen and the unseen receive equally scrupulous care.

The present Editor has had one of these microscopes in constant, and often prolonged and continuous, use for over twenty years, and the most delicate work can be done with it today. It is nowhere defective, and the instrument has only once been tightened up in some parts. Even in such small details as the springing of the sliding clip the very best clip that can be used the pivots of the mirror, and the carefully sprung conditions of all cylinders intended to receive apparatus, all are done with care and conscientiousness.

A note must be made before leaving this microscope upon the size of the tubes in the body and the sub-stage. Powell and Lealand were the only makers whose gauge of tubing had a raison dêtre; the size of the tube was such that it would hike in a binocular body a Huyghenian 2-inch eye-piece, having the largest field-glass possible. The size of this field-glass depends on two factors.

1.  The distance between the centres of the eyes.

In order that the binocular may suit persons with narrow centres to their eyes, the distance between them should not be greater than 2 1/2 inches. The mechanical tube-length is 8 3/4 inches for the standard tube. When the eye-pieces were home in their places in the tubes they just touched each other, the inner sides of the binocular tubes being cut away; so under the above conditions a larger field than is thus obtained is simply impossible. The size of the field-glass determines the size of the eye-piece, and that was made to fix the diameter of body-tube.

Very wisely these makers made the tube of the sub-stage the same size, so to have one gauge throughout. This allows a Kellner or other eye-piece to be used as a condenser, thus reducing the number of adapters.

Lately this firm have altered their sub-stage tube to a gauge recommended by the Royal Microscopical Society. This involves an adapter where the sub-stage apparatus was adapted to the old gauge, or when an eye-piece is used as a condenser; as the size is too large for a binocular. 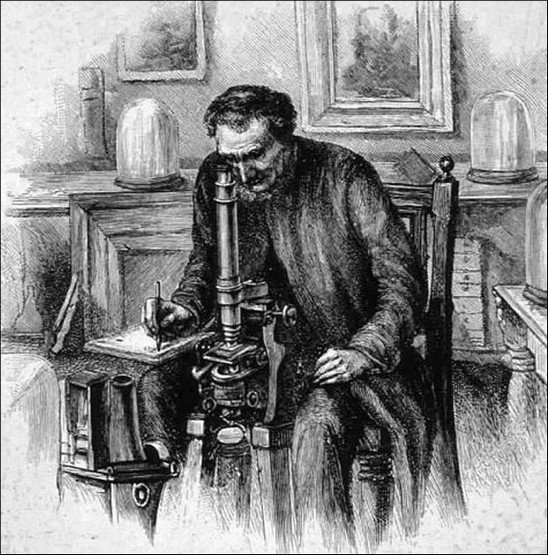