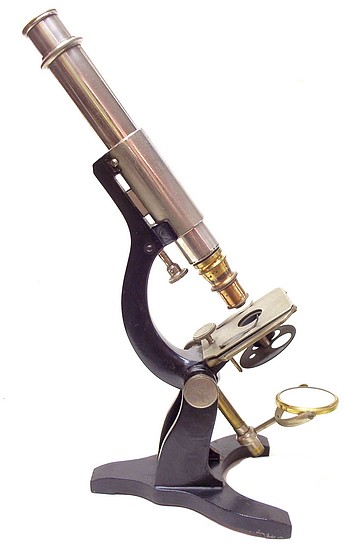 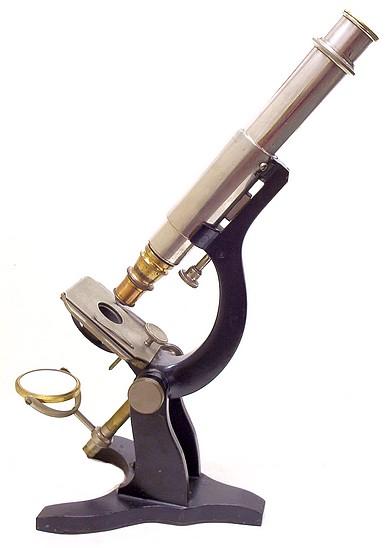 This is an unusual variation of the Tolles student microscope. The brass-work is nickel plated and the instrument has two fine adjustments controls. One is located on the stage and tilts the upper stage plate while the other is located under the limb and moves the outer tube using a simple screw mechanism. The coarse adjustment is achieved by pushing and pulling the main tube. 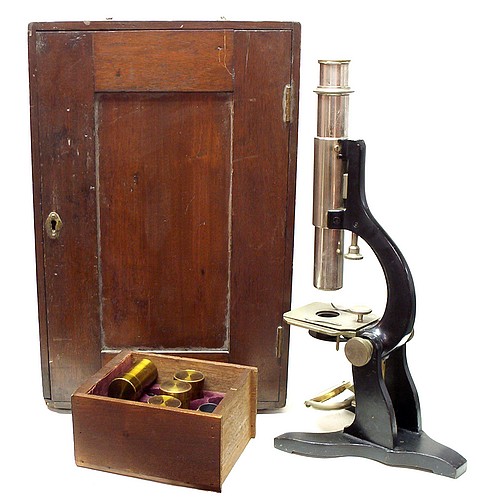 Among the Tolles objectives are those with canisters marked 1/5, 1/4, 1/2, and 1-inch. Another, without canister, is likely also a 1/4-inch focal length objective. The microscope is provided with a stand that supports the concave mirror for use that will allow illumination of the specimen from above. This is useful for observations of opaque objects.

The following is from the 1883 Tolles catalog: 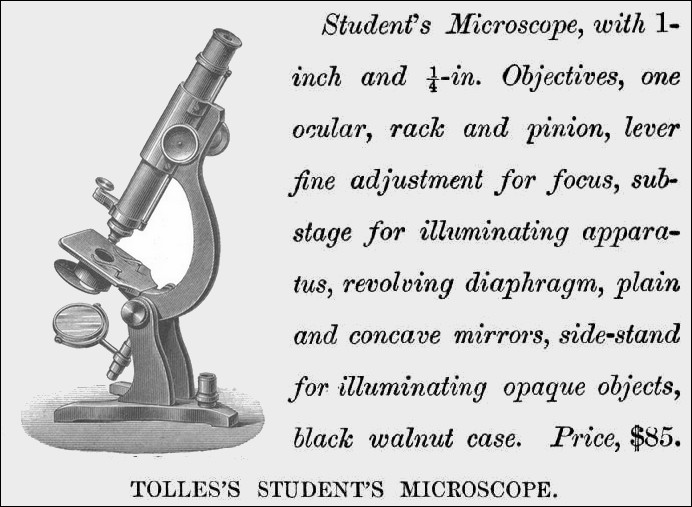 This instrument, designed under the advice of several of the Professors of the Medical School of Harvard College and other well-known Microscopists, is of the pattern and size most approved by experts. The base, uprights, and curved arm are of iron, handsomely japanned; on a trunnion joint, made on a new plan to wear well, by which the instrument can be placed in any position, from vertical to horizontal, with a stop to prevent movement in either direction beyond these points. It is furnished with a l-inch Eye-Piece, two second-quality Objectives, of about 1 inch and 1/4 inch power, giving about 80 and 350 diameters, a plain Stage with spring clips for holding the object slides, revolving Diaphragm, concave Mirror, with movement to give oblique light for illumination of opaque objects, the mirror is removed to an upright stand; course adjustment for focus is effected by sliding the compound body which is held in its place by a spring, fine adjustment by a movable plate and screw on the stage, which is efficient with high powers. The stand is made with all the care bestowed on his first-class instruments, and proves satisfactory for the use of amateurs, students, and the ordinary work of the medical profession. The workmanship is superior to that of any instruments of the class made in Europe. The form is the Jackson pattern recommended by Dr. W. B. Carpenter as the one least liable to tremor, and is the one most approved by all American microscopists. Price, in an upright Black Walnut case, $50. Stand and Case alone $28.

Variations and Additions. - Extra Eye-Pieces, 2 in. 1 1/2 und 3/4. $4 each; a superior Camera Lucida $5; Sub-Stage for Accessory apparatus, $5; a Sliding Stage, giving vertical and horizontal motions by the hand, and adapted for the use of Mathwood Finder, $15. Fine adjustment by lever and micrometer screw, $16. Rack and Pinion for coarse adjustment, $12, drawtube, $4. Plain Mirror, $3. Thin glass stage to rotate on the optical axis, $10. The stand in all brass, $10. Any of TolIes's first quality Objectives may be used on this instrument, and can be added to order at list prices. Packing Boxes for transportation, $1. 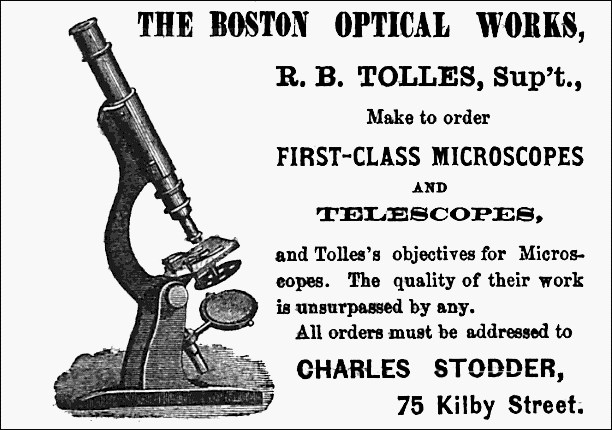 The following was extracted from The National Cyclopedia of American Biography, vol. XIII, 1906 TOLLES. Robert B , lensmaker, was born in Winchester, Litchfield co., Conn., about 1825, son of Elisha and Harriet Tolles. His father was an inventor, but from lack of funds was unable to develop any of his ideas. The son was educated in the common district school and passed his boyhood at home and on his grandfather's farm near by, working to aid in supporting the family. In 1813 while in Canastota, N. Y., he accidentally visited the workshop of Charles A. Spencer, and soon afterwards he entered the service of the celebrated lensmaker as an apprentice. Under the instruction and guidance of this remarkable man young Tolles learned the special business in which he displayed such genius. In 1858 he started in business on his own account in Canastota, removing to Boston, Mass., nine years later, where he organized the Boston Optical Works. He was affiliated with this company the remainder of his life, for the first four years as superintendent and thereafter as sole proprietor. His one aim in his business was the improvement of the microscope, and his achievements in this line prove that he was well qualified for the task by his " great theoretical and practical knowledge of the science of optics, united with mechanical and inventive genius and marvelous skill of eye and hand." While still in the service of Mr. Spencer he devised a cover correction for objectives, and invented and patented a solid eye-piece. In 1858 he made his first immersion objectives, and objectives with two fronts one to be used as an immersion and the other dry, and in 1866 he obtained a patent for a stereoscopic binocular eye-piece. He invented many other devices and appliances for the microscope, as well as some telescopes remarkable for their short focal length in proportion to the diameter of object-glass and for their defining and penetrating power. The great step, however, which placed him, together with Charles A. and Herbert R. Spencer, at the head of his profession, was the construction in 1873 of an immersion one-tenth objective with an aperture greater than that corresponding to infinitely near 180 degrees in air. It was a three system lens which had an aperture of more than 110 degrees in balsam, or 1.25 N. A., and which is said to have produced " a revolution of opinion and practice among users and makers of microscopes all over the world." At the same time he also made his first lens of the duplex front formula one-fifth inch glycerine immersion of 110 degrees balsam angle. On Aug. 10, 1883, he was elected an honorary member of the American Society of Microscopists. Notwithstanding his valuable achievements, the last ten years of his life were years of suffering and hardship; he worked at his bench when he should have been in his bed, denying himself all the luxuries and many of the comforts of life. He greatly suffered from a disease of the lungs which was contracted at an early age and which caused his death. During his last illness, he had a microscope brought to his bedside and there on his deathbed examined and tested the lenses. Only a few minutes before his death he was occupied in correcting the degrees of aperture of an imaginary lens and when he reached 150 degrees, he stopped, turned his head and said faintly, "Goodbye. He was married in 1853 to Freelove S. Dickey, but was left a widower a few months later. He died in Boston, Mass. Nov. 17, 1883.

For a discussion of the life and work of Robert B. Tolles see: Three American Microscope Builders published by the American Optical Company 1945.

Other examples of the Tolles Student's microscope are located in this collection and at the following institutions:

The Museum of the History of Science, University of Oxford