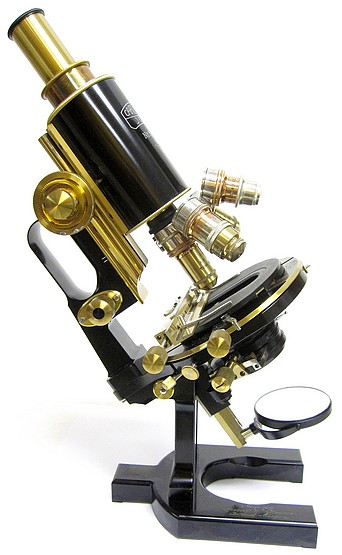 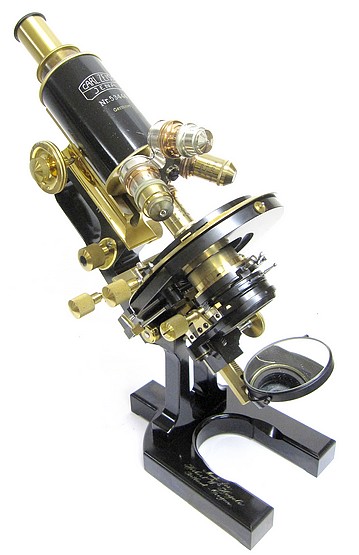 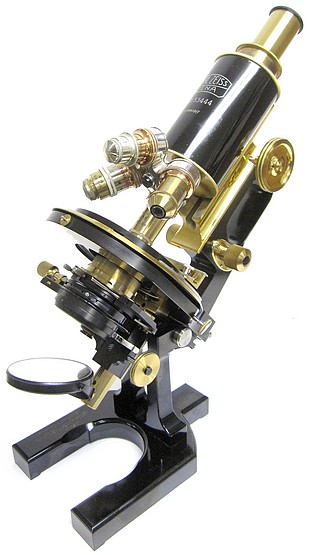 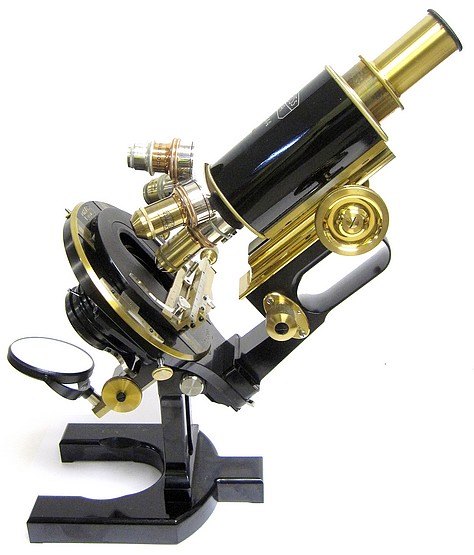 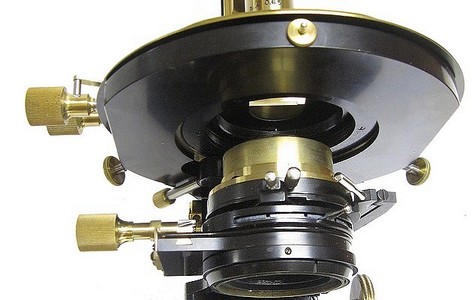 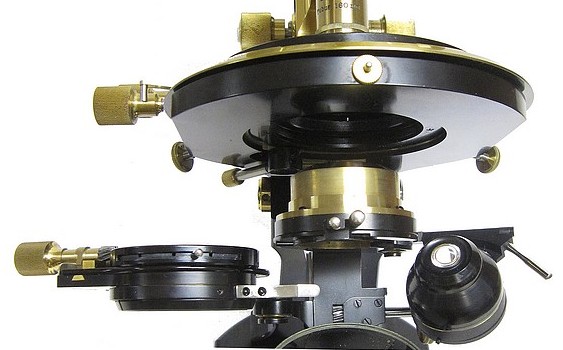 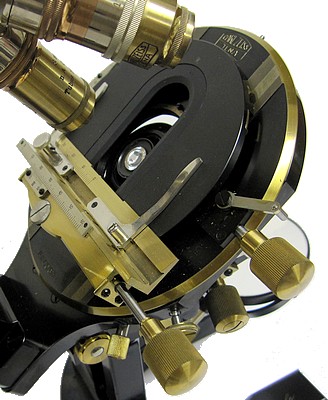 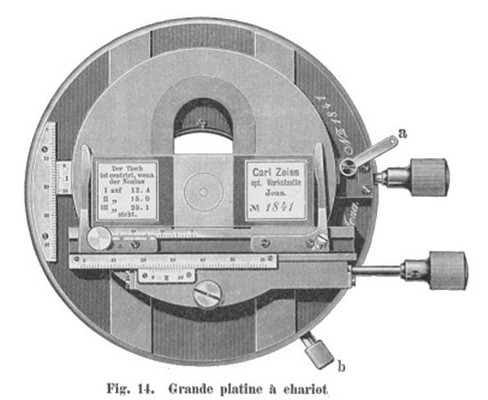 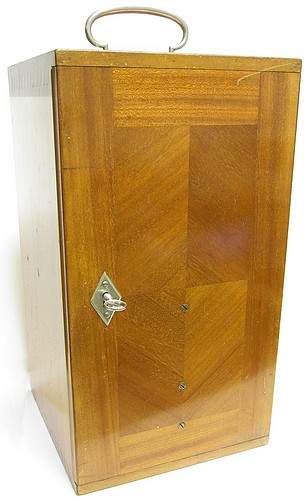 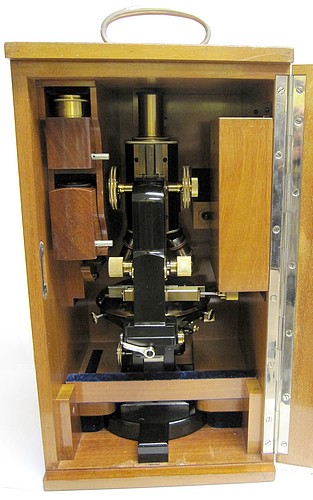 The accessories supplied with this microscope include four apochromatic objectives marked 2, 4, 8, and 16 mm, an a3 objective, six compensated oculars marked 2, 4, 6, 8, 12, and 18, one conventional ocular marked 2, two stops, a quadruple nosepiece, and a blue glass filter. The substage consists of a rack and pinion focusing Abbe condenser with swing-away iris diaphragm and condenser and having off-centering adjustments for oblique illumination. This microscope is an example of the Zeiss IB model. It is based on a design by Max Berger of Zeiss first introduced in 1898 (Zeitschrift fur Instrumentenkunde, vol. XVIII, 1898, pp. 129-133). The major innovations of this design were a new type of fine adjustment and a limb having an integral handle (now, often referred to as a "Jug-Handle" microscope). The various version of this stand differ primarily in the type of stage attached to the instrument. The 1B model incorporates the Large Mechanical Stage. Elsewhere on this site is an example of the similar Zeiss 1C Jug handle microscope. The following extract is from the Journal of the Royal Microscopical Society, 1898 . It describes the original Berger microscope.

Berger's New Microscope. The novelty in this instrument is entirely confined to the substage, and is intended to meet the constructional difficulties involved in adapting the adjustments (especially the fine) to Microscopes used for high-power photomicrography. Usually the strain on the fine adjustment caused by the extreme length (and consequent weight) of tube is a decided disadvantage. Herr Berger arranges so that both his coarse and fine adjustment are independent of the drawout. The Microscope is also suitable for ordinary use. Fig. 98 gives a general view, fig. 99 a vertical section, and fig. 100 a ground plan.

The oval-shaped piece B is arranged as a handle, which affords a strong brace between the fine adjustment path V (fig. 100) of the micrometer work and the special hollow-cast standard H (fig. 99). The fine adjustment differs widely from the general form, and is fitted by means of a very strong dove-tail shaped slide F, so hollowed out in its upper part that it affords the requisite room for the spiral spring W. The under part of F is pierced, and conceals the very long nut for the micrometer-screw M. Contact ensues between the hard-tempered extremity of the micrometer-screw and another also hard-tempered anvil-shaped steel piece which is screwed into the lid D2, closing dust-tight the under opening in the standard H. On the fine adjustment slide F rests, very solidly screwed, the gear P for the coarse movement. The aluminum tube T (fig. 99). In order to avoid undue wear and tear of the mechanism is connected in the usual way with the tooth-rack by means of a copper companion piece Z (fig. 100). The coarse adjustment follows the usual models. The micrometer-screw is thus seen to be packed away in the hollow stand for protection's sake. It is completely sheltered from direct hand-touch. It is turned by means of an endless screw E (figs 99 and 100) which gears into the toothed wheel S, working on the flange of the screw, and carries the usual micrometer knob. By means of this arrangement two conditions are satisfied: the fine adjustment is slowed in the most desirable way without the necessity of requiring from the micrometer-screw too fine a motion, and the position of the endless screw, so firm and safe in the handle-like stand, renders even rough mechanical operations entirely without effect on the fine adjustment.

In order to avoid injury to the micrometer-screw when the slide F is at its extreme highest or lowest position, a special protection arrangement, limiting the play of the endless screw, is contrived for the fine adjustment. As is seen from fig. 100, the endless screw E engages another toothed wheel S, which is a nut working on a vertical screw. This nut S2 comes into contact with the upper or lower surface of the chamber containing it before the fine adjustment slide F reaches the end of its travel, thus preventing strain on that part of the mechanism. 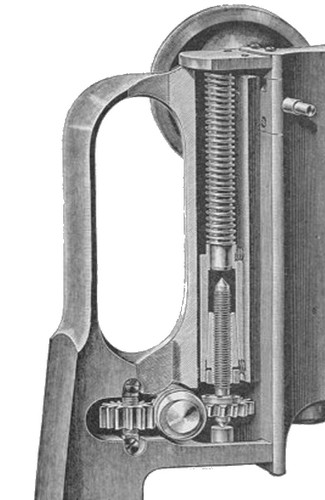 This microscope was formerly the property of Dr. Herbert W. Hegele MD (1877-1958). It was purchased for this collection from his granddaughter who has indicated that the doctor had a predilection for having his possessions engraved with his name. Accordingly, this microscope is engraved on one leg of the horseshoe base "Made for Herbert W. Hegele Portland-Oregon". The Zeiss archives (see below) indicate that this microscope, model IB, was delivered to the retailer the Physicians Systems and Supply Co. of Portland Oregon in 1911.

Dr. Hegele was an interesting and accomplished individual. The following short biography is quoted from the website Sam Lisker's ColtAuto.com

"Herbert W. Hegele M.D. was the first born child prodigy son of Charles Hegele (who was one of the wealthiest and most influential citizens of young Portland - he owned the largest dairy operation in Oregon and supplied all the big fine hotels downtown with all their dairy products). The dairy was so big it became the town of Scapoose, just 10 miles down the Columbia from Portland.

Herbert Hegele's family tree is traced back to Germany as Charles Hegele's great grandfather was the famous German philosopher, Georg Wilhelm Hegel. The "e" was added when Charles Hegele came to America and didn't want to connect himself with what was happening with Kant, Marx, Engels, and Hegel during the time of the Bolshevik Revolution He came all the way out to Portland, Oregon and changed his name. It's not certain if he was "chased" as his politics at the time are not known.

In 1899 at the age of 22, Herbert Hegele graduated from Rush Medical College and the University of Chicago Law School at the same time.  Both graduation ceremonies were held on June 30th, 1899 in Chicago and since he couldn't be in both places at the same time, he missed the Law School Ceremony. Medicine was his preferential profession, although he continued to practice law right up to his death in 1958. Hegele was a most unusual man in that he could speak 11 languages and read and write Latin. He played concert violin in Carnegie Hall when in his early teens. Hegele owned the first "horseless carriage" in Portland, the first of many incredible cars (Duesenberg, Stutz Bearcat, Packard Limos, Rolls Royce, etc.) He also had an affinity for the finest factory embellished arms.

Hegele's wife was the first Kellogg Cereal Girl (appearing on Kellogg's first cereal boxes as a picture of good health and beauty), born in Battle Creek, MI on March 26, 1889. In 1908, she and Dr. Hegele were married and he found her a job through his friend down at the Union Pacific Railroad Depot.  The next year Dr. Hegele ordered from Colt this factory inscribed pearl handled .25 caliber pistol for his wife who, for 16 years, worked at the Union Pacific Railroad Depot and had to travers Man Town along the tracks to catch her ride to and from work each day. Dr. Hegele was the personal physician to the President of the Union Pacific Railroad during this period and a prominent local businessman.  He was also a practicing attorney and a deputy sheriff for Multnomah County, Portland, Oregon." The trade card below accompanies the microscope.