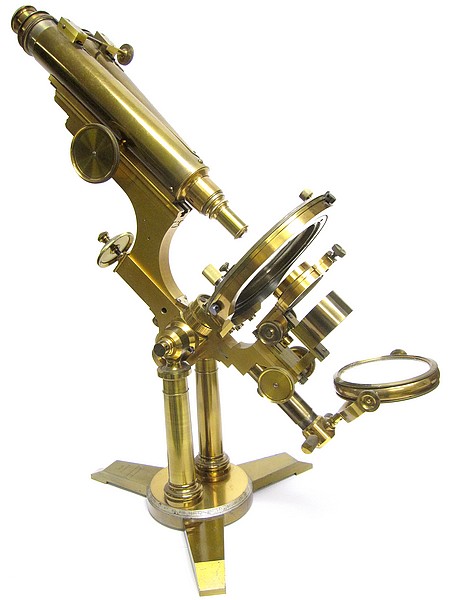 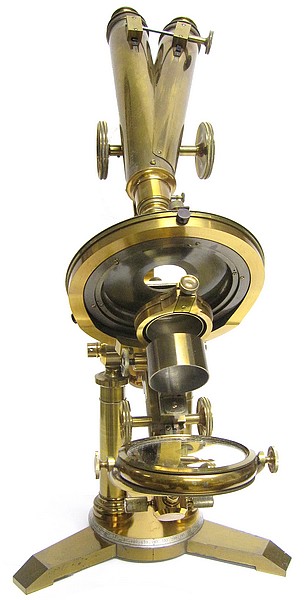 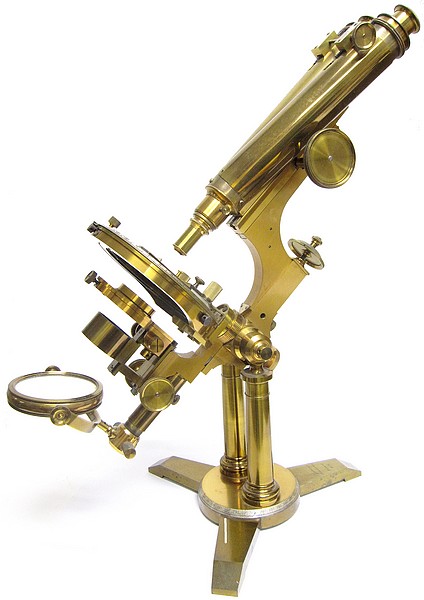 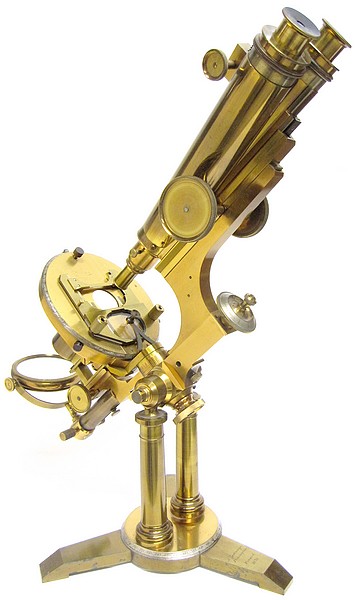 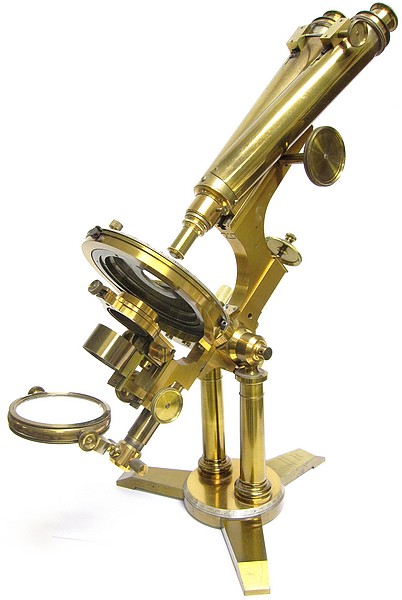 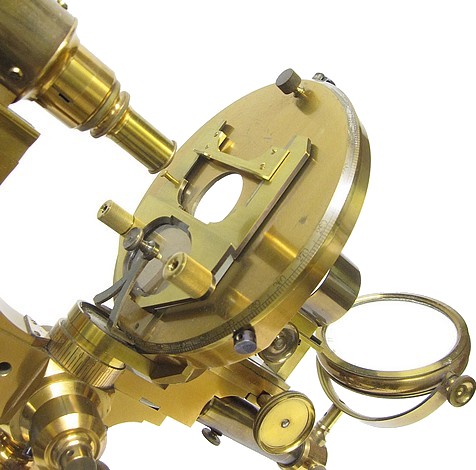 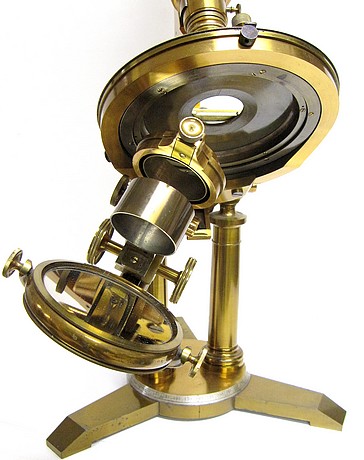 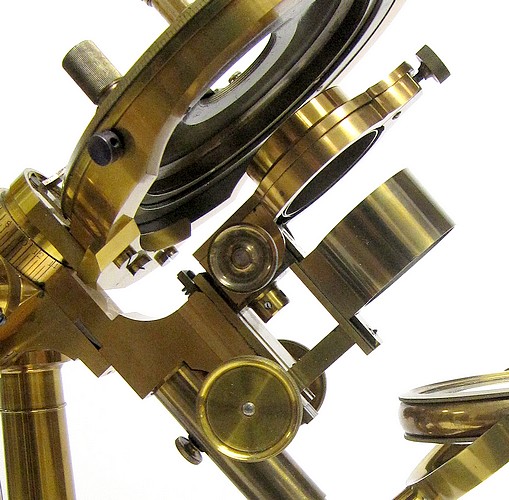 The American Centennial binocular model microscope was first exhibited by Joseph Zentmayer (1826-1888) at the Centennial Exposition in Philadelphia in 1876. The example shown here has Zentmayer's elaborate centering sub-stage. Another earlier example of this model with serial number 1343 is also represented in this collection. It differs primarily from the example on this page in not having the centering sub-stage. The binocular American Centennial is rather uncommon. As quoted by S. H. Gage in Microscopy in America (1830-1945), 1964 in a letter dated 1938 from Arthur H. Thomas (a Philadelphia instrument supplier) to H. N. Ott of the Spencer Lens Co. in reference to the binocular version of this microscope, it was stated that "there were forty-four of these instruments made in all, and they are now museum items". So far, only a fraction of these are known to have survived.

The American Centennial binocular model microscope is considered by many the finest and most influential American microscope manufactured in the 19th century. Prior to the introduction of the American Centennial, the Grand American model was the top-of-the-line microscope produced by the firm. The Aug. 15, 1876 patent describes the fine adjustment mechanism and a novel swinging substage which allows extreme oblique illumination (it could even swing above the stage thus allowing illumination from above). The swing was designed so that the condenser and mirror would remain in focus on the specimen at any angle. This type swinging sub-stage became very popular. It influenced the manufacture of new models made both in America and in England (e.g., the Ross-Zentmayer models, the Beck International model, etc.)

See the article written by Zentmayer entitled "What I Know About Late Improvements of the Microscope" published in the Journal of the Franklin Institute, LXXXIV, 1877

The following was extracted from the 1895 Zentmayer catalog

THIS Stand was originally designed and constructed in 1876 and shown at the Centennial Exhibition in Philadelphia. It is made entirely of fine brass of the best finish, and is full nineteen inches high when arranged for use. It is mounted on a circular platform revolving on a tripod base, beveled silvered and graduated in degrees for measuring the angular aperture of objectives. Upon this platform two pillars are planted, between which the bar and trunnions in one piece swing, allowing the instrument to be inclined to any angle.

The coarse adjustment is effected by rack and pinion. The arm carrying the body is provided with two adjacent slides, the upper and longer one bearing the tube with rack and pinion movement, and sliding in the lower one, which is lifted by a lever of the first order, actuated by a milled-headed micrometer screw in convenient position at the back of the instrument. At the bottom of the lower slide there is a shoulder against which the lever acts, and a spring above presses this shoulder down, insuring its continuous contact with the lever during adjustments. All the mechanism is contained within the arm, which is so hollowed as to secure both lightness and greater rigidity. This fine adjustment was originally invented by Joseph Zentmayer and first introduced on this instrument. It is absolutely free from lateral motion, and exceedingly sensitive. Its construction prevents wear, and is so positive that a revolving nose-piece and attached objectives can be easily carried without injury. It also acts as a safety appliance in case an objective is accidentally racked down against an object, for the spring yields quickly to upward pressure. The fine adjustment, in all other instruments of the Jackson model placed in front of the body, is thus removed to the most convenient and stable part of the instrument; the body is not touched directly in focusing, and the relative distances of Objective, Binocular Prism, and Eye-piece remain constant. 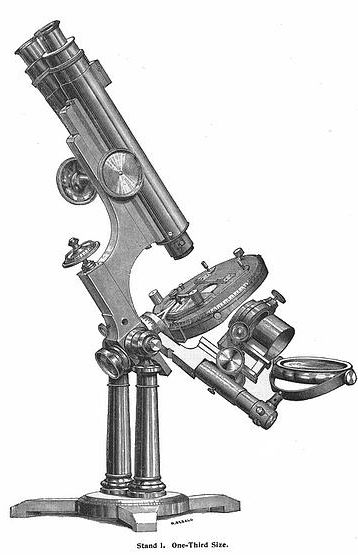 It has been criticized that the micrometer screw in this fine adjustment has to bear the entire weight of the body just as in the Continental models, but not in accordance with the facts. The lever varies in length, and the fulcrum is placed according to the size of the instrument. One arm of the lever is about five times longer than the other, whereby the weight of the body and the motion imparted is reduced in the same ratio. Time has vindicated its efficiency and practicability, and the same plan is now used by most of the well-known manufacturers.

The tail-piece carrying the sub-stage for illuminating or other apparatus and the mirrors can be swung around a pivot behind the stage, of which the axis passes through the object observed, so that in every position it is in the focus of the illumination. This important arrangement, without which no microscope can be considered complete, is carried out in a simple and substantial manner. Although having only a single joint, it admits of being swung over any of the stages, from either side, and a complete revolution is only prevented by the body of the instrument. A graduated circle on the upper collar registers the degree of obliquity, and a stop indicates when it is central and parallel with the body.

As an object placed on the stage is in a plane with the axis of the trunnions, it is obvious that, if the instrument is placed in a horizontal position, the object is in the axis of revolution of the graduated platform, and the angular aperture of an objective focused on this object can be easily measured. It is equally obvious that in this position the object is in the centre of all rotation of the instrument, the revolving stage and platform and the swinging sub-stage.

It is also apparent that the parts of the instrument are distributed proportionately on each side of the trunnion joint as an axis of inclination, so that when horizontal the body and its accessories on one side of the perpendicular passing through the stage and supporting pillars are balanced by the sub-stage and its accessories on the other side, whereby perfect stability is secured.

The principal stage was devised in 1862. It consists of a bell-metal ring, firmly attached to the bar, but adjustable by means of set-screws, to be perfectly concentric to the optical axis of the instrument. This ring receives the stage platform, which makes a complete revolution. The outer edge is beveled, silvered and graduated into degrees to serve as a goniometer. The carrier for the object rests on plate-glass, kept by a spring and ivory-pointed screw in sliding contact on the two rails on the stage platform, which arrangement gives an exceedingly smooth and firm movement and a freedom of motion not obtained in any other way.

Owing to its simplicity, convenience and durability, this stage has been extensively copied at home and abroad. The stage may be easily detached by simply unscrewing the nut at the back of the bar and another substituted, as, for instance, a plain or mechanical one.

A mechanical stage, revolving, graduated and adjustable, can be furnished at an additional cost of $40. It is five inches in diameter; the lateral movement of 1 1/4 inches is accomplished by a screw, and the longitudinal movement of 1 1/8 inches by rack and pinion. Although very rigid and steady, it is extremely thin, admitting an obliquity of full 70°. All stages are reversible on the stand, thus admitting unlimited obliquity and retaining the object always as the centre.

The sub-stage is divided into two cylindrical receivers, to facilitate the adaptation of several accessories at one and the same time. The upper cylinder has perfect centering adjustment and the lower cylinder can be moved up and down or entirely removed.

The Wenham Binocular body has been adopted because of its simplicity, good effects and ready convertibility to a Monocular Instrument, but its mechanical arrangement has been materially improved so as to diminish some of the defects necessarily involved in the principle.

Each Centennial Stand is provided with a fine Mahogany Case, with handle, and side case for accessories. 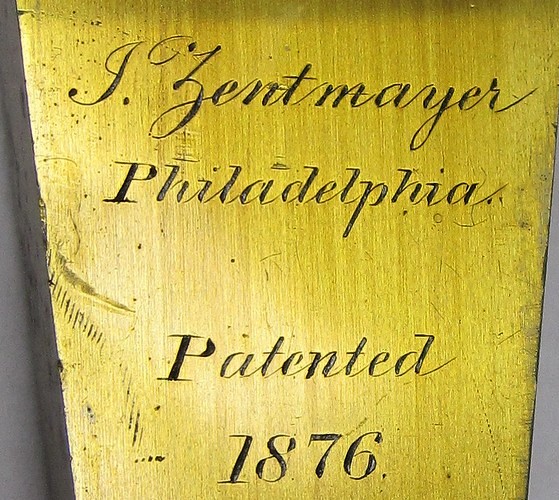 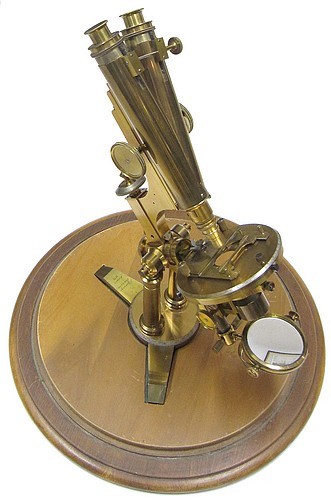 Unfortunately the microscope was obtained without its storage case, but instead it came with a custom made wooden display stand having a cut-out for the tripod base and which at one time accommodated a bell-jar.

This microscope was on display for a number of years at the Haddonfield New Jersey Public Library. It was purchased for this collection when the library decided to remodel. 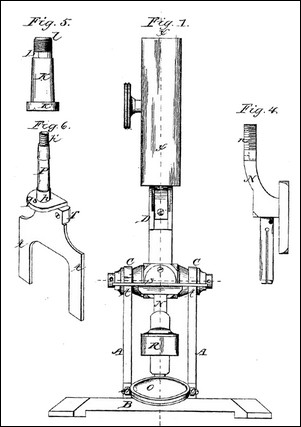 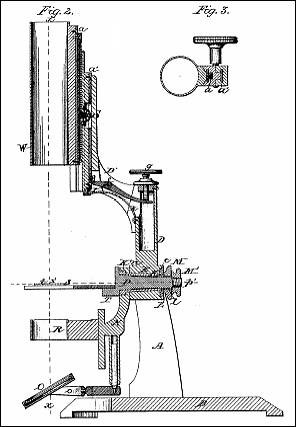 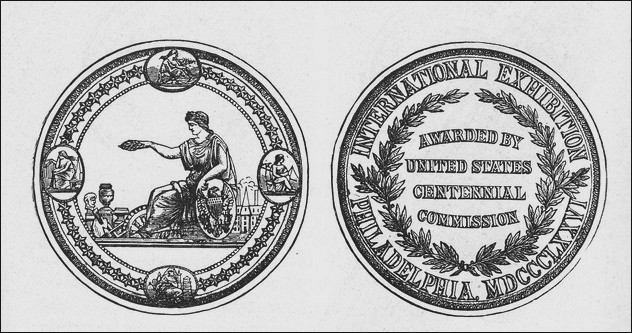