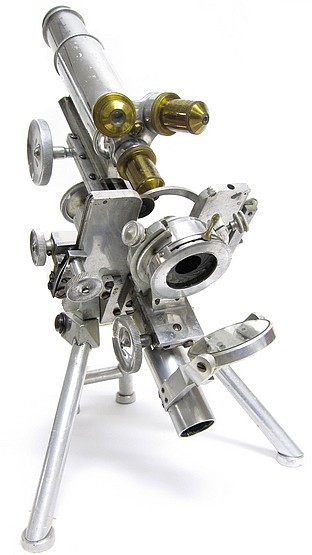 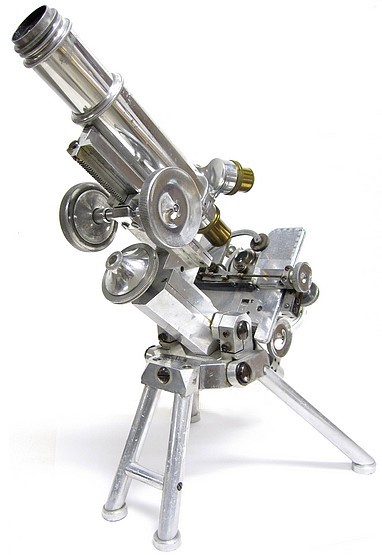 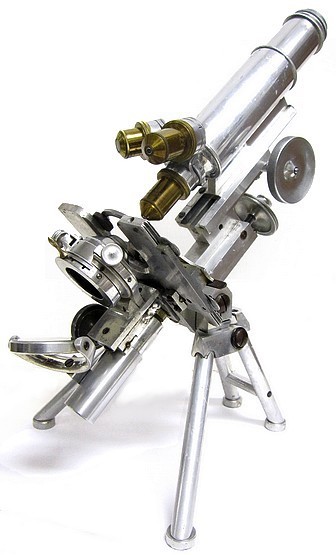 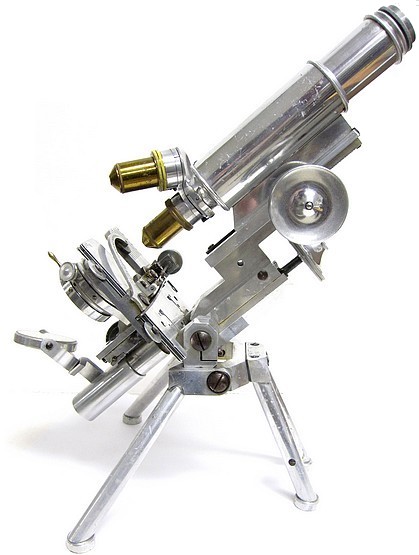 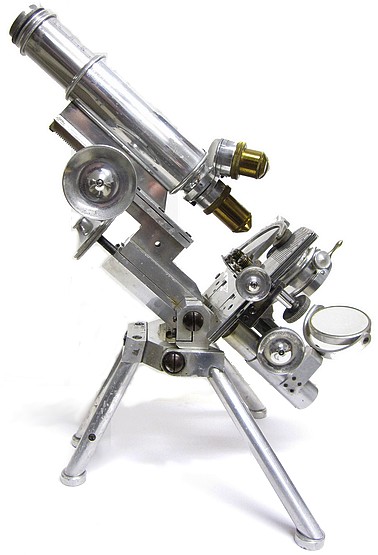 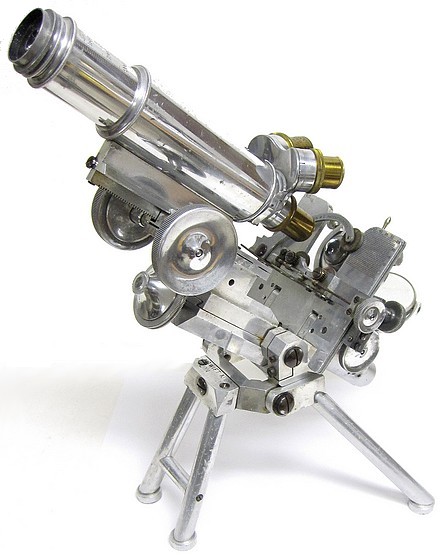 While this microscope was found without its storage case, a number of the accessories did survive. Among these are three eyepieces, two of which are made of aluminum, an aluminum Abbe condenser with iris diaphragm, an aluminum dark field condenser by Baker marked "concentric condenser", an aluminum Swift patented mechanical stage with serial number 144, an aluminum triple objective changer, and four swift objectives, three of which have their canisters. 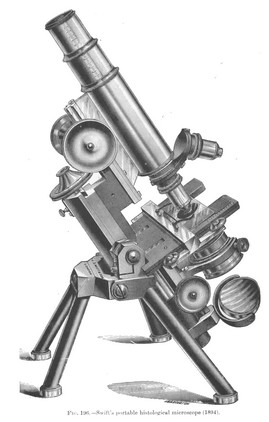 The following was extracted from Microscopy, The Construction, Theory, and Use of the Microscope by E. J. Spitta, 1920

Swift & Son's Portable Histological Microscope (Fig. 202) of great excellence. Although primarily designed for the stud of Histology, it is perfect as an all-round instrument. It has the peculiar feature first of having four legs, and secondly of being collapsible, for it can be packed away in the smallest mount of space imaginable, although a little practice is necessary to do this, as a study of Fig. 203 will lead the reader to understand. It may therefore claim admission into the class of Portable microscopes. Constructed for the short tube, it can be extended for. an optical tube-length of 10 in., which makes just a trifle too short for the convenient and scientific use of long-tube objectives, without an additional draw-tube or the use of Zeiss "sliders" or a revolving nosepiece, either of which increases the length sufficiently. 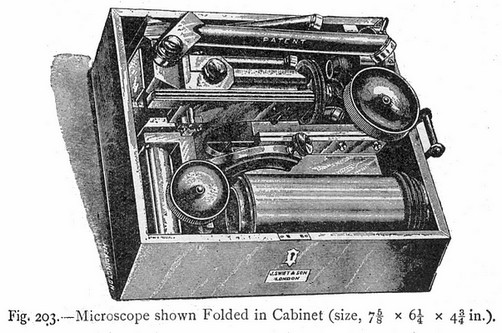 This is an uncommon variant of the Swift Portable Histological microscope. Except for the objectives, springs, screws, racks, and pinions, it is made entirely of aluminum. Evidently, the purchaser of this microscope sought to have one that was as light as possible, most likely for actual field/expedition use. A brass example is also in this collection and without any optics, it weighs 6.5 pounds, while this aluminum version comes in at only 2.5 pounds.

The following article from Nature, 1892 suggests that Swift & Son was the first firm to have produced an aluminum microscope. Unfortunatley, the article does no reveal the date of manufacture of the microscope.

Royal Microscopical Society, October 19.--Mr. G. C. Karopi Vice-president, in the chair.—The chairman exhibited and described Messrs. Swift's aluminium microscope, which he believed to be the first microscope made of that metal. The chief point in the instrument was its extreme lightness, the whole when complete, and including the condenser and eyepiece, weighing only 2lb. 10 1.2 oz. as against the weight 7lb. I3 oz. of a precisely similar stand made in the usual way of brass. It was perhaps not entirely correct to say that every portion was of aluminium, because there were certain mechanical difficulties met with which prevented some portions from being made of that metal ; for instance, he believed it was almost impossible to cut a fine screw upon it without the thread "stripping" and it was also found extremely difficult to solder, so that the necessary screws in the instrument were made of brass, the Campbell fine adjustment of steel ; the rack and pinion coarse adjustment was also not made of aluminium, and the nose-piece was of German silver.


The following note taken from the Journal of the Royal Microscopical Society, 1895 describes a folding portable aluminum microscope produced by Swift. This is likely the same model shown on this page given that the weight of the instrument matches the weight found here:

Mr. J. M. Swift exhibited a folding portable Microscope, made to the order of Dr. Keightley, entirely of aluminium, with the exception of the mechanical fittings, which were of steel. It was provided with a removable mechanical stage, and the fine-adjustment was on the differential screw principle, rather finer than 1/200 in.,and divided in French measurement. The legs were of solid drawn aluminium, and although very light, the instrument was remarkably steady.

Dr. Dallinger said he had felt and expressed the opinion a long time ago that the use of aluminium for a travelling Microscope would be of great advantage. This one was beautifully made, and was extremely light and firm. With slight modification it would form an extremely useful portable instrument.

The Chairman said he had been afforded the opportunity of seeing this Microscope and of comparing it with a brass one of the same size and pattern, but he could scarcely add to what Dr. Dallinger had said about it. It was rather a large instrument to come under the title of a " portable " Microscope, though, of course, all depended upon how much portability was wanted. This certainly seemed to be thoroughly steady and not easily turned over, although he was quite surprised at its lightness as compared with brass, the difference being 2 lbs. 5 1/4 oz. as against 6 lbs.

Messrs. Swift exhibited a microscope on their four-legged tripod model, but made of aluminium throughout, with the exception of the rack work, screws, and wearing surfaces, these latter being of steel, or faced with thin steel plates. All the fittings, as eyepieces, sub-stage condenser, etc., were also of aluminium, including the entire mount of the objective shown, which Messrs. Swift believed was one of the first so constructed. The President thought the use of aluminium for the objective mount was greatly to be commended, as it would be n great saving of strain on the fine adjustment, in some forms at least.

Karop believed that one drawback to the use of aluminium was that it was a very expensive metal to work—the screws and racks also had to be made of some harder metal, he thought this difficulty might be met to some extent by making an alloy of aluminium with some other metal which would give it greater hardness, while retaining some of the advantages of lightness.

Mr. M. Swift said this could no doubt be done, but as soon as they began to get harder alloys they got them heavier

Mr. Michael said it was easy to make an alloy of aluminium, which was an exceedingly hard metal, but it was not exactly a tough metal, at least so he found some years ago when he was considering the possibility of making a microscope of this kind. He thought, however, that the great value of this light weight was where they wanted a travelling microscope—for it did not much matter in the case of one which was to be used at home; but if there were to be steel parts introduced, were there any means taken to prevent these from rusting?

Mr. M. Swift said the working parts were always lubricated with oil, and this was found sufficient to prevent rust. He might also say that when Mr. Michael approached them some years ago on this subject, the aluminium which they were then able to get was much more difficult to work than the kind they were able to obtain now.