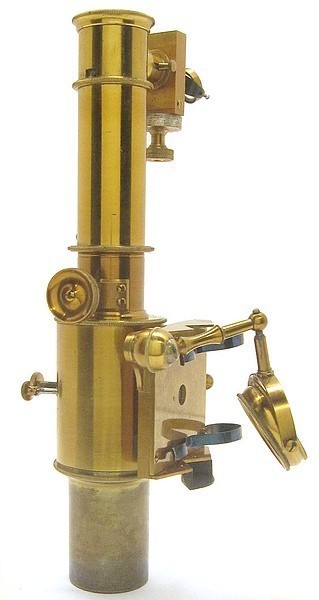 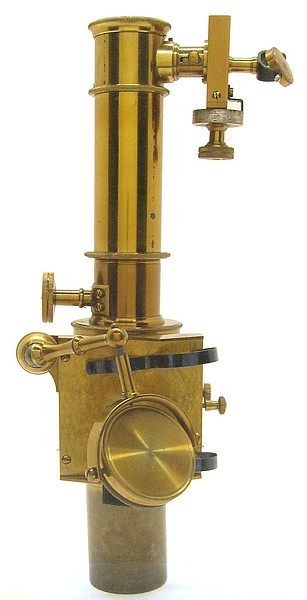 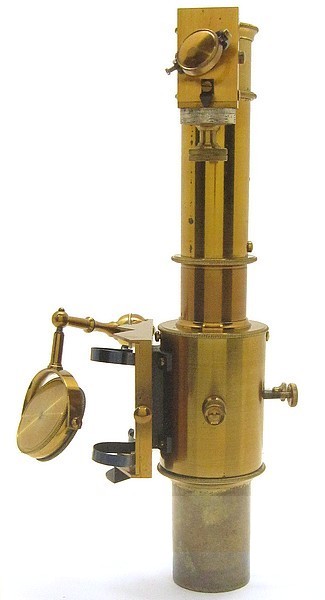 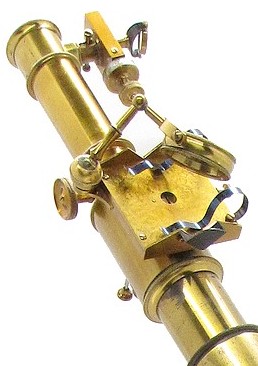 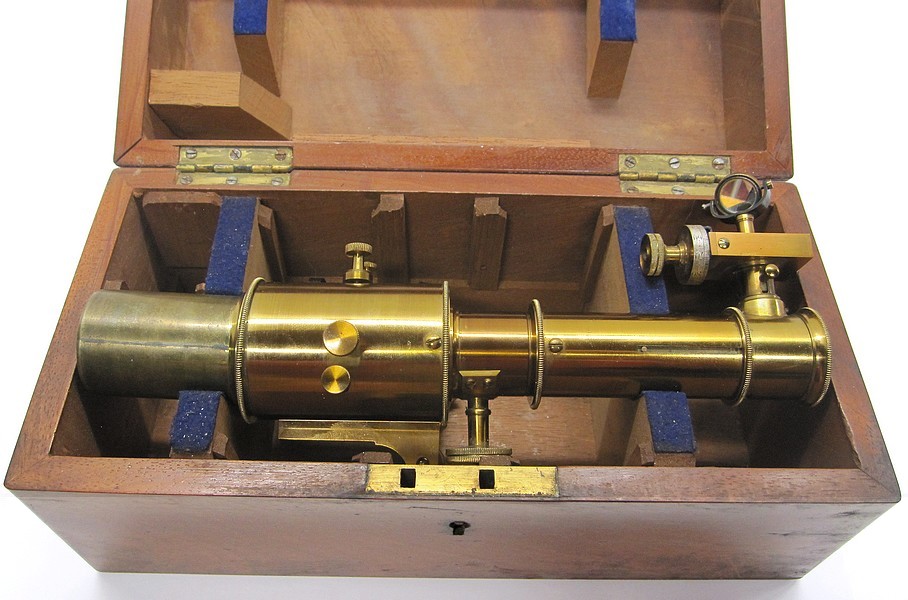 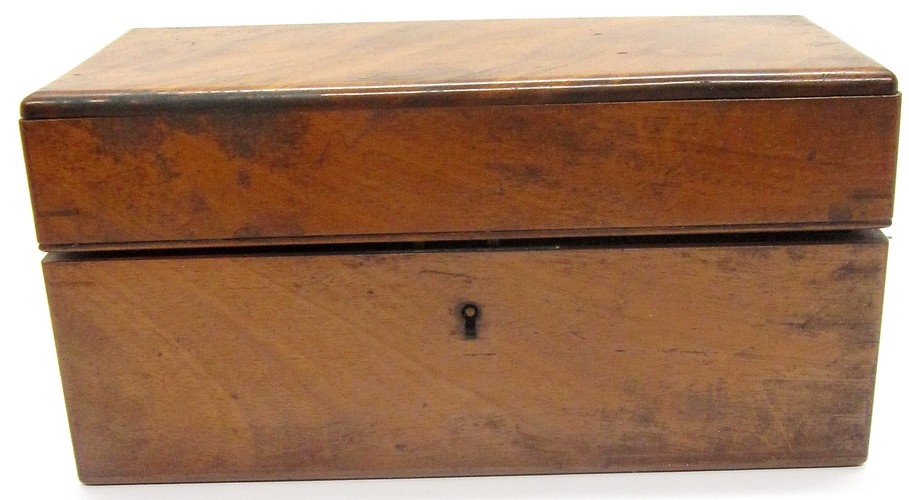 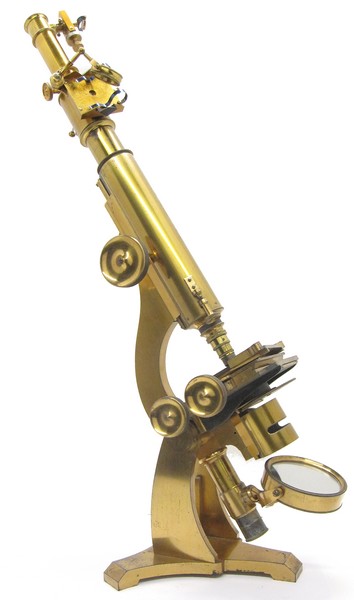 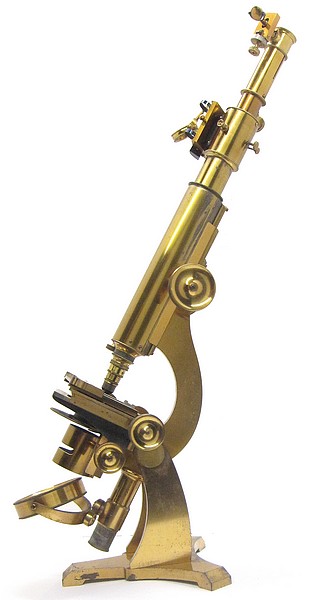 Microspectroscope shown mounted on a microscope by Thomas Cooke, York.

While this instrument is unsigned by the maker, it is identical in all respects to examples signed John Browning, London.

The following is from Spectrum analysis in its application to terrestrial substances by H. Schellen, 1872. 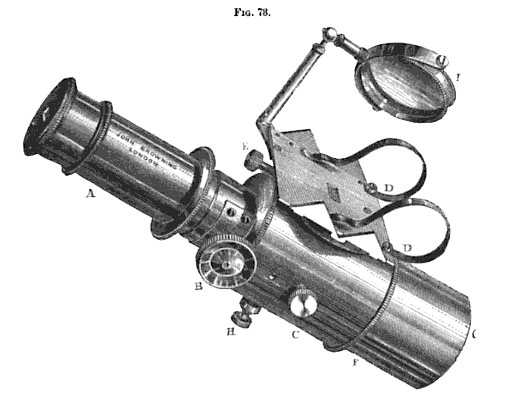 The object of this instrument is to facilitate the accurate observation of the absorptive phenomena of the smallest solid and liquid bodies, such as are prepared for microscopic examination a corpuscule of blood, for instance. Sorby, with the assistance of Browning, has so arranged the spectroscopic part of the instrument that it can be applied to any microscope by fixing it in the place of the ordinary eye-piece so that the spectroscopic investigation of an object can be pursued without any change in the manner of using the instrument. In a complete instrument a contrivance is attached to the side by means of which the substances to be investigated may be compared with the spectra of known substances: this apparatus consists of a small stage, a prism for comparison (38), and a movable scale for measuring accurately the places of the absorption bands.

Fig. 73 shows a perspective view of the whole instrument, as fitted to slide into the upper tube of the microscope in place of the eye-piece; Fig. 74 gives a section showing the internal construction ; and Fig. 75 gives a section through the plane of the two screws C and H, exhibiting the slit with its contrivances for adjustment and the prism for comparison.

The tube A encloses a second tube carrying a direct-vision system of five prisms c, and an achromatic lens l (Fig. 74); by means of a milled head B, with screw-motion, this inner tube can be moved up and down, so that the slit situated in the plane of the screws C and H may be in the focus of the lens I; consequently the rays from the slit, after passing through the lens, fall parallel on to the prisms. 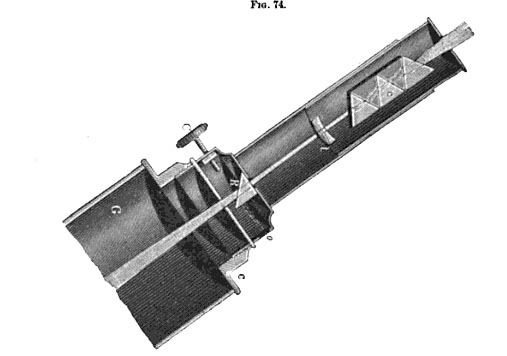 Fig. 74; Section of the Microspectroscope.

D D is the stage on which the objects for comparison liquids between plates of glass or in small tubes are secured within notched edges, by means of metal springs, which hold the small glasses in such a position that the light falling on them from the side, after its passage through the liquid, reaches a square opening in the middle of the stage, whence, as Fig. 74 shows, it passes through a side opening o into the inside of the principal tube, and falls upon the reflecting prism R, which acts as a prism for comparison. When the apparatus for comparison is not required, the square opening in the stage D D is closed by a sliding plate by means of the screw E, so that the side-light may be shut out of the instrument. 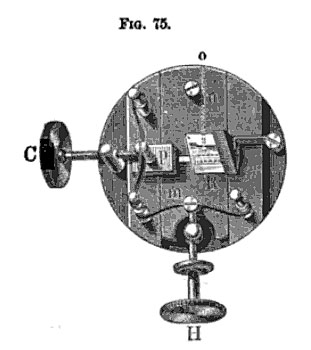 Fig. 75: Adjustment for the Slit in the Microspectroscope.

Fig. 75 gives a section through the plane of the slit between the screws C and H. The piece n is fixed, while m is movable, by means of the screw H and an opposing steel spring, which serves to widen or narrow the slit. Close over the slit is a covering plate p, which is moved backward and forward by the screw C and a spring acting against it, thus enabling the slit to be lengthened or shortened. The reflecting prism R covers a part of the slit; if this slit be open, and the light from the object for comparison fall from the side at o upon the prism R, it will be reflected back, and be thrown upon the system of prisms e, together with the light coming through the open part of the slit from below (Fig. 74). In this way two spectra are received in juxtaposition, one produced by the light passing through the tube G, the other by the light which has been transmitted through the known liquid upon the stage D D.

An example of the Sorby-Browning microspectroscope similar to that described above is represented in this collection. A refined version of this instrument was also sold having a bright-line micrometer, which allows the calibration of the observed absorption spectra relative to the Fraunhofer lines seen in sunlight. Such an instrument is the one shown on this page. Its use and function were described in the book The Microscope and Its Revelations By William B. Carpenter, 1875 as follows: 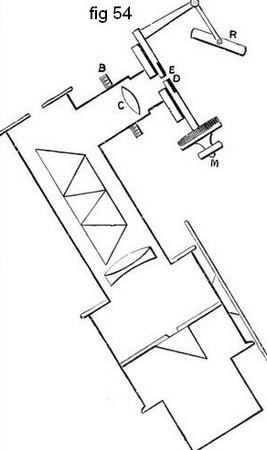 The best contrivance for measuring spectra of absorption bands is Browning’s Bright-Line Micrometer, shown in Fig. 54. A is a small mirror by which light from the lamp employed can be reflected through E D to the lens C, which, by means of a perforated stop, forms a bright pointed image on the surface of the upper prism, from whence it is reflected to the eye of the observer. M is a wheel and milled-head. Its rotation carries the bright point over the spectrum, and the exact amount of motion may be read off to the 10-1000 on the graduated circle of the wheel. To use this apparatus, the Fraunhofer lines must be viewed by sending bright daylight through the spectroscope, and the positions of the principal ones carefully measured, the reading on the micrometer-wheel being noted down. A Spectrum-map may then be drawn on cardboard, on a scale of equal parts, and the lines marked on it, as shown in the upper half of Fig. 55. The lower half of the same figure shows an absorption-spectrum, with its bands at certain distances from the Fraunhofer lines. The cardboard Spectrum-map. when once drawn, should be kept for reference.

A similar instrument is located in the Science Museum, London.