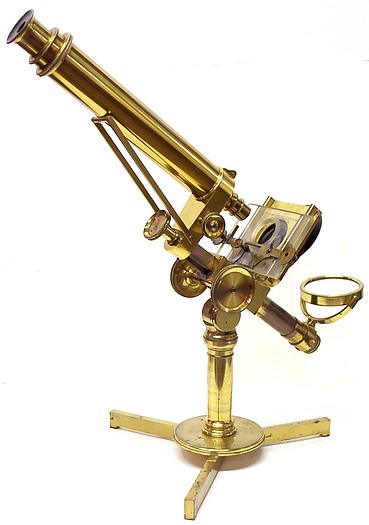 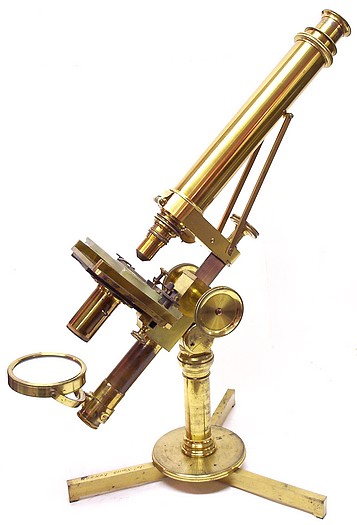 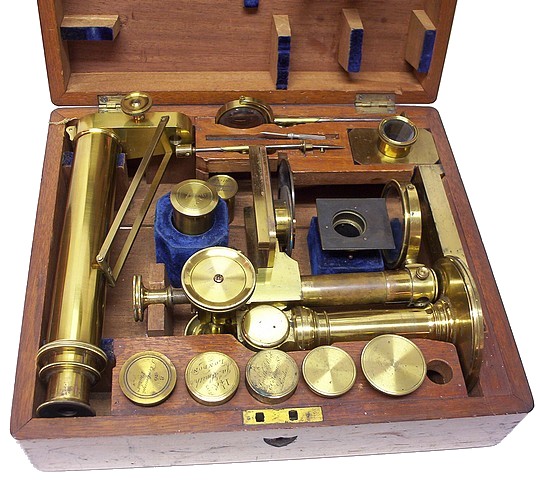 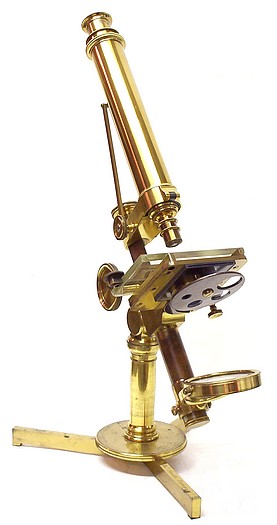 This microscope is signed on one leg of the folding tripod base, Jas. Smith, London, 109. James Smith was one of the three premier English microscope manufacturers of the Victorian era (the two others were A. Ross and H. Powell). He initially worked as foreman for W.Tully & Sons in the early 19th century where he constructed the brass work for the achromatic microscope designed by Joseph Jackson Lister in 1826. With the help of Lister, around 1840, he established his own firm. By 1847, Richard Beck, nephew of J. J. Lister, became a partner in the firm and was shortly followed by his brother, Joseph Beck, in 1852. After the retirement of Smith around 1864, the firm was known as R&J Beck.(1) 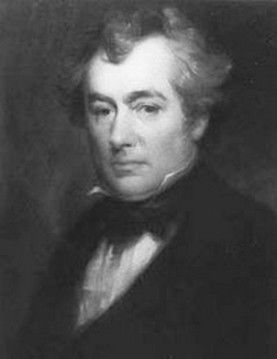 In researching this microscope, it became apparent that it has considerable historical interest with respect to American medicine. This microscope was the instrument used by Robley Dunglison (1798-1869), America's first full-time professor of medicine. Dunglison was the personal physician to Thomas Jefferson, James Madison, and James Monroe and consulted in the treatment of Andrew Jackson. Dunglison was trained at various institutions in England, Paris, and Germany after which he established a practice in London. In 1825, at the invitation of Thomas Jefferson, he was invited to join the faculty as Professor of Medicine at the newly formed University of Virginia, where he taught anatomy, physiology, materia medica, and medical jurisprudence. In 1833, he left that institution and spent the next three years at the University of Maryland. He then moved to the Jefferson Medical College in Philadelphia and remained there for the rest of his career. He was a prolific author and dedicated teacher. His textbook on physiology, first published in 1832 and updated in many editions, was the first of its kind by an American author. It earned him the title "The Father of American Physiology".(2)

Evidence that this microscope was the property of Robley Dunglison first became apparent after consulting the Smith & Beck delivery books.(3) Reproduced above is the entry concerning the Smith microscope with serial number 109. The entry states that it is the "small microscope" model and that it was sold to "Dr. Dunglison" on Sept. 18, 1845. It remained to be established that this person was the physician Robley Dunglison. My purchase of this instrument was made from a source that provided information that suggested that the microscope has resided in the USA since the 19th century. In his autobiography, Dunglison states, "In the year 1844, being desirous of obtaining a good English microscope, I wrote Dr. Forbes, who entrusted the superintendence of its formation by Messr. Smith & Beck to Dr. Carpenter,- himself an excellent microscopist. I received it safely, and it gave me great satisfaction".(4) The Dr. Carpenter referred to in the above quote is William Benjamin Carpenter (1813-1885), the physician and naturalist, who is best known to historians of the microscope from the numerous editions of his classic work The Microscope and Its Revelations. The Dr. Forbes, also referred to in the above quote, is the Scottish physician Sir John Forbes, FRS (1787-1861); among his important accomplishments was the appointment as court physician to Prince Albert and the royal household.(5) Additionally, Dunglison wrote in 1850, when discussing the histology of hair follicles, "the author has had repeated opportunities for confirming it with his own admirable microscope made by Smith of London".(6)

It appears Dunglison had at least some access to a microscope prior to his purchase of this Smith microscope. In the famous experiments carried out by William Beaumont on the physiology of digestion,(7) Beaumont studied an employee of the American Fur Co., Alexis St. Martin, who had a permanent gastric fistula due to an accidental shotgun injury; Beaumont recorded his observations in his 1834 book.(8) He wrote, with respect to the microscopic examinations of the gastric juice, "The following Microscopic examinations were made with Jones' compound Microscope, in the presence of Professor Dunglison and of Capt. H Smith, of the Army". J. H. Cassedy, in his article about the early use of the microscope in American medicine,(9) appears to have made the assumption that the microscope referred to in the above quote was provided by Professor Jones of Columbian College, but in fact, Beaumont does not mention the source of the microscope and, on the contrary, Dunglison states in his autobiography that he provided the microscope and performed the examinations.(10) Might the "Jones' compound Microscope" referred to in the quote be what was (and still is) known as a Jones Improved or Jones Most Improved Microscope? These were among the most popular models of the period. This would suggest that prior to the purchase of the James Smith microscope, Dunglison only had access to this earlier form of a non-achromatic microscope. It was soon after this period in America and elsewhere where the value of the achromatic microscope for the study of the medical sciences was just beginning to become more apparent.(9

Another impetus for Dunglison to purchase a new instrument could have been the review of the latest edition of his book Human Physiology.(11) In an overall favorable review, Dr. John Forbes, referred to above, wrote, "There is only one department in which we think his work deficient; and that is in regard subjects of microscopical inquiry. From various hints let fall by him we infer that be has not been in the habit of using the microscope, in the present improved form at least, and that he is consequently unable test and verify the observations in which the last few years have been so fertile. Hence we find him expressing doubt on some points which, we think, have been satisfactorily determined; and speaking confidently as to others, on which we should have felt more hesitation". (12) It appears that Dunglison took this criticism to heart since, in the same year, he sought the help of Dr. Forbes in obtaining the Smith microscope, the cost of which was 18 pounds.(4) 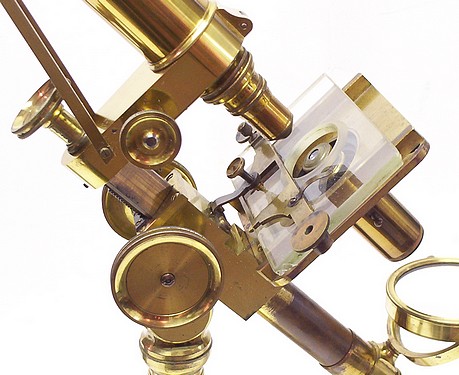 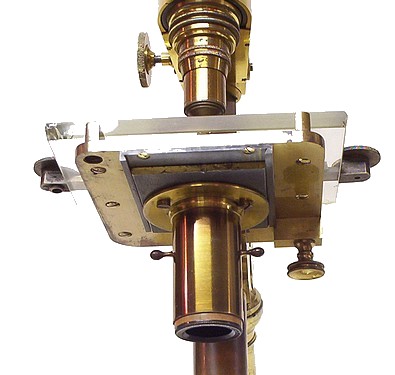 It is of interest to note that the upper portion of the stage of this microscope has been professionally altered from the original brass type of stage that was usually supplied on Smith microscopes of the period (see above). The modification consists of the addition of a glass and brass slide carrier identical to those first used by the optician Joseph Zentmayer of Philadelphia (established in 1853) with his United States Army Hospital model microscope introduced in 1863. Since Dunglison and Zentmayer were located in the same city and since Zentmayer was the foremost optician in the city, it is reasonable to assume that they may have been acquainted and thus, it is plausible that Zentmayer incorporated his stage at the request of Dunglison. The modifications have been made in such a manner that the original accessories supplied by Smith can still be used with the microscope. These accessories include a 1/8 objective, a 1 1/4 - 2/3 divisible objective, two Lieberkuhns, one eyepiece (of originally two), a sub-stage wheel of diaphragms, a sub-stage adapter that allows an objective to be used as a focusing condenser, a stage condenser, a stage forceps, and a live box. At about the time the stage was modified, some additional objectives (made by Spencer, Zentmayer, R&J Beck, and Hartnack) were added to the set to compliment the original lenses supplied by Smith.

Overall, the microscope has a very interesting design for a James Smith microscope. Apparently, this model was unknown to Nelson when he wrote about the microscopes of James Smith in 1900.(1) Additionally, this "small microscope" model was also unknown to R. H. Nuttall as stated explicitly in his more recent discussion of the James Smith microscopes.(13) While researching the museum collections available to me, I have been unable to locate an example exactly like this one. The instrument appears to be designed with the idea of portability in mind, given that it and the accessories can be stored in a compact manner within the case. The instrument is characterized by a bar-limb construction with the fine adjustment knob located on the side of the limb, which has two struts supporting the tube. It is curious to find this design from a maker who by 1840, usually favored, and was known for, the use of the Lister limb. In fact, one can say that he was influential in the adoption of this type of limb by other manufacturers.

It should be mentioned that the Smith and Beck delivery books make a distinction within the class of "small microscopes"; some are listed simply as "small" while others are listed as "plain small" or "small best".(3) The Smith microscope with serial number 141, manufactered in 1846, is also characterized in the delivery books as a "small microscope"; it now resides in the Billings collection and is shown in fig 400 in the catalog.(14). This microscope has a number features common with #109. In particular, #141 has the same struts supporting the tube and the same folding tripod base, but the location of the fine addjustment is on the top of the limb and the body of the microscope is supported on a double pillar, not a single as with #109.

It is both a rare and gratifying opportunity for a collector of these old microscopes to be able to obtain an instrument that has an association with such an important individual.

See this essay on the life and work of James Smith