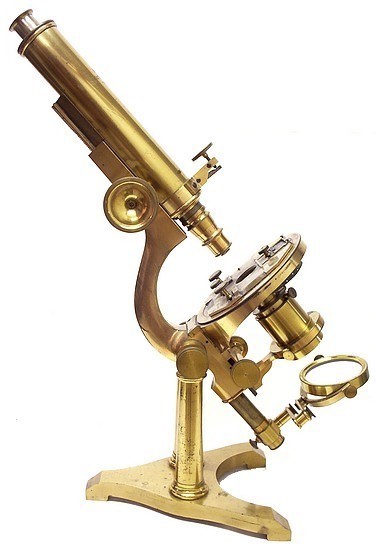 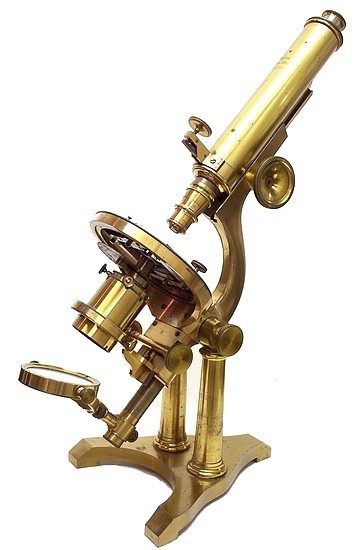 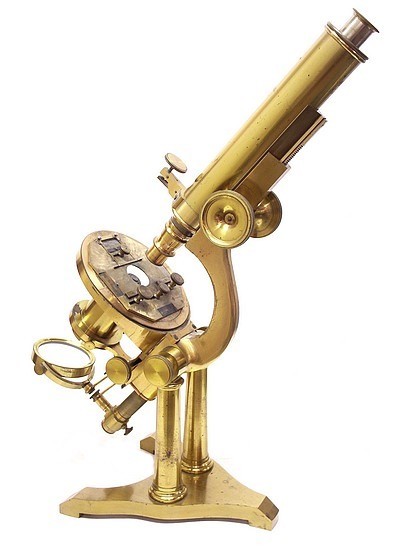 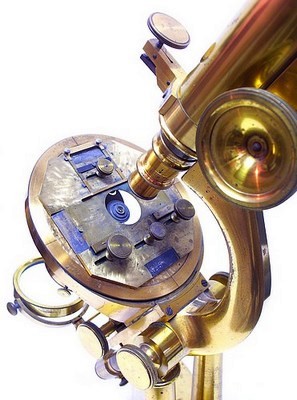 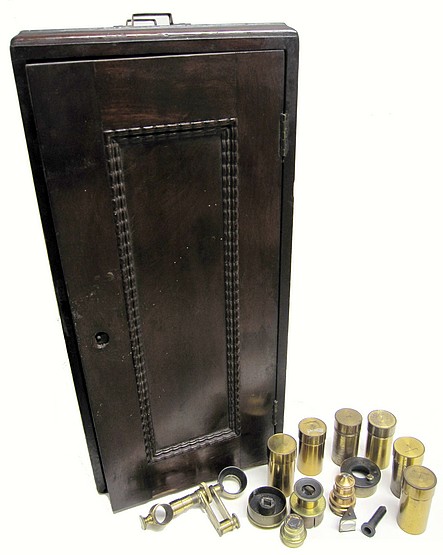 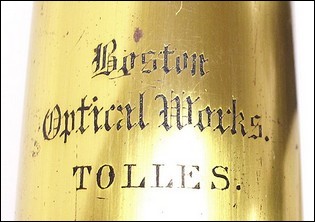 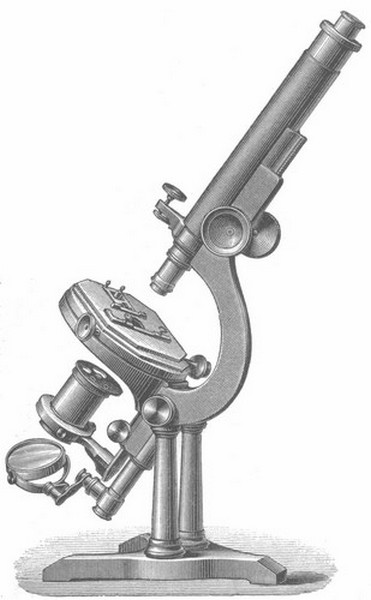 The following was extracted from the Tolles catalog:

This instrument is intended to meet the wants of the highest scientific investigation; to attain everything that the microscope can accomplish, without sparing the cost, and to permit the use of all the modern accessory apparatus. Like all of Tolles's' microscopes, it is constructed on the curved arm (Jackson ) model, which Dr. W. B. Carpenter, in his elaborate work on "The Microscope", fourth edition, 1868, preferred over all other models; and in 1870, at a meeting of the Royal Microscopical Society, of London, still more emphatically approved in special communication, giving his reasons for thus in endorsing it. The instrument is eighteen inches high, weighs about fourteen lbs., thus giving a stability and freedom from tremor that cannot be obtained with stands of little weight. It is of simple construction, with fewer screws and pieces than any other first-class microscope. The curved arm is supported on a steel arbor between two strong brass pillars, made for durability, and not liable to get out of order, and provided with a method of compensation for wear. The arm is easily clamped and held in any position. and is readily removable. Has rack and pinion for coarse, and micrometer screw for fine adjustment for focus; graduated draw tube; sub-stage with rack and pinion, and centring screws for accessory apparatus; plain and concave mirrors, on double. jointed arm, Tolles's thin stage, admitting light of great obliquity, with rectangular movements by screw and rack and pinion, and rotation on the optical axis of about 325 degrees that is essentially necessary. Price, $225.

N.B. A newly devised mechanical stage, with rectangular movements throughout one inch of field, with rotation 360 degrees in the optical axis. Price $200. 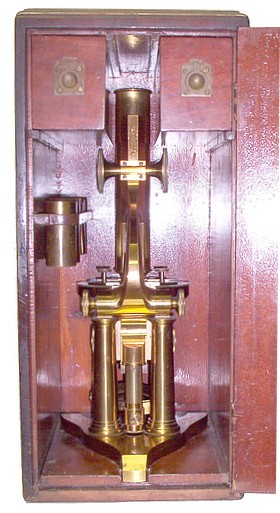 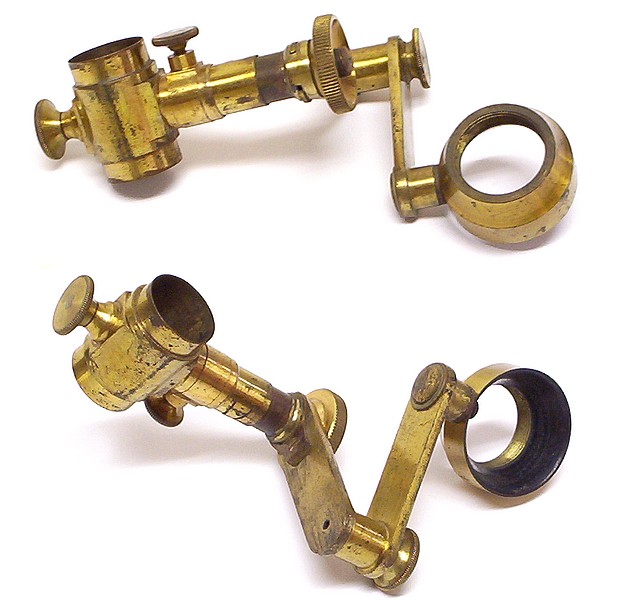 The above accessory is designed to attach to the bar holding the mirror while the other end has a fitting with a "Society Screw" which will hold an objective, but what is the function of this apparatus? Might it have held a prism to serve as an alternate for the mirror?

The following was extracted from The National Cyclopedia of American Biography, vol. XIII, 1906. 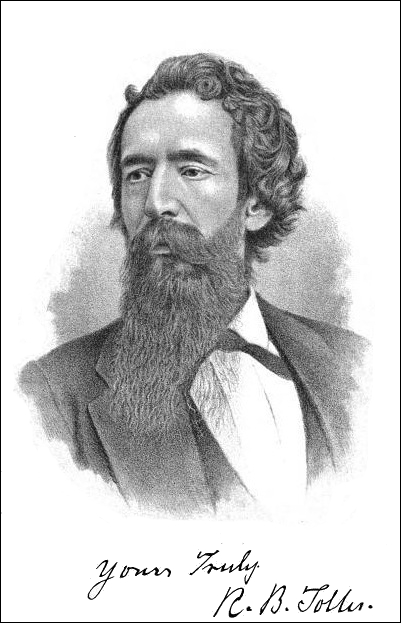 TOLLES. Robert B., lensmaker, was born in Winchester, Litchfield co., Conn., about 1825, son of Elisha and Harriet Tolles. His father was an inventor, but from lack of funds was unable to develop any of his ideas. The son was educated in the common district school and passed his boyhood at home and on his grandfather's farm near by, working to aid in supporting the family. In 1813 while in Canastota, N. Y., he accidentally visited the workshop of Charles A. Spencer, and soon afterwards he entered the service of the celebrated lensmaker as an apprentice. Under the instruction and guidance of this remarkable man young Tolles learned the special business in which he displayed such genius. In 1858 he started in business on his own account in Canastota, removing to Boston, Mass., nine years later, where he organized the Boston Optical Works. He was affiliated with this company the remainder of his life, for the first four years as superintendent and thereafter as sole proprietor. His one aim in his business was the improvement of the microscope, and his achievements in this line prove that he was well qualified for the task by his " great theoretical and practical knowledge of the science of optics, united with mechanical and inventive genius and marvelous skill of eye and hand." While still in the service of Mr. Spencer he devised a cover correction for objectives, and invented and patented a solid eye-piece. In 1858 he made his first immersion objectives, and objectives with two fronts one to be used as an immersion and the other dry, and in 1866 he obtained a patent for a stereoscopic binocular eye-piece. He invented many other devices and appliances for the microscope, as well as some telescopes remarkable for their short focal length in proportion to the diameter of object-glass and for their defining and penetrating power. The great step, however, which placed him, together with Charles A. and Herbert R. Spencer, at the head of his profession, was the construction in 1873 of an immersion one-tenth objective with an aperture greater than that corresponding to infinitely near 180 degrees in air. It was a three system lens which had an aperture of more than 110 degrees in balsam, or 1.25 N. A., and which is said to have produced " a revolution of opinion and practice among users and makers of microscopes all over the world." At the same time he also made his first lens of the duplex front formula one-fifth inch glycerine immersion of 110 degrees balsam angle. On Aug. 10, 1883, he was elected an honorary member of the American Society of Microscopists. Notwithstanding his valuable achievements, the last ten years of his life were years of suffering and hardship; he worked at his bench when he should have been in his bed, denying himself all the luxuries and many of the comforts of life. He greatly suffered from a disease of the lungs which was contracted at an early age and which caused his death. During his last illness, he had a microscope brought to his bedside and there on his deathbed examined and tested the lenses. Only a few minutes before his death he was occupied in correcting the degrees of aperture of an imaginary lens and when he reached 150 degrees, he stopped, turned his head and said faintly, "Goodbye. He was married in 1853 to Freelove S. Dickey, but was left a widower a few months later. He died in Boston, Mass. Nov. 17, 1883.

For an additional discussion of the life and work of Robert B. Tolles (1824-1883), see Three American Microscope Builders published by the American Optical Company 1945. Also see the essay: The Aperture War-Research and Notes by Jim Solliday and the article Robert B. Tolles and the Angular Aperture Question (Proceedings of the American Society of Microscopists, Vol. 6, (1884), pp. 5-39)