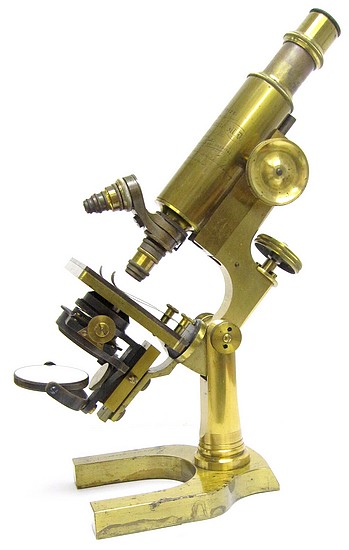 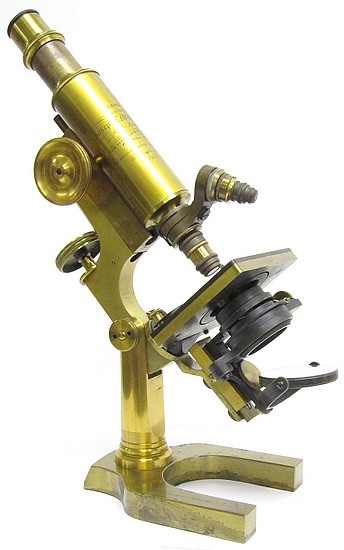 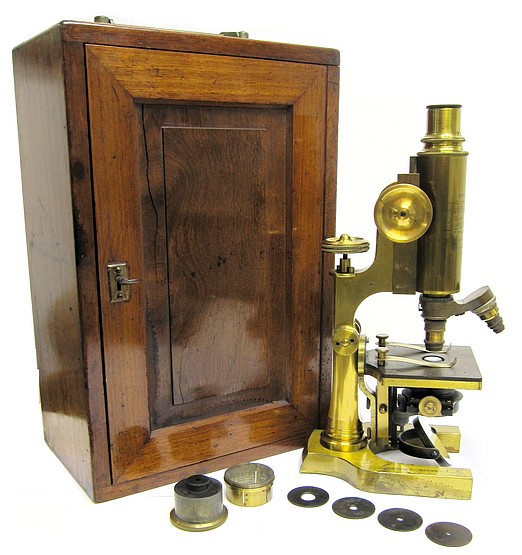 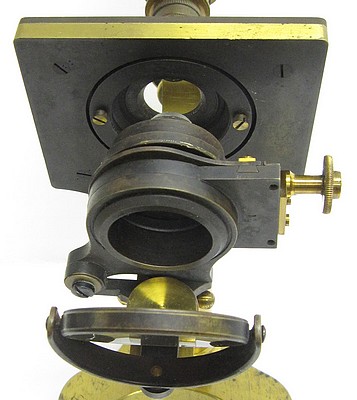 When found, the microscope lacked its original objectives. Two Hartnack objectives were added to complete the microscope. Schrauer microscopes were often supplied with lenses from this firm. Schrauer never made his own optics. Sometime in the early history of this microscope the substage was upgraded in a professional manner. Originally, the substage consisted of a screw-in adapter which held an aperture stop holder having three stops. This was converted to a focusing Abbe condenser which allowed the use four aperture stops below the lens of the condenser. The condenser was arranged to allow off-center movement of the apertures by rack and pinion in order to utilize oblique illumination.

Leopold Schrauer first began the manufacture of microscopes in Boston. By 1877, he was located in New York City at various addresses. Schrauer microscopes are relatively uncommon. 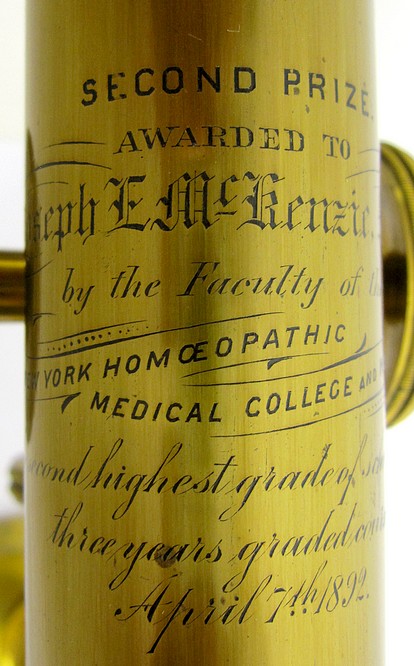 The tube of the microscope is engraved:

Second Prize
Awarded to
Joseph E. McKenzie, M.D.
by the Faculty of the
New York Homeopathic
Medical College and Hospital
for the second highest grades of scholarship during
the three years graded course
April 7th 1892

The following note appeared in The Medical Visitor, Vol. III, 1892

The commencement exercises of the New York Homoeopathic Medical College and Hospital were held April 7th. Exercises opened with prayer by the Rev. Dr. Bolles. Prof. T. F. Allen, dean of the faculty, delivered the introductory address. Judge Rufus B. Cowing, president of the board of trustees, conferred the degrees. Dr. L. L. Danforth, secretary of the faculty, awarded the following prizes: First faculty prize, a microscope, valued at $100, for the highest average during the entire three-years' course, to John T. White of Salt Lake City; second faculty prize, a microscope, valued at $50, for the next highest average, Joseph E. McKenzie, of Caledonia; the Wales prize, a case of surgical instruments, for the highest standing in all the junior and middle studies, Frederick W. Wall, of the senior class. There were thirty five graduates

For more information about these prize microscopes see the article: