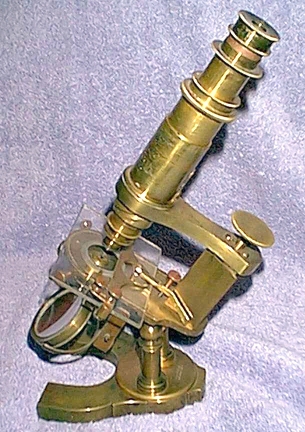 In 1875 it was announced by the officials of the New York Homeopathic Medical College "In order to extend every incentive to the students for diligence and proficiency, it has been deemed proper to offer to that member of the graduating class who stands highest in the examination scale a faculty prize, which, for the session 1874-75, was a valuable microscope"1 and so this custom continued for the next 40 years. This article is about this practice and it describes six of these prize microscopes that have surfaced in recent years.

In 1860 a group of concerned citizens led by William Cullen Bryant, the noted poet, abolitionist, and newspaper editor, founded the New York Homeopathic Medical College. Bryant was a follower of homeopathy and the establishment of the college was a reaction to both the needs of the people of New York and to the harsh methods of the common medical practices of the time. The school was located at the corner of 20th Street and Third Avenue in NYC. From its beginning with 59 students and a faculty of 8, the college expanded rapidly. By 1872 the college had moved to larger facilities located at 23rd Street and Third Avenue by acquiring the New York Ophthalmic Hospital and in 1875 the college began an association with the Metropolitan Hospital on Wards Island. The college had decided to build its own hospital and in 1889 the Flower Free Surgical Hospital was constructed at York Avenue and 63rd Street. At that time, the name of the institution was officially changed to "The New York Homeopathic Medical College and Hospital". In 1918 the college absorbed the New York Medical College and Hospital for Women, an institution with an equally distinguished history. Finally, a merger between the college and the Fifth Avenue Hospital occurred in 1938 and the institution became, as it is known today, the New York Medical College.2 The archives of New York Medical College still retain some documents relating to its early history and it is from these archives that some of the information presented here was extracted. 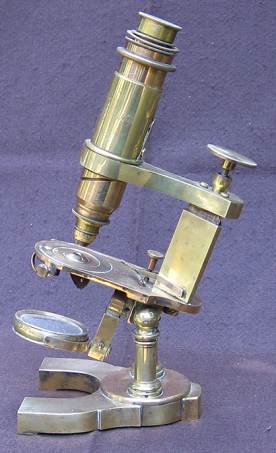 The one of the earliest of these prize microscopes that have come to light is shown in Figure 1. It is signed on the base GEO. WALE PAT'D JUNE 6 1876 and is engraved on the outer tube

The microscope has a number of original features that are outlined in the US patent 178391. The coarse adjustment is accomplished by twisting the tube and is made possible by means of a spiral groove cut into the tube that rides on a guide attached to the outer tube. A similar method is known to have been used on of the simpler microscopes of J. Grunow and the Miller Brothers.3 The fine adjustment is of the continental type using a new mechanism which is described in the patent. The centering mechanism of the substage and a new form of iris diaphragm are also described in the patent. This iris diaphragm was used on later stands by Wale such as his famous radial "New Working Microscope" and later by firms such as Bausch & Lomb (which purchased the Wale patents4) and by Queen in the Acme line. Additionally, the microscope has the interesting attribute where the upper portion of the stand can rotate on the base allowing extra stability when inclined. The stage has a brass and glass slide holder. The microscope was cased with a number of accessories that included two G. Wale objectives, two eyepieces, a camera lucida, and a stage forceps mounted on a wood plate.

Recently, the prize microscope awarded in 1876 has surfaced. It is shown in Figure 2. It is inscribed on the tube: 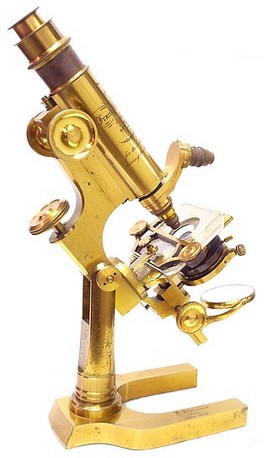 The first prize microscope for 1889 is shown in Figure 3. The microscope is signed the base: L. Schrauer, Maker, New York and is engraved on the tube:

First Prize
Awarded to
Frank Caudkins Bunn, M.D.
by the Faculty of the
New York
Homeopathic Medical College
and Hospital
for the highest grades of scholarship
during the three years graded course
May 18th 1889

The engraving is artfully done with swirls and flourishes. The microscope, with its horseshoe base and decoratively turned and tapered pillar, resembles the continental model that was increasingly becoming more popular at that time. However, the microscope differs from the standard continental microscope in an important way. In the continental model, the fine adjustment mechanism moves the entire limb along with the body-tube. With this Schrauer model however, the fine adjustment is actually a spring-loaded long lever mechanism. One end of the lever engages the screw of the adjustment knob while the other end moves the body tube. The limb remains stationary with the steel pivot embedded within. This adjustment mechanism is similar to that used by J. Zentmayer on some of his post-1876 models and later by other makers. The substage of this microscope consists of a rack and pinion adjusting iris diaphragm with centering screws on a swiveling arm. The upper portion of the diaphragm is threaded to accept an Abbe condenser lens. The mirror slides independently on the arm, which can be swung in place above the stage for illumination of opaque objects. The brass stage has a glass and brass slide holder. The microscope came cased with one Leitz and two Hartnack objectives, and two wide diameter eyepieces.

The next two microscopes, coincidentally, were awarded in the same year, 1894. This allows us to compare the first and second prizes. The first prize microscope (see Figure 4) is again signed on the foot L. Schrauer, Maker, New York.
The tube is engraved:

First Faculty Prize
Awarded to
Louis D Hyde, MD
by the
faculty of the New York
Homeopathic Medical College
and Hospital for the
highest grade of scholarship
during the whole course of
three years study
May 3rd, 1894

The microscope resembles the previous model but has been refined in a number of ways. The base is still a horseshoe but here the inner edge has been deeply beveled. The substage condenser focuses by rack and pinion and now the condenser and iris diaphragm are on independent arms allowing each to be optionally moved out of the optical axis (see Figure 5). The stage of the microscope has been simplified; it is now vulcanite with clips. The microscope was found with its case, three Leitz objectives, and two eyepieces, which now have the standard diameter. In addition to a condenser, the microscope was supplied with an aperture stop holder and three stops.

The second prize microscope for 1894 (Figure 6) is also signed: L. Schrauer, Maker, New York and is much like the first prize microscope of the same year but a bit less massive. The tubes on these 1894 stands are engraved in a somewhat less ornate style compared to the 1889 Schrauer. The dedication reads: 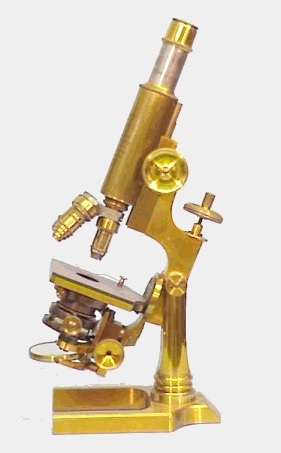 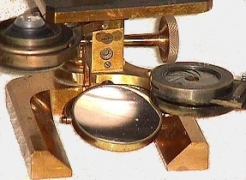 Fig. 5 Substage of the First Prize Schrauer microscope of 1894. Note the independent movement of the condenser and iris diaphragm. 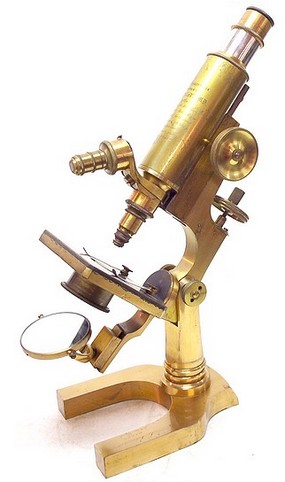 Second Faculty Prize
Awarded to
Frederick Hills Cole, MD
by the
faculty of the New York
Homeopathic Medical College
and Hospital for the second
highest grade of scholarship
during the whole course of
three years study
May 3rd, 1894

The rack and pinion focusing mechanism of the substage has been done away with in this less expensive stand and in its place is an aperture stop holder that is attached to the bottom of the stage. Three stops were originally supplied with the microscope. The other focusing adjustments are the same as in the larger model. The microscope was found with its case, two Hartnack objectives, and one, of originally two, eyepieces. This simplified microscope differs from the standard version of the same microscope in having a wide tube. The extra girth of the tube was evidently needed to accommodate the verbose engraving. An announcement of these awards to Drs. Hyde and Cole was reported in the May 4, 1894 New York Times.

Another second prize microscope, also made by Schrauer,  is shown in figure 7. It is similar in most respects to the 1994 second prize microscope shown above. It was awarded to Joseph E. McKenzie, of Caledonia in 1892. When found, the microscope lacked its original objectives. Two Hartnack objectives were added to complete the microscope. Schrauer microscopes were often supplied with lenses from this firm. Sometime in the early history of this microscope the substage was upgraded in a professional manner. Originally, the substage consisted of a screw-in adapter which held an aperture stop holder which allowed the use four aperture stops below the lens of the condenser. The condenser was arranged to allow off-center movement of the apertures by rack and pinion in order to  utilize oblique illumination. 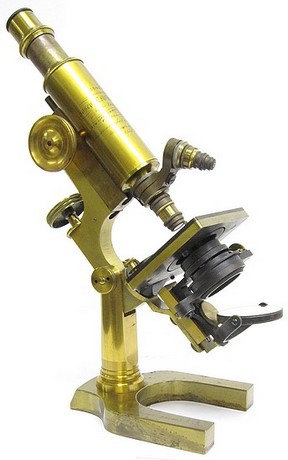 The following note appeared in The Medical Visitor, Vol. III, 1892:

"The commencement exercises of the New York Homoeopathic Medical College and Hospital were held April 7th. Exercises opened with prayer by the Rev. Dr. Bolles. Prof. T. F. Allen, dean of the faculty, delivered the introductory address. Judge Rufus B. Cowing, president of the board of trustees, conferred the degrees. Dr. L. L. Danforth, secretary of the faculty, awarded the following prizes: First faculty prize, a microscope, valued at $100, for the highest average during the entire three-years' course, to John T. White of Salt Lake City; second faculty prize, a microscope, valued at $50, for the next highest average, Joseph E. McKenzie, of Caledonia; the Wales prize, a case of surgical instruments, for the highest standing in all the junior and middle studies, Frederick W. Wall, of the senior class. There were thirty five graduates."

It is clear that each of these Schrauer prize microscopes was a special order that was custom made. The engravings of the dedications are under the lacquer surface and therefore must have been applied before the microscope was finished. It is interesting to speculate on what some of the other prize microscopes were like, particularly those awarded in later years, when factory methods were more common and makers that handcrafted their instruments, such as Wale and Schrauer, were no longer in business. It seems it would have been more difficult to special order such microscopes and one wonders if the later instruments even had an  engraved dedication. Or, possibly, these later microscopes had the dedication on a plaque attached to the case, a practice that was used in earlier years. This would avoid having to special order the stands since the plaque could be applied to the case after purchase. But this is only speculation.

The archives of the NY Medical College do not contain any information about the microscopes that were awarded but the recipients for the years 1874-1916 are on record and a list of them can be viewed here.

The author would like to thank Drs. Stuart Warter, Barry Sobel, and Mr. Jerome Ruskin for kindly providing images and/or information about of the microscopes in their collections. I would also like to thank Ms. Judy Myers, archivist of the NYMC, who was very helpful in retrieving information for this article.