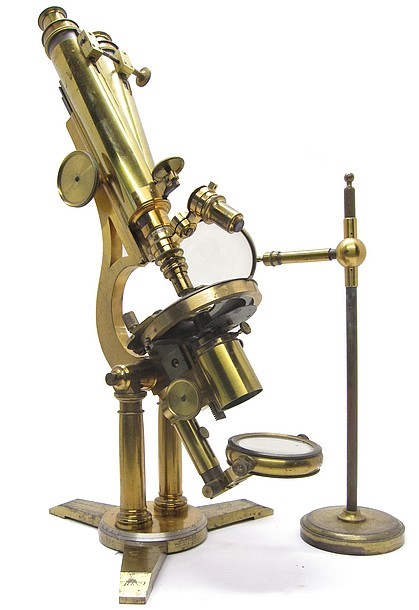 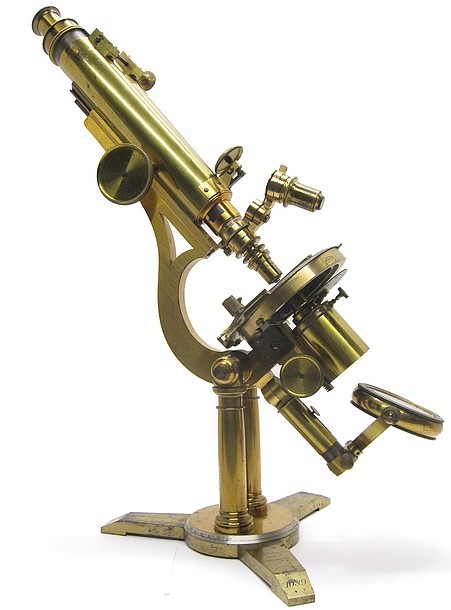 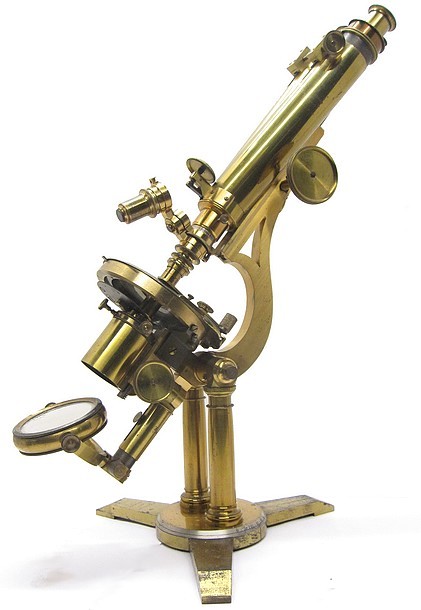 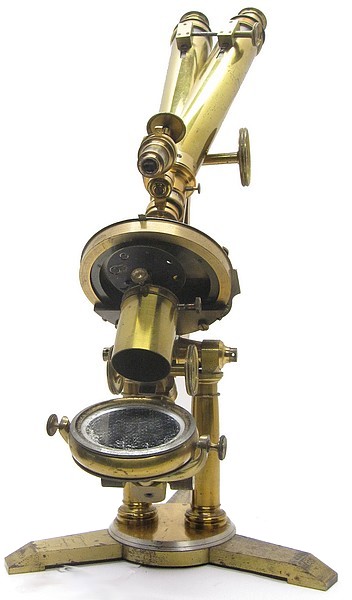 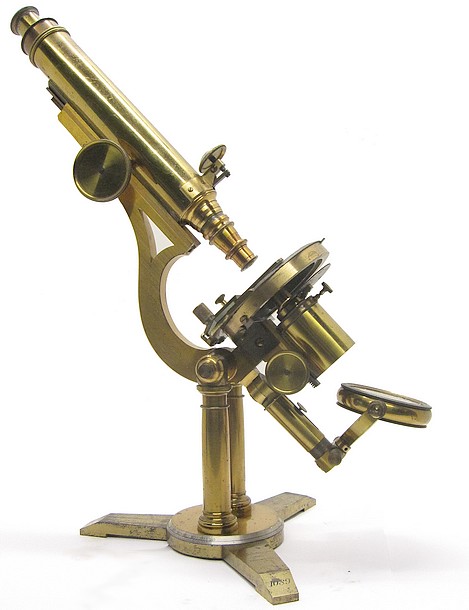 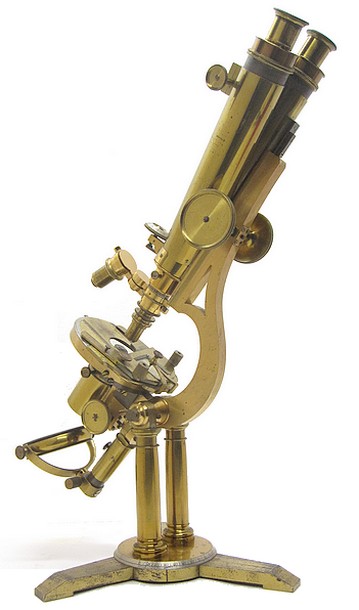 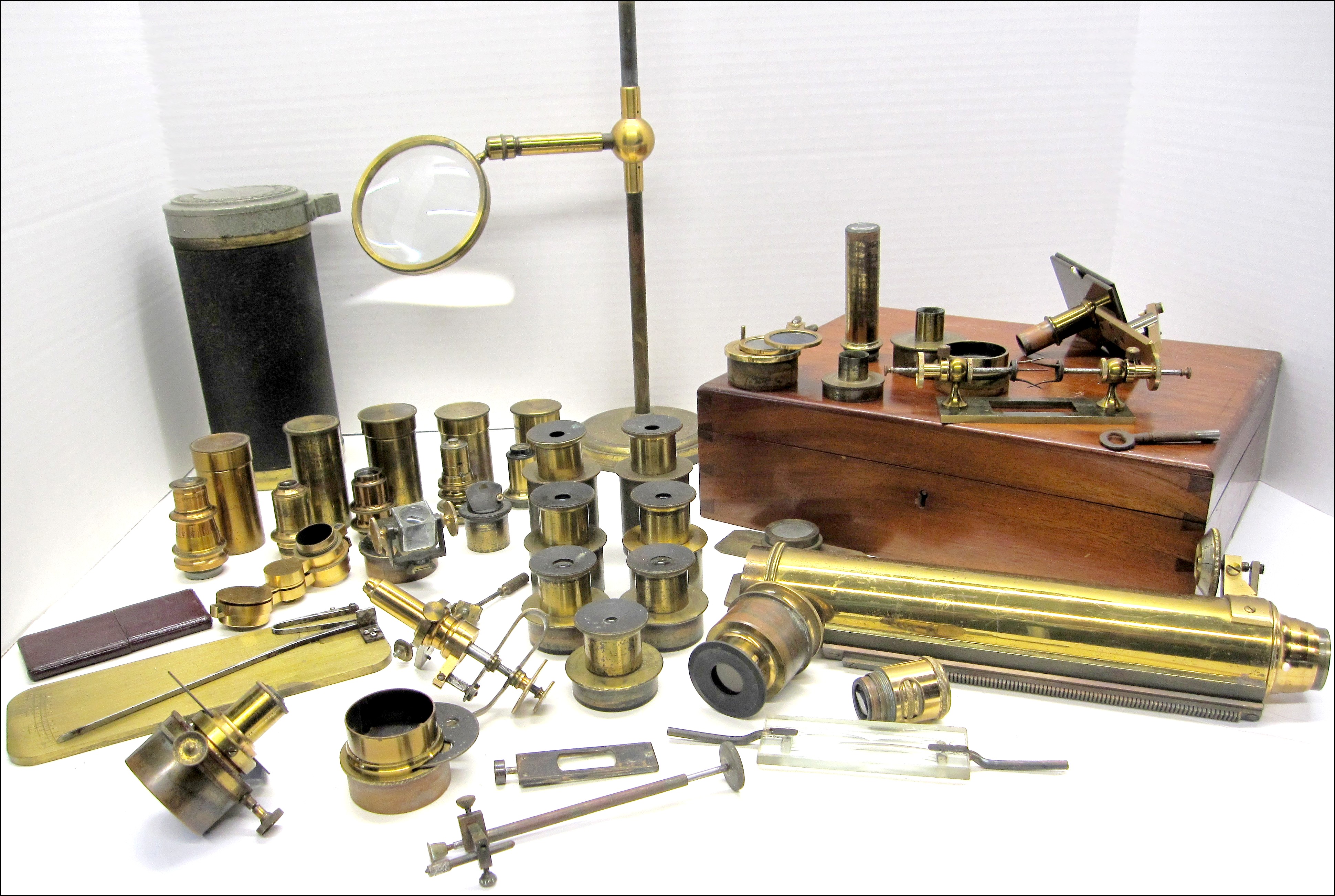 This microscope came with both monocular and binocular tubes. Among the accessories supplied with this microscope are three matched pairs of eyepieces, a single high power eyepiece, an analyzer prism that mounts above the objective, a sub-stage polarizer, a camera lucida, an achromatic condenser with centering adjustments and aperture wheel, a stage forceps, large and small live-boxes, a sub-stage Amici prism for oblique illumination, an eyepiece micrometer, a parabolic illuminator stored in a brass canister (not shown), a Beck type cover-glass gauge, a diamond-tipped tool to cut round cover-glasses, a double objective changer, a Holman's syphon slide, a sub-stage aperture wheel, a sub-stage set of colored glass filters, an erector, a Maltwood finder, a stage mineral holder, Zentmayer’s mechanical finger and diatom stage, adapters to mount the diatom stage, and a large free standing bullseye condenser. In addition, there are five objectives with canisters among which are a Zentmayer 8/10, a Tolles 1/10 immersion (dated 1874), a Beck 1/5, an unsigned lower power objective, and a Wales 3-inch. Originally the set came with two mahogany cases to store the accessories which fitted into slots in the main storage case. While all or most of the accessories are still present, only one of these storage cases survived, although the insert for missing case is still present. This microscope also came with a Fiddian's Microscope Illuminator. 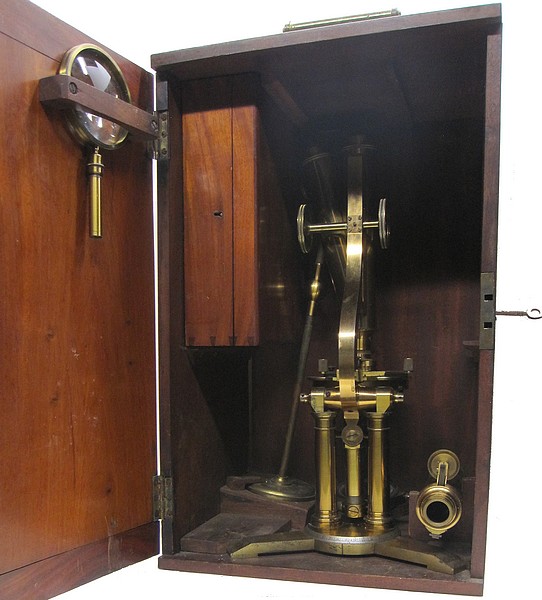 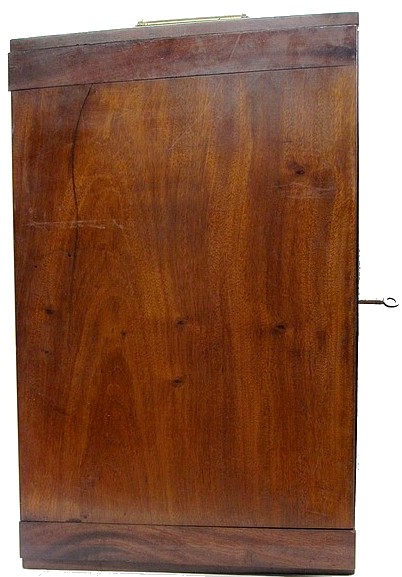 The following text is a catalog description of the monocular version of this model. Most of what is written will also apply to the binocular version as shown in the figure: 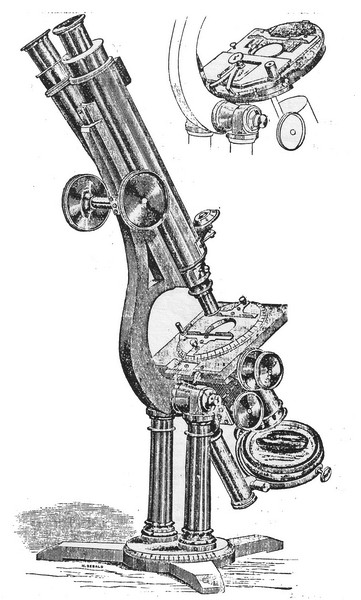 Is eighteen inches high when arranged for use. The instrument is mounted on a broad tripod with revolving platform, beveled, silvered, and graduated in degrees for measuring the angular aperture of Achromatic Objectives. Upon this platform two pillars are planted, which carry the curved bell-metal bar to which the body of the instrument, the stage, the secondary body, and mirrors are attached. The bar supports almost the entire length of the body, giving great steadiness and freedom from tremor. The movement of the body it effected by rack and pinion, connected with two large milled heads, which form the coarse adjustment. It has a graduated draw-tube to receive the eye-piece, erector, and analyzer. A fine micrometer screw with graduated and silvered head, acting on a lever, forms the delicate fine adjustment.

Below the stage is the secondary body, a short tube, perfectly centrical to the main body, and moved by rack and pinion, to receive accessories.

The large plane and concave mirrors are so attached as to facilitate oblique illumination and to swing in one plane to the optical axis of the instrument. To ensure smoothness and durability in the movements, the touching parts are of different metals; one being always of hammered brass, the other of bell metal.

The stage is firm, broad, and steady, and only 3/16 inch thick, giving great facility for extreme oblique illumination. It has rectangular movements of one inch in both direction, operated by milled heads that work upon the same axis, with an additional one on the other side of the stage (not visible in the cut), by which diagonal movements are obtained. Upon the square stage a revolving object-carrier is placed. The beveled and silvered edge of the revolving plate is graduated into degrees, and serves as a goniometer, Graduation are also connected with the rectangular movements of the stage, to indicate the position of an object in view so that, when once recorded, it can be easily refound. 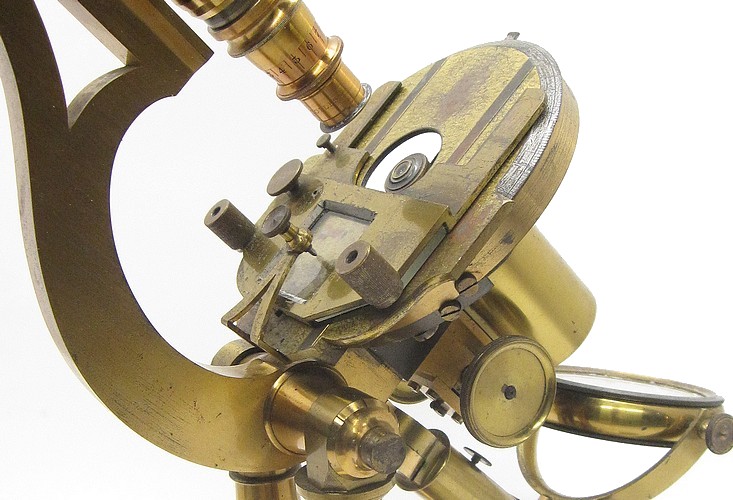 The stage on the example shown on this page differs from the usual mechanical stage mentioned in the above catalog description. In this case, there is a round stage which can be centered and is calibrated with a silvered scale. It is capable of a full 360° rotation. The stage supports a gliding slide holder which is held down by an ivory-tipped screw allowing a smooth hand movement of the holder in any direction. This type of stage was first introduced by Zentmayer in early 1860. See the article written by Zentmayer entitled "What I Know About Late Improvements of the Microscope" published in the Journal of the Franklin Institute, LXXXIV, 1877 where he stated:

"Early in 1860, I made three stands (Nos. 13,14 and 15) precisely like the Grand American, but somewhat lighter. No. 15 was made for a gentleman who was not in favor of mechanical stages, and who desired me to design for him a revolving stage, the object to be moved by hand, and it was for him that I constructed the first of my graduated stages, giving a complete revolution in the optical axis, in a large ring, which is adjustable within another by three screws, in order to have the axis of the stage coincident with the optical axis of the instrument"

The Grand American was the top-of-the-line model produce by Zentmayer until 1876 when production of this model ceased and was replaced by the American Centennial model microscope. Elsewhere of this website is an earlier version of the monocular Grand American microscope and a binocular version with a Beck-type mechanical stage.


This microscope was purchased from a descendant of the original owner, George Edward Smith  (1840-1917). George Edward Smith was born in Rutland, MA and died in Brookline, MA. He was apparently a wealthy man of many interests. He was particularly interested in precious stones having a valuable  collection and in investments in other natural resources and real estate.

Accompanying this microscope is a quantity of wooden collection boxes containing unmounted specimens, mostly insects and insect parts. There is the possibility that these specimens were collected by either by Louis Agassiz or his son Alexander. Sometime after the death of Louis Agassiz, the family of G. E. Smith acquired the Agassiz summer house in Nahant MA where Louis Agassiz maintained a laboratory in a part of the laundry room. Family members recall seeing specimen jars at that location and they believe that it is possible that these boxes were included among the Agassiz specimens. The Nahant house has since been destroyed by a fire.